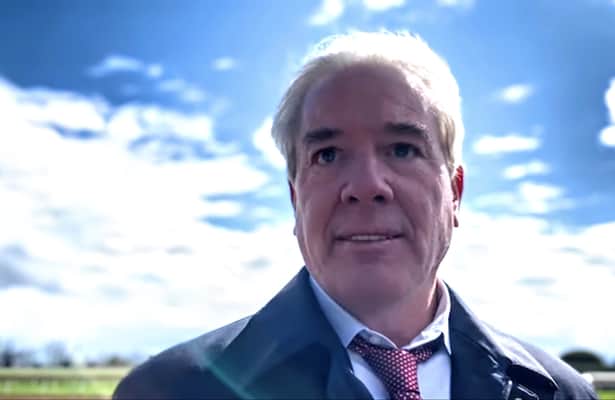 There is a certain inconvenience that the Breeders’ Cup brings to local horsemen whenever it comes to Keeneland. Most get temporary eviction notices, even if they have horses who will be in any of the 14 big races.

Get everything you need for the Breeders' Cup

Wesley Ward, though, did not have to go through that. While so many of his peers had to load up and move to temporary digs on the Rice Road side of the sprawling complex, Ward got to stay put.

“Right here,” he said. “Even when we train out of my tobacco barn, they walk down and come into barn 68 here, and that’s where the riders get off and on. They get on here, they go to the track and train, they come back, they get off, and then the grooms lead them right back up. Even horses that live up at the barn there and come down to train, they’re very familiar with this barn.”

It is the ultimate home game for Ward, 54, who might be best known to casual fans of racing as America’s top ambassador to Royal Ascot every summer. This week he saddles six horses for the Breeders’ Cup, led by the retiring Golden Pal on Saturday in the Turf Sprint.

“He’s been such a special horse to be around,” Ward said this week in an interview for Horse Racing Nation’s Ron Flatter Racing Pod. “The best I’ve had and undefeated here on grass in the United States in all his starts. I’m just really excited to get to the Breeders’ Cup.”

Retirement to his owner’s Coolmore America Ashford Stud in nearby Versailles, Ky., is on the horizon next week for Golden Pal. At age 4, the Uncle Mo colt could join Goldikova and Beholder as the only horses to have won three Breeders’ Cup races. First in both the 2020 Juvenile Turf Sprint and 2021 Turf Sprint, he was made the 2-1 morning-line favorite to go out in triumphant fashion.

“I’m going to be bummed out when he leaves the barn,” Ward said. “He’ll be sleeping not too far from where I’m sleeping every night, so I’ll be over visiting him, giving him peppermints all the time.”

It might not be a routine race Saturday, what with its $1 million purse and championship implications. Nevertheless, Ward will try to keep it business as usual for Golden Pal, who raced over the same 5 1/2 furlongs of grass last month in winning the Woodford (G2) for the second year in a row.

“We’re just going to lead him over right from the same barn,” Ward said. “We’ll put the saddle on, and I’ll wish Irad (Ortiz Jr., his jockey) the best of luck. When you’re running a horse that’s 8-for-8 that’s going to go off the favorite here, that’s where you want to be. That’s where everybody wants to be. … No pressure. Just excitement.”

“The other horses are doing phenomenal,” Ward said. “It’s great to have all three horses coming into a race like this. Campanelle is highly accomplished, especially in Europe (as a Group 1 winner). She just comes off winning a million-dollar race down the road there at Kentucky Downs.

“Arrest Me Red is a serious turf sprinter. He’s been right there in Grade 1 races. In the Jaipur he was just narrowly beaten by Casa Creed, who came from way back and had a great trip and beat me on the square with no excuses. Being all three at their home track, they’re going to really jump up a notch.”

Half of Ward’s six Breeders’ Cup wins have come in the Juvenile Turf Sprint, where he will be looking for his fourth consecutive victory Friday with Love Reigns (4-1). The US Navy Flag filly takes on the boys after she got more than two months off following a win in the $150,000 Bolton Landing at Saratoga.

“I kind of like having spacing with the sprinters,” Ward said. “The more space the better, because they put so much into it. … It helps. When we won last year when I took Twilight Gleaming, my plan was to go over with Campanelle to France and then give her the time and run in the Breeders’ Cup at Del Mar. And she did it, and she won.”

Love Reigns was made the second choice on the morning line behind The Platinum Queen (7-2), the winner of the Prix de l’Abbaye last month in Paris for trainer Richard Fahey.

In the Filly & Mare Sprint, Ward looks for his second triumph, and his first since Judy the Beauty in 2014, when he sends surprising Test (G1) winner Chi Town Lady in search of another long-shot score Saturday against the likes of Ballerina Handicap (G1) victor Goodnight Olive (3-1).

“We got lucky,” Ward said on the day Chi Town Lady won the Test at 17-1. “I told the owners (Castleton Lyon) we were probably going to be running a (long) shot, but I wanted to take one shot from way back and do what she’s been asking me to do, which is make a big charge and a big grind.”

Kimari also could have been in the Filly & Mare Sprint, but Ward decided to send Coolmore’s 5-year-old Munnings mare against males in the $2 million Sprint. That is where reigning division champion male Jackie’s Warrior (4-5) figured to be an odds-on favorite. Coming off a win in the Gallant Bloom (G2) on Sept. 25 in the Belmont at Aqueduct meet, Kimari (4-1) was made the second choice.

“I just think the distance,” Ward said when he was asked why he sent Kimari into the six-furlong Sprint rather than the seven-furlong Filly & Mare Sprint. “Her numbers stack right up with anyone, and this being her home track, everybody else has got to come to her party to dance.”

As big a blessing as having the home-course advantage might be, it has not been an easy year for Ward. In February his house was robbed of 14 trophies, including the 12 he won at Royal Ascot. Eventually they were recovered, but not before they were melted down beyond recognition. Ward also lost three horses in a nearby barn fire that was caused by a lightning strike in March.

Even though he also was shut out in his annual visit to England, Ward said 2022 has been good.

“I won some big races this year,” he said. “The Test at Saratoga and others. It’s been a great year for me. I’ve got some great horses and great clients, and my kids are all doing super, and everybody’s healthy. If you look at the whole, big picture, we’re doing phenomenal.”

Asked glibly if he was just drawing a line through this year, Ward was philosophical.

“Life can’t always be smiles,” he said. “It makes you really appreciate the good times and the good things that happen. It’s not always going to be roses. … If you get up and go to work every day, and you can’t wait to go back the next day, and you don’t want to take a day off, ever, what kind of job is that? That’s a dream job.”