Breeders' Cup Turf Sprint: Who are the fastest contenders? 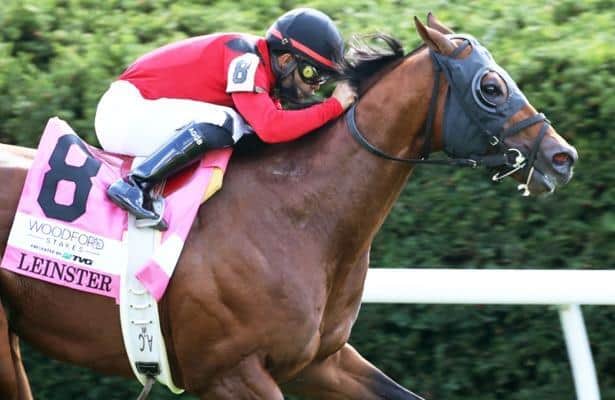 There are two important trends to keep in mind when analyzing the Breeders' Cup Turf Sprint. First off, Europeans have not fared well in this race and have never won this event. Secondly, fillies and mares have thrived in this event. They have notched three wins, including Belvoir Bay last year.

Despite the Europeans lack of success, star sprinter Battaash was primed to be go off as a heavy favorite in this spot. His withdrawal from consideration last week has left this race wide open. To get a better grasp on the top contenders, we compare the top Beyer, Brisnet and Timeform figures for North American based runners below.

Who is the fastest: Leinster and Imprimis are neck and neck in terms of speed figures and they will be in the wagering as well. Imprimis and Leinster's career high Beyer Speed Figures of 110 and 109 respectively stand out from the rest of the field and their numbers from their recent wins prove they are still in strong form. Brisnet and Timeform give Imprimis the edge and also value the races that Diamond Oops comes out of.

One thing that stands out: The three different figures have widely differing views of America's top fillies and mares in this race. The Beyer Speed Figures are not kind to Kimari, who only has a career best of 89. Brisnet is not crazy about Oleksandra's chances as her 99 career high puts her a full 5 points behind Kimari and Got Stormy. Timeform loved the form that Got Stormy was in last year as she earned a field best 127 number, but the 114 number she earned last out shows she may not be quite as good as she was, despite winning her last two.

Odds and accomplishments for the 2020 Turf Sprint runners:

• Peter Miller, who has won three Breeders' Cup Turf Sprints in a row, confirmed to HRN that he will run Texas Wedge and Bulletproof One in this year's race.

• Oleksandra went over three months without a workout following her win in the Jaipur Stakes (G1) at Belmont Park, but appears back on track for the Turf Sprint with five works this month.

• Following Diamond Oops' win in the Phoenix (G2), trainer Patrick Biancone said he would "flip a coin" to determine if he would run his dual surface stakes winner in the Sprint or Turf Sprint.

• Prix de l'Abbaye (G1) winner Wooded is unlikely to make the trip to America for the Turf Sprint, but runner up Glass Slippers is being considered according to trainer Kevin Ryan.

• John Sadler told HRN that Chaos Theory will remained stabled at Keeneland until the Breeders' Cup following his fourth-place finish in the Woodford (G2) and he is possible to run.

• Wesley Ward's Bound for Nowhere has not worked since Sep. 19 and will not be running in the Turf Sprint.

• Chad Brown confirmed that Front Run the Fed would be among his 13 Breeders' Cup entires.

Early Voting and Jose Ortiz get it done in the 147th Preakness
The decision to skip the Kentucky Derby with Early...