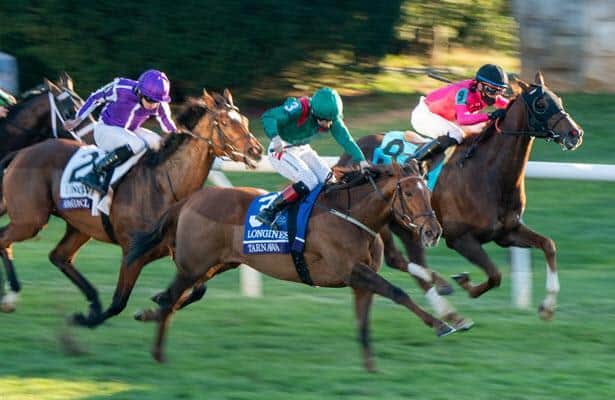 In last year's Breeders' Cup Turf at Keeneland, the Aga Khan's Tarnawa became the fifth European invader in the last six years to win the race when scoring by a length at odds of 9-2 for trainer Dermot Weld. On Nov. 6 at Del Mar, the 5-year-old mare by Shamardal will look to defend her title.

Tarnawa is listed as the 2-1 favorite in overseas markets for the $4 million Turf, which is shaping up to have a full gate for the 1 1/2-mile journey.

Tarnawa is followed by European-based Mishriff (4-1) for trainer John Gosden. The Ireland-bred, a 4-year-old colt by Make Believe, has had a lucrative campaign, to say the least.

Mishriff has racked up $14,120,049 in earnings this season for Prince A.A. Faisal, with wins that include the world's richest dirt race, the Saudi Cup (G1), and the lucrative Dubai Sheema Classic (G1) on turf before adding the Juddmonte International (G1) at York by a robust six lengths in August.

Over the weekend, Mishriff disappointed as the favorite when fourth in the Champion Stakes (G1) at Ascot on British Champion's Day.

Ted Voute, racing manager for Prince Faisal, told U.K-based Racingtv.com Tuesday the effort was "slightly disappointing," while also noting the going was not to his liking after recent rain.

Voute also did not rule out the possibility of instead trying the $6 million Breeders' Cup Classic going 1 1/4 miles on dirt with Mishriff.

"It's up to the Prince and John really, and down to Mishriff and his well-being," Voute told Racingtv.com.

The top domestic choice in futures market is the 4-year-old gelding Domestic Spending (9-2), who is one of three horses likely for trainer Chad Brown.

In addition to Domestic Spending, the four-time Eclipse Award-winning trainer also is circling the race with front-running Grade 1 winner Tribhuvan and Rockemperor, who exits a win in the Turf Classic (G1) at Belmont Park on Oct. 9.

Defending winner Tarnawa is not the only female horse well-regarded in overseas futures market for the Turf. Love, a 4-year-old filly trained by Aidan O'Brien, is the current fourth choice at 8-1.

By Galileo, Love is a five-time Group 1 winner in Ireland and England. In four starts this year, she won the Prince of Wales's (G1) at Royal Ascot and hit the board in two other Group 1 events. Most recently, she was second by a head in the Sept. 12 Blandford Stakes (G2) at the Curragh.

Love was slated to run in the Prix de l'Arc de Triomphe (G1) at ParisLongchamp on Oct. 3 but had to be withdrawn after spiking a fever.

Europe-based trainer Charlie Appleby, who has three Breeders' Cup wins, is in the midst of a monster season conditioning horses for Godolphin. He is considering both Yibir (10-1) and Walton Street (14-1). Yibir, by Dubawi, won last month's Jockey Club Derby Invitational at Belmont Park in his U.S. bow. Walton Street shipped to Woodbine from Europe and promptly took the Canadian International (G1) on Sept. 18.

Other leading U.S.-based contenders include 4-year-old Gufo for trainer Christophe Clement and a pair of Southern California-based rivals in United and Astronaut.

Gufo, a 4-year-old colt by Declaration of War, won the Sword Dancer (G1) in August and was third behind Rockemperor in the Turf Classic most recently.

Astronaut, a 4-year-old by Quality Road, has gone from a maiden to a Grade 2 winner in six starts this year. Trained by John Shirreffs, he was second in the San Juan Capistrano (G3) at Santa Anita before breaking through to win the Aug. 21 Del Mar Handicap (G2) at 24-1.

United would be taking a third crack at the Turf for Hall of Fame trainer Richard Mandella. The 6-year-old gelding by Giant's Causeway was beaten a head by Bricks and Mortar as a 51-1 long shot at Santa Anita in 2019, then last year was disappointing eighth at Keeneland.

Pre-entries for the Turf and all other Breeders' Cup races will be taken on Monday.