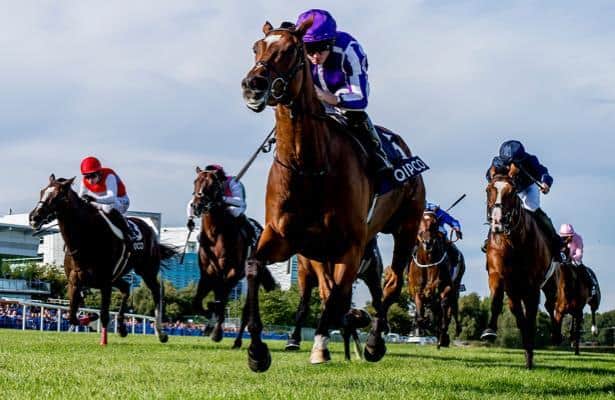 The 1 1/2-mile, $4 million Breeders’ Cup Turf at Keeneland drew a field of 10 headed by the 5-2 morning line favorite Magical. The top ranked Americans are Arklow and Channel Maker who were both assigned 5-1 odds.

The field for the Turf includes four fillies or mares, one 3-year-old, four millionaires, six Europeans and seven Grade/Group 1 winners.

Here is a full field analysis for the Breeders’ Cup Turf on Nov. 7 at 4:33 p.m. ET at Keeneland. The race is the second-to-last leg of the Pick 6, the late Pick 5 and the Pick 4. The morning-line odds were provided by the Breeders’ Cup.

1) Arklow – [ML 5-1 – Arch – Brad Cox/Florent Geroux – 29: 7-7-2 - $2,466,116] – This Brad Cox runner became a contender for what will be his third try in the BC Turf after he won the Kentucky Turf Cup (G3) in his most recent start in September at Kentucky Downs. He beat a field of 10 that included Red Knight who came back to win a stake at Keeneland and Zulu Alpha. In his two prior tries in the Turf he was eighth in 2019 and fourth in 2018 behind Enable and Magical. He is training well for the always dangerous Cox, but this field is loaded with European talent. Toss

2) Magical (IRE) – [ML 5-2* – Galileo (IRE) – Aidan O’Brien/Ryan Moore – 26: 12-7-1 - $5,314,821] – What a career this 5-year-old mare has put together while racing primarily against males. She won the Irish Champion Stakes (G1) in September at Leopardstown, which was a Breeders’ Cup Challenge race. In her only previous start in America she was second in the 2018 Breeders' Cup Turf behind the retired champion Enable after having the lead. Most recently she was third in October at Ascot in the British Champion Stakes (G1) after a less than ideal trip, beaten by two of the best European runners. Unlike many others who are deep closers, Magical likes to be stalking the early pace which will give her first run at the them. Top Choice

3) Tarnawa (IRE)– [ML 6-1 – Shamardal – Dermot Weld/Christophe Soumillon - 13: 7-2-2 - $788,503] – This 4-year-old filly comes to Keeneland with three wins in a row. She won two Group 1 races at Longchamp in France and before that it was a Group 3 at Cork in Ireland. This will be her first start against the boys. Legendary trainer Dermot Weld has not done well in the Breeders’ Cup; he is winless in 16 tries with only a third-place finish to his credit. Weld has not had a starter in the championships since 2014. Current form certainly makes her a serious contender, but the trainer’s Breeders’ Cup record is a bit off-putting. Win contender

5) Donjah (GER) – [ML 30-1 – Teofilo (IRE) – Henk Grewe/Clement Lecoeuvre – 10: 4-1-1 - $340,880] – This 4-year-old filly raced against males in her last seven races in Germany including an August victory in the Preis von Europa (G1) at Cologne on a yielding turf course. She actually never raced on a firm turf course. This will be Grewe’s first starter in the Breeders’ Cup. Toss

7) United – [ML 8-1 – Giant’s Causeway – Richard Mandella/Flavien Prat – 16: 7-4-1 - $1,413,549] – Since falling a head behind a long-shot upset of Horse of the Year Bricks and Mortar in last year’s Breeders' Cup Turf, United ran no worse than second in all five of his 2020 starts. He has four Grade 2 wins this year in which he showed versatility by winning on the lead, pressing the pace or stalking. Mandella has had tremendous success in the Breeders’ Cup, and he excels at getting a horse ready for a big race. United showed last year that on his best effort he can make some noise in this race. Use underneath

8) Red King - [ML 20-1 – English Channel – Phil D’Amato/Umberto Rispoli – 28: 7-4-7 - $398,115] – Red King won the Del Mar Handicap (G2) in August ahead of United, who was a long-shot second in the Breeders' Cup Turf last year. That race at Del Mar was a Breeders’ Cup Challenge race that earned him a career-high speed figure and a spot in the Turf. That was his third consecutive victory following the San Juan Capistrano (G3) and an allowance at Santa Anita. He has not raced since August, and D’Amato sent him to Keeneland at the beginning of October when he recorded five breezes on the turf. Use underneath

9) Channel Maker – [ML 5-1 – English Channel – Bill Mott/Manny Franco – 36: 7-5-4 - $2,631,551] – This 6-year-old gelding is in the finest form of his 36-race career having won two races in a row for the first time. They were both Grade 1 races in New York and at the 12-furlong distance of this race. In two frontrunning efforts he took the Turf Classic at Belmont Park and the Sword Dancer at Saratoga, a Breeders’ Cup Challenge race. This will be his third appearance in the Breeders' Turf and fourth in the championships overall. He was 12th in the Turf last year, 11th in 2018 and seventh in the 2016 Juvenile Turf. This field is lacking horses that prefer to be on the lead, so there is little doubt that regular rider Franco will be out front hoping hold off the late move of some formidable closers. Use underneath

10) Mogul (BG) – [ML 4-1 – Galileo (IRE) – Aidan O’Brien/Pierre-Charles Boudot – 9: 4-1-1 - $452,679] – This 3-year-old is in fine form for O’Brien after a win in the Grand Prix de Paris (G1) in September. Three races back he won a Group 3 at Goodwood. One of those wins was on firm turf with the other on a good grass course. He will have to face older horses for the first time. Nine 3-year-olds won the Turf since its inception as one of the original Breeders' Cup races. O’Brien will be looking for his 13th overall Breeders’ Cup victory and his sixth in the Turf. Win contender

Summary: In America the pace matters, even in 12-furlong races, as opposed to Europe, where the early going seems to be more of a preliminary stage until the real running begins in the final part of the race.

Channel Maker and United have both had success racing on the lead and will try and win the Turf on the front end. That means the late runners, especially the Europeans ,will have to make sure that they do not get too far behind in the early going.

Among the Europeans, Magical, Lord North, Mogul, and Tarnawa have shown the ability to stay closer to the early pace, and that makes them serious contenders.

In the end, Magical might just have too much class for the rest of this field, is likely to get first run on the early leaders and will be very hard to beat nearing the finish. It is difficult to completely eliminate many of the horses as contenders for the underneath positions in the exacta, trifecta, and superfecta.