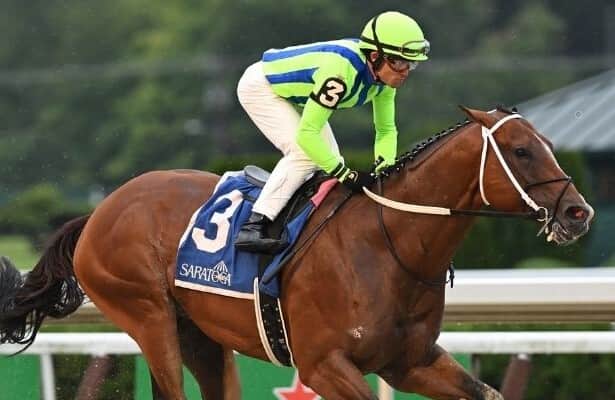 Two years after winning his first Breeders' Cup Sprint with Mitole, trainer Steve Asmussen looks to have a massive shot at adding a second to his Hall of Fame resume with projected heavy favorite Jackie's Warrior at Del Mar on Nov. 6.

Jackie's Warrior, who leads a trio of 3-year-olds atop the overseas futures market for the Sprint, has been the top one-turn horse of his generation for the last two seasons.

In eight career starts at a mile or less, Jackie's Warrior has been bested only once. The lone blemish came in June in the seven-furlong Woody Stephens (G1) at Belmont Park. He was pinched back to last at the start under Joel Rosario, shot forward on the inside to seize the lead entering the turn and motored to deep stretch before finally succumbing to Drain the Clock by a neck on the wire.

Two months later, Jackie's Warrior would return to trounce Drain the Clock by 7 1/4 lengths in the Amsterdam Stakes (G2) at Saratoga. He since has added wins in the H. Allen Jerkens Memorial (G1) and the Gallant Bob on Sept. 25.

Jackie's Warrior will face older for the first time in the Breeders' Cup Sprint. The other sophomores most fancied by futures markets are Following Sea for Hall of Fame trainer Todd Pletcher and Southern California-based Dr. Schivel, who both are best-priced at 6-1.

Following Sea, who beat older in the Oct. 9 Vosburgh (G2) at Belmont Park, has not been confirmed to contest the Sprint. The Runhappy colt could bypass the Breeders' Cup and await races in December, such as the Cigar Mile (G1) or Malibu (G1), Pletcher has indicated.

Dr. Schivel emerged at the head of the class of California sprinters after beating older in both the Bing Crosby (G1) at Del Mar and Santa Anita Sprint Championship (G2) most recently. The son of Violence enters the Sprint with a sparkling record of 7: 5-1-1 for trainer Mark Glatt.

Among those Dr. Schivel has surpassed this year on the West Coast are a pair of veteran Grade 1 winners targeting the race, C Z Rocket and Flagstaff.

C Z Rocket, who was second to Whitmore in last year's Sprint at Keeneland, was beaten about a half length by Dr. Schivel in the Bing Crosby, then was handled easily by Dr. Schivel when a no-threat third in the Santa Anita Sprint Championship most recently.

Flagstaff won the Churchill Downs Stakes (G1) earlier this year but most recently has been limited to a minor award in the Pat O'Brien (G1) and runner-up to Dr. Schivel in the Santa Anita Sprint Championship for trainer John Sadler.

Pre-entries for the Sprint and all other Breeders' Cup races will be taken Oct. 25.