Breeders' Cup Sprint 2020: Who are the fastest contenders? 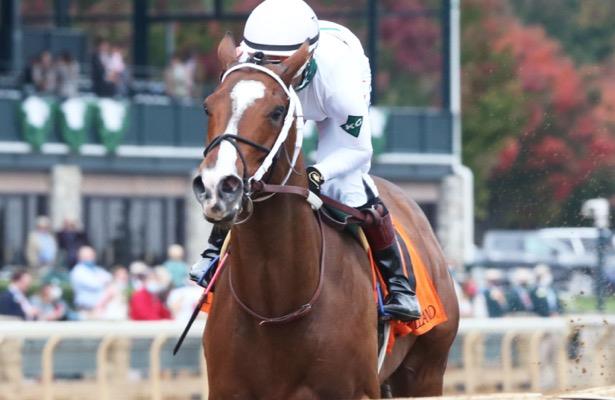 If Vekoma lands in the Breeders’ Cup Sprint, handicappers will be faced with an interesting decision to make.

Do they lean on the class and proven form of Vekoma? Or do they try to upset the favorite with recency and upside from the likes of Yaupon, Frank's Rockette and Nashville?

To help get a better gauge on some of the fastest horses in the country, we take a look at the speed figures for this year's Sprint contenders below.

Who is the fastest: It comes as no surprise that Vekoma is the fastest horse in the field based off of his back-to-back Grade 1 wins. For those looking for a price, Chief Cicatriz has both back and recent numbers right near the top of the field. He seems a bit outclassed, but number-wise, he figures for a piece. Diamond Oops, C Z Rocket and Frank's Rockette, who bring as good of form as anyone into this race, are surprisingly light on speed figures across the board.

One thing that stands out: Nashville, while making only his second career start, earned the highest Timeform figure in the field and a Brisnet figure that was only one point less than Vekoma's Met Mile win. He earned a Beyer Speed Figure four points higher than C Z Rocket and Diamond Oops' wins in key Breeders' Cup preps without even being asked. It is hard to imagine a horse making only his third career start winning the Sprint, but the scary thing is that Nashville does not have to improve very much to do so.

Odds and accomplishments for the 2020 Sprint runners:

• Lasting Legacy, who was recently claimed for $80,000, has been confirmed as a Sprint starter.

• Following Diamond Oops' win in the Phoenix (G2), trainer Patrick Biancone said he would "flip a coin" to determine whether he would run his dual-surface stakes winner in the Sprint or Turf Sprint.

• John Sadler confirmed to HRN that Flagstaff will be headed to the Breeders' Cup Sprint.

• Peter Miller confirmed to HRN that C Z Rocket will run in the Sprint.

• Chad Brown stated that Complexity would be pointed toward the Dirt Mile after his Kelso (G2) victory.

• Jack Sisterson did not list Lexitonian among his other Breeders' Cup starters, Vexatious and True Timber.

• Landeskog, who disappointed at Pimlico, was not listed among Brad Cox's Breeders' Cup probables.