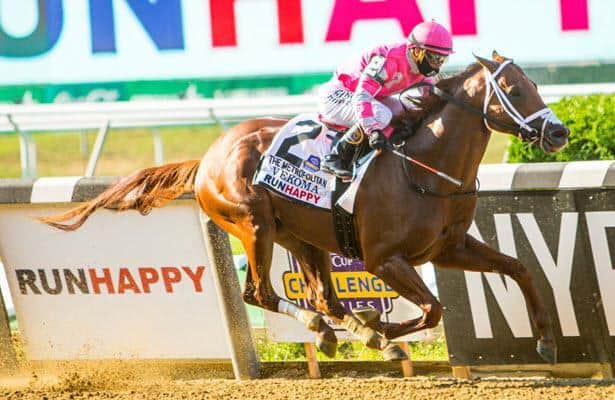 The six-furlong, $2 million 2020 Breeders’ Cup Sprint is likely to have a full field of 14 for the first time in several years. The Sprint shapes up as a matchup between the speedy 3-year-olds Yaupon and Nashville with the older males who are led by division leader Vekoma.

The main body of the field includes five 3-year-old males, one 3-year-old filly, and eight older males. Historically, nine 3-year-olds have won the Sprint with the two most recent being Runhappy in 2015 at Keeneland followed by Drefong in 2016.

Here is a full field analysis for the Breeders’ Cup Sprint, which will be race 8 on Nov. 7. The Sprint is part of the Pick 6 and the third Pick 4 and starts the late Pick 5. Horses are listed alphabetically with the morning line odds from Horse Racing Nation based on pre-entries. The post-position draw is scheduled for Monday at 5 p.m. EST.

Collusion Illusion – [ML 12-1 – Twirling Candy – M. Glatt/F. Prat – 7: 5-0-1 - $422,751] – For the first time, this 3-year-old will leave California, where he was the winner of five out of seven career starts. With a stalking running style, Collusion Illusion won the restricted Laz Barrera (G3) and the Bing Crosby (G1) at Del Mar against older horses. In his most recent start, he was third behind C Z Rocket. He will come with higher odds than in his last three starts in this field of 14. Use underneath

Diamond Oops – [ML 6-1 – Lookin At Lucky – P. Biancone/F. Geroux – 16: 7-3-1 - $1,058,590] – This 5-year-old gelding won his last two races, both Grade 2 stakes, including the Phoenix at Keeneland and the Turf Sprint at Churchill. Trainer Patrick Biancone has never won a Breeders’ Cup race in 23 attempts. Diamond Oops is another sprinter who prefers to race from a stalking position. On his best he has to be considered a contender. Use underneath

Echo Town – [ML 20-1 – Speightstown – S. Asmussen/R. Santana Jr. – 9: 4-2-2 - $410,020] – Trainer Steve Asmussen won his first BC Sprint last year with the champion Mitole. Echo Town’s sire Speightstown won the Sprint back in 2004. This 3-year-old most recently ran third behind Diamond Oops in his first try against older horses. He was the winner of the H. Allen Jerkens Stakes (G1) at Saratoga going seven furlongs. He has hit the board in eight out of nine starts, only missing when he stretched out to a mile in a Grade 2. In this deep field, he will probably carry the longest odds of his career and appears to be a notch below some of the others. Toss

Empire of Gold – [ML 30-1 – Goldencents – T. Eoff/D. Carroll – 14: 4-4-3 - $159,373] – Empire of Gold finished second in the Phoenix (G2) at Keeneland behind Diamond Oops after having the lead in the stretch at odds of 51-1. Prior to that big performance, he was an allowance winner at Remington Park and Lone Star. He set some very fast early fractions in the Phoenix. Typically, horses don’t repeat long-shot efforts like that, especially in a large field of 14. Toss

Firenze Fire – [ML 10-1 – Poseidon’s Warrior – K. Breen/J. Lezcano – 29: 12-3-2 - $2,038,250] – Firenze Fire will make his fourth appearance in the Breeders’ Cup. Last year he was fifth in the Sprint. In 2018, he was fourth in the Dirt Mile and as a 2-year-old he finished seventh in the Juvenile. The Kelly Breen runner has a pair of Grade 2 victories at Belmont Park this year. Half of his career wins were at the six-furlong distance of the Sprint. He does his best running while pressing the pace. Use underneath

Frank’s Rockette - [ML 15-1 – Into Mischief – B. Mott/J. Alvarado – 10: 6-4-0 - $606,103] – Trainer Bill Mott has opted to run this 3-year-old filly in the Sprint because the Filly and Mare Sprint is seven furlongs and against the boys she can race six furlongs. She is currently on a four-race winning streak that began in a Churchill Downs allowance and moved to three graded stakes in New York. Most recently she beat older fillies and mares at Belmont in the Gallant Bloom (G2) by more than seven lengths while pressing the pace. She is fast but probably not fast enough for some of these. Toss

Manny Wah - [ML 50-1 – Will Take Charge – W. Catalano/C. Lanerie – 20: 3-5-6 - $354,88] – Manny Wah returned from a three month layoff to miss an allowance win by a nose at Keeneland behind Sprint also-eligible Bon Raison. The son of Will Take Charge hit the board in several stakes races while sprinting and made a brief appearance on the 2019 Kentucky Derby trail when he was third behind War of Will in the LeComte (G3). Toss

Nashville - [ML 8-1 – Speightstown – S. Asmussen/R. Santana Jr. – 2: 2-0-0 - $82,200] – This speedy 3-year-old just began his racing career in September when he won a Saratoga maiden special weight by more than 11 lengths, leading every step of the way on a sloppy track, going 1:14-2 for 6 1/2 furlongs. The word was out on that day as he was sent off at odds of 3-10. The $460,000 yearling purchase purchase came back after a month to win an allowance at Keeneland by almost 10 lengths which earned a 101 Beyer Speed Figure and the chart said that he “romped with ease.” He has to be respected off those two dazzling victories. Win contender

Vekoma - [ML 5-2 – Candy Ride – G. Weaver/J. Castellano – 8: 6-0-1 - $1,245,525] – Vekoma has been on top of the Male Sprint division with his unbeaten record in 2020 which includes Grade 1 scores in the Carter and the Metropolitan Mile. Trainer George Weaver made the Sprint his first preference for the son of Candy Ride over the Dirt Mile. He has been off since the Met Mile in July, but began his campaign this year after a 10 month break. He earned triple-digit BSFs in all three of his wins this year. As a 3-year-old, Vekoma won the Blue Grass (G2) at Keeneland. He is versatile and can race from off the pace or on the lead. Expect him to stalk what could be a blistering pace. Top Choice

Whitmore - [ML 20-1 – Pleasantly Perfect – R. Moquett/J. Talamo – 37: 14-11-3 - $3,207,8500] – Whitmore will make his fourth consecutive appearance in the BC Sprint with a third, second, and eighth in his previous appearances. Each year he has prepared by running in the Pheonix at Keeneland. This year, as a 7-year-old, he finished fourth in that prep race. He has the most career victories in the field with 14. He won twice at Oaklawn Park this spring and six furlongs is his best distance. There will be plenty of early speed for his closing move and in this field and his odds will be much higher than usual. Use underneath

Yaupon - [ML 7-2 – Uncle Mo – S. Asmussen/J. Velazquez – 4: 4-0-0 - $288,264] – Here is the other speedy front runner for Steve Asmussen. Yaupon did not debut until June, when he broke his maiden at Churchill Downs by a nose at odds of 9-2. He moved to Saratoga to win an allowance by almost four lengths and then the Amsterdam (G2) on a muddy track by two lengths, getting 101 and 100 BSFs for those wins. Yaupon stayed unbeaten when he won the Chick Lang (G3) on the Preakness undercard by four lengths. Win contender

Bon Raison – AE1 [ML 50-1 – Raison d’Etat – J. Sisterson/A. Beschizza – 43: 11-4-7 - $654,534] – The 5-year-old horse is currently first on the Also Eligible list and will need a defection from the main field to get a space in the starting gate. Maybe it was the allowance victory at Keeneland just a few weeks ago that prompted Calumet Farm to give him a shot in the Breeders’ Cup. Amongst his 11 career victories is one stakes win in the Peeping Tom at Aqueduct in March of 2019. Toss

Lasting Legacy – AE2 [ML 50-1 – Tapizar – R. Hess Jr./G. Saez – 13: 5-3-0 - $259,460] – Lasting Legacy is currently outside of the main field being second on the Also Eligible list. He was claimed for $80,000 from his most recent start when he was fourth behind Hog Creek Hustle in a Keeneland allowance. He ran second in the Mr. Prospector (G3) at Gulfstream Park in December when Jason Servis was his trainer. Toss

Summary: With a full field of 14 expected in the Breeders’ Cup Sprint, plenty of horses will go to post with odds higher than usual. That means bettors will have the opportunity to fill out the trifecta and superfecta with some talented horses offering attractive prices.

The post position draw may be a factor for this large field. Far outside or inside draws could compromise the chances of a horse in this six furlong sprint.

There should be a brisk pace in the Sprint with a few very fast and talented horses who do their best running on the lead. With the 3-year-olds Frank’s Rockette, Nashville, and Yaupon expected to head to the front, the race should set-up for the late runners. I expect Vekoma to get an ideal stalking trip and a victory in the Sprint.

Shedaresthedevil runs to dominant win in G1 Hirsch
She did not have to deal with Letruska on Sunday....

See the stats that prove Essential Quality’s grit in Jim Dandy
He won by only a half-length. But that does not te...