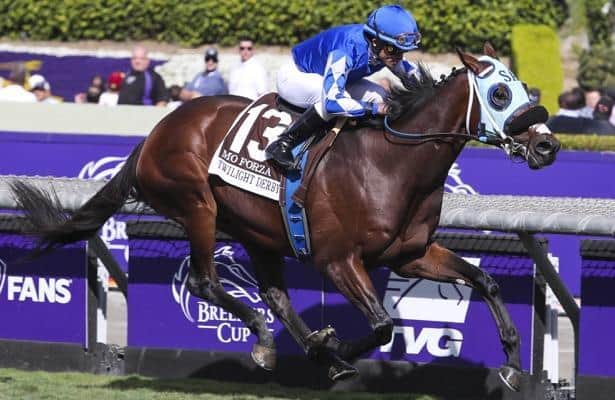 The Breeders' Cup Mile is annually among the most competitive races of the now 14-race "World Championships" and this year's edition, set for Nov. 6 at Del Mar, is shaping up to be no different.

In overseas futures markets, Godolphin's European-based Group 1 winner Space Blues is the 5-2 favorite followed by Southern California-based Mo Forza at 4-1. Their projected competition includes no fewer than six U.S.-based horses with at least one Grade 1 win this year, plus 2020 Breeders' Cup Mile winner Order of Australia among others.

U.S.-based runners enter having won seven of the last 10 Breeders' Cup Mile's with the most recent being Uni in 2019 for trainer Chad Brown.

Mo Forza was on track to be one of the favorites in last year's Mile following wins in the De Mar Mile (G2) and City of Hope (G2) for trainer Peter Miler, but an injury in the lead-up to the race forced him to the sidelines. The 5-year-old horse by Uncle Mo was off more than 10 months before resurfacing for this year's Del Mar Mile and promptly vanquishing both Smooth Like Strait and Hit the Road, who are on target for the Breeders' Cup Mile. Six weeks later, Mo Forza would beat those rivals again when adding a second City of Hope victory.

Brown is targeting the Mile with a pair of Grade 1 winners in Blowout and Raging Bull. Blowout, the 8-1 third choice in the futures market, exits a front-running victory in the Oct. 9 First Lady (G1) at Keeneland. Earlier this year, the 6-year-old mare by Dansili won the Distaff Turf Mile (G2) at Churchill Downs.

Raging Bull, 10th in last year's Breeders' Cup Mile, won the Maker's Mark Mile (G1) at Keeneland this past spring. However, in his two most recent starts he failed to menace when sixth in the Fourstardave (G1) and a no-threat third in last month's Woodbine Mile (G1).

Trainer Paulo Lobo also has a pair targeting the Mile in the streaking In Love and Ivar, who was fourth in last year's Mile at Keeneland. In Love has won three straight, including the Keeneland Turf Mile (G1) most recently. Ivar has just two starts this season, an off-the-board finish in the 1 1/8-miles Turf Classic (G1) in the spring and fourth in the Oct. 9 Keeneland Turf Mile (G1).

As for Order of Australia, he sprung a 73-1 upset when winning last year's Mile for trainer Aidan O'Brien. The 4-year-old colt by Australia had one win in five starts this year in Europe before coming over for the Keeneland Turf Mile and finishing dead-last in a field of 12.

Then there is Got Stormy, who will likely be making her final start in a distinguished career for trainer Mark Casse. Got Stormy was second in the 2019 Breeders' Cup Mile at Santa Anita and last year contested the shorter Turf Sprint where she checked in fifth. Headed back to the Mile this year, the 6-year-old mare by Get Stormy will enter with two wins in five starts this campaign including the one-mile Fourstardave (G1) at Saratoga.

Pre-entries for the Mile and all other Breeders' Cup races will be accepted through Monday.