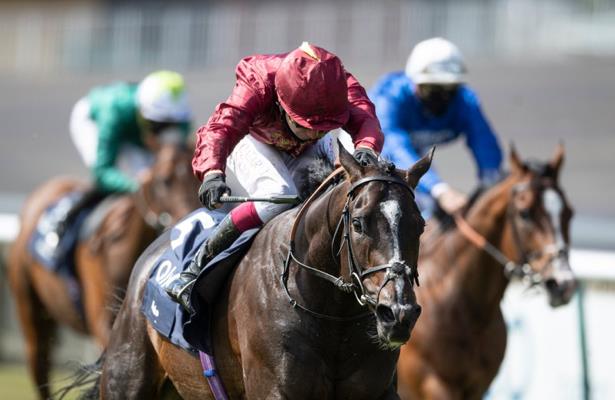 Bettors are usually pretty safe betting either Chad Brown or a European in a U.S. turf race.

Considering that Brown is likely to run four horses in the Breeders' Cup Mile and as many as six Europeans could ship for the race, it is highly likely that the winner will come from one of those groups in this Grade 1 affair.

The complexion of the Mile changed last week when early favorite Pinatubo was retired. With the colt that most considered the best miler in the world out of the race, the Mile now looks wide-open.

Kameko has emerged as the leading European contender and tepid favorite for the Mile. The two-time Group 1 winner recently defeated the talented Benbatl in the Joel Stakes (G2) in September and bypassed an expected start in the Queen Elizabeth II at Ascot to focus on the Breeders' Cup.

Potentially joining Kameko could be the remarkable mare One Master. She has been better than ever as a six-year-old, winning the Prix de la Foret (G1) for a third time on Oct. 4th. She ran 3rd in Saturday's British Champions Sprint and could still jump on the plane to America for her third Group or Grade 1 race in a month.

Aidan O'Brien's Circus Maximus, who was 4th as one of the favorites in last year's Mile, could make a return trip this year. The three-time Group 1 winner ran a disappointing 10th in Saturday's Queen Elizabeth II Stakes at Ascot.

Leading Chad Brown's quartet is defending Mile champion Uni. She rounded back into her best form with a win in Keeneland's First Lady (G1), though she has yet to produce the same speed figures she did heading into last year's race.

Digital Age has produced a move forward as a four-year-old as each of his starts has been better than the previous in 2020. He won the Turf Classic (G1) on the Kentucky Derby undercard and may enjoy cutting back to a distance that he is a perfect two-for-two at.

Raging Bull and Without Parole are top milers in their own right, but often settle for minor placings.

Mo Forza and Halladay are the leading U.S. contenders not trained by Chad Brown. Peter Miller's Mo Forza has dominated his California competition, winning 6 out of his last 7 races. He has won his last four starts at one mile and is improving with every start.

Todd Pletcher's Halladay has won three out of his last four races, including a victory in the Fourstardave (G1).

The Mile lost its' superstar when Pinatubo retired, but it will be one of the most competitive, deep and fun races of the weekend.

• Connections of three-time Group 1 Prix de la Foret winner One Master have decided to run her Champions Sprint at Ascot on Oct. 17, but have not ruled out the Breeders' Cup Mile.

• Chad Brown has confirmed that Digital Age will target the Breeders' Cup Mile, not the Turf.

• Brad Cox has confirmed that Factor This will target the Mile rather than the Turf.

• Chad Brown stated that Newspaperofrecord could race as a 5-year-old, but the Matriarch at Del Mar, not the Breeders' Cup, would be her next target.

• Brad Cox said Beau Recall is under consideration for the Breeders' Cup and would face the boys in the Mile if she went.

• Fourstardave winner Halladay was scratched from the Shadwell Mile with a hind leg infection, but trainer Todd Pletcher is hopeful he can still make the Breeders' Cup Mile.