BC Juvenile Fillies 2020: Who are the fastest contenders? 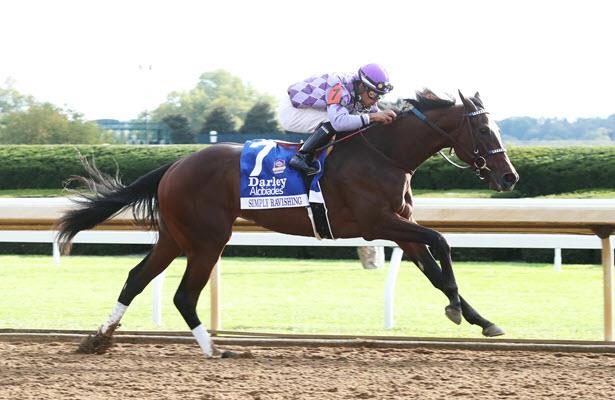 The Juvenile Fillies is shaping up as one of the most competitive races of the entire Breeders' Cup, led by four Grade 1 prep winners: Princess Noor, Simply Ravishing, Dayoutoftheoffice and Vequist.

Including the undefeated Girl Daddy and Souper Sensational, there are six fillies with strong credentials who could win this race. With little separating the cream of the crop, we take a look at Beyer, Brisnet and Timeform Speed figure to help sort out this affair.

Who is the fastest: Dayoutoftheoffice has the highest Beyer Speed Figure and best Timeform number. Simply Ravishing and Vequist are right on her heels in both categories, making all three prime contenders based on speed figures. Longshot Princess Secret is a surprising favorite of Brisnet's figures as the 100 she earned two starts back is the highest in the field.

One thing that stands out: Princess Noor has been heavily touted throughout her career, has been visually impressive in all three wins and is trained by Bob Baffert. Those are all recipes for favoritism, but speed figure players will look elsewhere. Her Brisnet Speed Figures put her in the mix, but her Beyer Speed Figures and Timeform Figures leave her with a lot of work to do.

• Mark Casse told HRN on Tuesday that Souper Sensational is under consideration for the Juvenile Fillies following her impressive win in Woodbine's Glorious Song Stakes.

• Travel Column, third in the Alcibiades, was not listed by trainer Brad Cox among his Breeders' Cup probables.

• Trainer Daniel Pita had this to say when asked about the Breeders' Cup by Gulfstream Park's publicity team following Princess Secret's win in the My Dear Girl Stakes: "She probably deserves a rest. She’ll tell us if she can give us another effort and, believe me, Keeneland’s in the back of my mind a little bit."