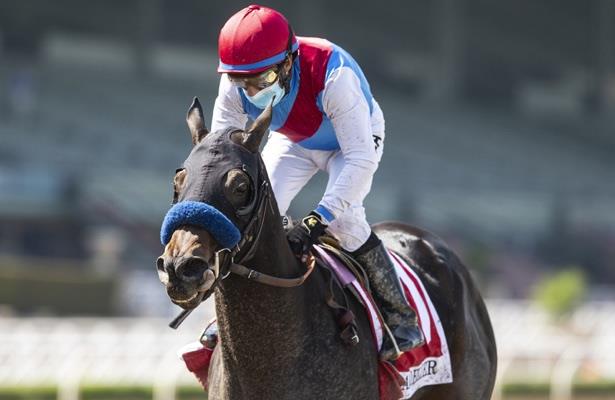 Coming off her dominating win in Saturday's Grade 2 Chandelier Stakes, Princess Noor is the heavy favorite for the Breeders' Cup Juvenile Fillies, at 3-2 in international futures.

Trained by Bob Baffert, the daughter of Not This Time broke her maiden on debut at Del Mar in August and then won the Del Mar Debutante Stakes (G1) on her way to a perfect 3-for-3 record.

Only three other horses are at 10-1 or shorter.

Girl Daddy, at 7-1, is the early second choice. The Uncle Mo filly, trained by Dale Romans, broke her maiden at Ellis Park on first try in July, then won the Pocahontas Stakes (G3) at Churchill Downs on Sept. 3.

The early third choice is Thoughtfully, at 15-2. The Steve Asmussen-trained daughter of Tapit broke her maiden on first try at Churchill Downs in June and won the Adirondack Stakes (G2) at Saratoga on Aug. 12.

And Vequist, at 10-1, is the only of the top four choices to have lost a race. The daughter of Nyquist came in second in her debut at Parx in July, then scored in the Spinaway Stakes (G1) at Saratoga next out on Sept. 6 for trainer Robert Reid Jr.

Below are the best prices in early odds that have been released on the Juvenile Fillies by international bookmakers.