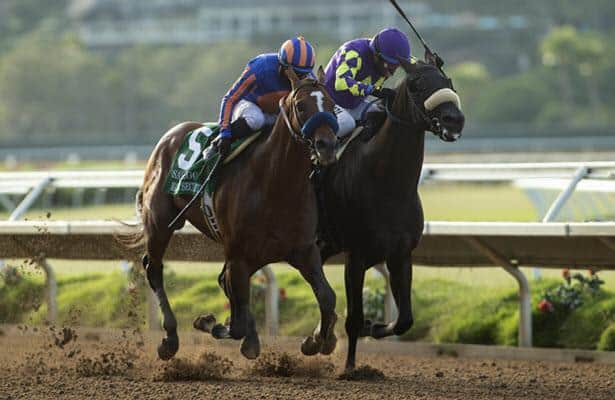 Defending race winner Battaash returns in 2020 to headline the Nunthorpe Stakes (G1), part of the prestigious York Ebor Festival. The 6-year-old Battaash is 2-for-2 this season, most recently winning the King George Stakes (G2) on July 31 at Goodwood.

U.S. trainer Wesley Ward was considering the Nunthorpe for Golden Pal, who competed at Royal Ascot. The juvenile will instead run Friday at Saratoga in the Skidmore Stakes.

Uni’s Breeders’ Cup Mile triumph last fall was the victory that earned her the Eclipse Award 2019 Champion Turf Female. She can sew up a fees-paid berth for the 2020 Championships on Saturday in the $400,000 Fourstardave (G1).

Reigning race winner Got Stormy doesn’t yet have a win to show this season from four starts. Raging Bull became a Grade 1 hero in May when taking Santa Anita’s Shoemaker Mile.

Richard Mandella trains United, who’s 3-for-3 as a 5-year-old. He nearly upset last year’s Breeders’ Cup Turf, running second to Horse of the Year Bricks and Mortar at 52-1 odds.

Combatant will attempt to win graded stakes on both dirt and turf in the same season. He took the Santa Anita Handicap (G1) back in March but has run 10th and fifth in his two starts since.

All eyes turn to Maximum Security as he makes his second start for trainer Bob Baffert in the $500,000 Pacific Classic (G1).

Maximum Security’s first race for Baffert was a narrow victory last month in the local San Diego Handicap (G2) over Midcourt, who he’ll meet again in the Pacific Classic. The 4-year-old has won five straight starts and looks to stamp his Breeders’ Cup ticket after bypassing the 2019 Championships.

Higher Power enters the 2020 Pacific Classic as the race’s reigning champion. He seeks to become the first two-time winner of this event since Richard’s Kid in 2009-10.

Nando Parrado upset Ascot’s Coventry Stakes (G2) in June as a 150-1 longshot. Per the BBC, the previous record for longest odds by a Royal Ascot winner was 100-1 (Fox Chapel, 1990 Britannia Stakes and Flashmans Papers, 2008 Windsor Castle).

Other contenders include 2020 Windsor Castle winner Tactical, who The Queen campaigns.

The Ken McPeek trainee sat patiently off leader Crystal Ball through the first six-plus furlongs of the 1¼-mile stakes. She moved into the lead through the far turn without any resistance from the pacesetter and opened up a 6½-length lead before coasting to the wire.

“She just keeps amazing us,” said McPeek, who bought Swiss Skydiver two years ago for a bargain $35,000. “Every race, it seems like there’s a little more there. She overcomes adversity and is just really special.”

Next up for the 3-year-old is the Kentucky Oaks on Sept. 4 at Churchill Downs.

3-year-old Palace Pier improved to 5-for-5 in his young career when crossing first Sunday under jockey Frankie Dettori.

Ghaiyyath on Wednesday made it three Group 1 wins this year in as many starts when cruising in the International Stakes.

The Godolphin runner Ghaiyyath entered off victories earlier this summer in Newmarket’s Coronation Cup (G1) and Sandown Park’s Coral-Eclipse (G1). He led throughout the International to come home three lengths ahead of runner-up Magical.

Authentic’s win in the Haskell (G1) made him the first runner from the barn of Baffert – a 15-time Breeders’ Cup winner – to clinch a berth in the 2020 Championships. The Kentucky-bred Into Mischief colt is 4-for-5 lifetime. He’s working at Del Mar toward the Sept. 5 Kentucky Derby and doesn’t appear in the Breeders’ Cup Classic Rankings.

Ghaiyyath made it 3-for-3 during his 5-year-old season when leading at every call of the International (G1). Enable, Magical and Stradivarius are among the rivals the Irish-bred son of Dubawi has defeated this season. Trainer Charlie Appleby said the Breeders’ Cup Turf would be Ghaiyyath’s most likely race if he traveled this fall to Keeneland.

Improbable shipped East from Baffert’s California base for the Whitney (G1) and proved best in a field of five millionaires. The Kentucky-bred son of City Zip has now posted back-to-back top-flight wins, also taking the Hollywood Gold Cup Stakes (G1) on June 6 at Santa Anita Park. Improbable, No. 4 in the Breeders’ Cup Classic Rankings, returned to the work tab Saturday at Del Mar.

A Kentucky-bred son of Frankel, 6-year-old Mozu Ascot is a two-time Group 1 winner in Japan, including his February victory. The Yoshito Yahagi trainee last finished sixth May 5 at Funabashi in the Kashiwa Kinen.

7-year-old Tom’s d’Etat was a dominant winner of the Stephen Foster (G2) for trainer Al Stall Jr. but saw a four-race winning streak snapped Aug. 1 in the Whitney (G1). The Kentucky-bred Smart Strike horse went off favored at Saratoga but stumbled at the start and finished third to Improbable and By My Standards. Tom’s d’Etat ranks No. 2 behind only Tiz the Law in the Breeders’ Cup Classic Rankings.

One race after stamping a Breeders’ Cup Sprint “Win and You’re In” ticket by taking Belmont’s Carter Handicap (G1), Vekoma won the Met Mile (G1) to also earn a Dirt Mile berth. Trainer George Weaver and owners will have to choose which way to go with the 4-year-old, Kentucky-bred Candy Ride colt, who’s also No. 10 in the Breeders’ Cup Classic Rankings. Vekoma hasn’t turned in a timed work since July 25.

Fighting Mad entered her 4-year-old season with only five starts to her name but has become the West Coast’s hottest distaffer. After winning the Santa Maria Stakes (G2) on May 31 at Santa Anita, she backed up 9-5 favoritism in the Clement L. Hirsch (G1). The Kentucky-bred filly shares the same trainer (Baffert), owners/breeders (Gary and Mary West) and sire (New Year’s Day) as Maximum Security. She’s back working at Del Mar.

Midnight Bisou looked like her dominant self in the Fleur de Lis (G2), but then took an unexpected loss to Vexatious on Aug. 1 at Saratoga in the Personal Ensign (G1). Steve Asmussen trains the 5-year-old Midnight Lute mare, who was named Eclipse Award 2019 Champion Older Dirt Female. The Kentucky-bred has run twice in the Breeders’ Cup Distaff, finishing third in 2018 and second in 2019. Midnight Bisou is the lone female in the Breeders’ Cup Classic Rankings, checking in at No. 9, and is working at Saratoga.

Asmussen trainee She’s a Julie became a two-time Grade 1 winner with her Ogden Phipps victory. The 5-year-old, Kentucky-bred Elusive Quality mare then followed that effort July 18 with a seventh-place finish at Monmouth Park in the Molly Pitcher Stakes (G3) while carrying 127 pounds, six more than any of her nine rivals. She’s a Julie is working at Saratoga and has the opportunity to defend a 2019 victory in Churchill Downs’ $500,000 La Troienne Stakes (G1) on Sept. 4.

Swiss Skydiver became the first 3-year-old to clinch a Breeders’ Cup Distaff berth with her Alabama (G1) triumph. The Kentucky-bred daughter of Daredevil has tallied four graded stakes victories this year for trainer Kenny McPeek, all of them coming at different tracks. Next up is the Sept. 4 Kentucky Oaks and a showdown with Gamine.

Never one to duck a challenge, Vexatious has made 14 of her 23 career starts in graded stakes. The 6-year-old Jack Sisterson trainee broke through with her biggest win Aug. 1 when beating Midnight Bisou to the wire in the Personal Ensign (G1). The Giant’s Causeway mare posted a 105 Beyer Speed Figure in that victory, the best number a female runner has tallied this season in a main track race going more than a mile. She’s targeting Keeneland’s $400,000 Spinster Stakes (G1) on Oct. 4.

Tom Amoss trainee Serengeti Empress set blazing fractions, then dug in gamely to win the Ballerina (G1). The Kentucky-bred, 4-year-old Alternation filly is now a Grade 1 winner at both one and two turns, having also won the 2019 Kentucky Oaks. Amoss said he’s looking to give Serengeti Empress one more start before the Breeders’ Cup Filly and Mare Sprint, also contested at the Ballerina’s seven furlongs.

The Lir Jet improved to 2-for-2 when winning the Norfolk Stakes (G2) at Royal Ascot. Since that victory, the 2-year-old has run second in a pair of stakes, including the Phoenix (G1) on Aug. 9 at Curragh. Michael Bell trains the Irish-bred Prince of Lir colt.

Circus Maximus, a Galileo colt, won his 4-year-old bow in the Queen Anne (G1), marking the second Royal Ascot victory of his career. He’s followed that victory up with second- and third-place efforts in Group 1 events. The Irish-bred Aidan O’Brien trainee ran fourth last November in the Breeders’ Cup Mile.

Kingman colt Palace Pier improved to 5-for-5 in his career when defeating Circus Maximus and others in the Prix Jacques le Marois (G1). Gosden trains the Great British-bred 3-year-old, who also won the St. James’s Palace Stakes (G1) at Royal Ascot.

The French-bred Raging Bull secured the first “Win and You’re In” berth of the U.S. racing season with his Shoemaker Mile (G1) score. Chad Brown trains the 5-year-old Dark Angel gelding, who was third last out at Keeneland on July 10 in the Maker’s Mark Mile Stakes (G1). He’s entered in Saturday’s $400,000 Fourstardave Handicap (G1) at Saratoga.

Trainer Mark Glatt chose to keep the Twirling Candy colt Collusion Illusion on the West Coast facing older in the Bing Crosby (G1) rather than traveling East to run against fellow 3-year-olds in Saratoga’s H. Allen Jerkens (G1). That proved the right move, with the Florida-bred winning and improving to 5-for-6 lifetime.

George Weaver trainee Vekoma made his Grade 1 breakthrough with a 7 1/4-length Carter (G1) victory. The 4-year-old, Kentucky-bred Candy Ride colt also won a “Win and You’re In” race for the Dirt Mile Division July 4 when taking Belmont’s Metropolitan Handicap (G1). No. 10 in the Breeders’ Cup Classic Rankings, he hasn’t worked since July 25.

Enable scored the first win of her 6-year-old campaign when taking the King George VI and Queen Elizabeth (G1) for a remarkable third time. The Great British-bred daughter of Nathaniel has now earned more than $14 million running for trainer Gosden. The 2018 Breeders’ Cup Turf champ didn’t attempt to defend her title last year. Will she make a trip to the U.S. this November?