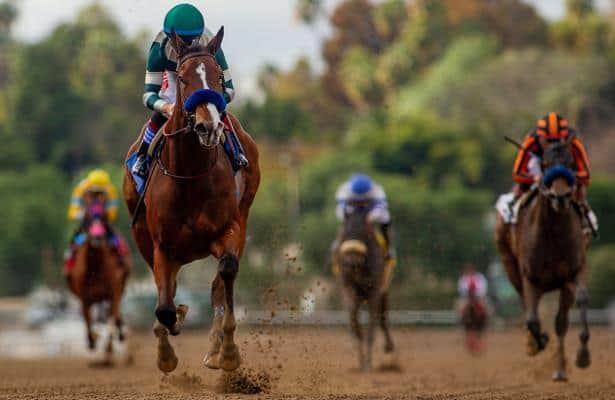 Of the 14 Breeders' Cup races on tap for Del Mar on Nov. 5-6, the $1 million Filly & Mare Sprint is shaping up to have the shortest field and heaviest favorite.

Set to defend her Breeders' Cup title is last year's champion female sprinter Gamine, who in overseas futures markets is trading as the prohibitive 4-5 favorite. Given her towering presence, there are just three other contenders on course to take a swing at Del Mar: Bella Sofia for trainer Rudy Rodriguez, and a pair of Southern California-based rivals in CeCe for trainer Michael McCarthy and Edgeway for trainer John Sadler.

There is also Bell's the One, who earned a second graded stakes win of the year in the Thoroughbred Club of America (G2) and is possible to make the trip for veteran trainer Neil Pessin.

In addition to CeCe, McCarthy is considering Stellar Sound for the fray. She would be cutting back to one turn after running fourth in the Zenyatta (G2) last out. He told Horse Racing Nation Thursday "probably not," with a final decision to be made Monday.

CeCe is priced as a top contender. She has won three of five starts this year, including the Princess Rooney (G2) at Gulfstream Park in July and most recently the Chillingworth Stakes (G3) at Santa Anita.

As for Gamine, she will be going for a sixth-straight victory dating to last year's Breeders' Cup Filly & Mare Sprint at Keeneland. In four starts this year the daughter of Into Mischief has won the Las Flores (G3) at Santa Anita, Derby City Distaff (G1) at Churchill Downs, Great Lady M (G2) at Los Alamitos, and most recently the Ballerina (G1) at Saratoga.

Though based in Southern California, Gamine has never raced at Del Mar in 10 lifetime starts.

Pre-entries for the Filly & Mare Sprint and all other Breeders' Cup races will be taken on Oct. 25.

** No odds posted by bookmakers