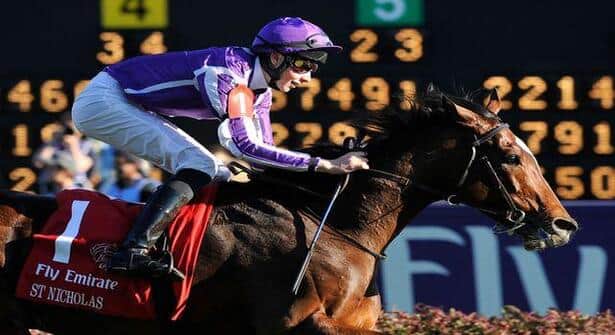 Photo: Eric Patterson/Eclipse Sportswire
Having cleared quarantine Wednesday evening, Aidan O’Brien’s powerful Breeders’ Cup team took to the Santa Anita track for the first time to stretch their legs Thursday morning.
Leading the group was St Nicholas Abbey, who will be bidding to win the Breeders’ Cup Turf for the second time in succession. His regular rider Joseph O’Brien was in the saddle, and having loosened up with a gentle walk and a trot, he put in a nice steady canter around the main track.

Excelebration (Mile) and Treasure Beach (Turf) were the next to follow, and just like St Nicholas Abbey they went for a steady canter on the dirt.

The remainder of the Ballydoyle team of Starspangledbanner (Turf Sprint), Fame And Glory (Marathon), Up, (Filly & Mare Turf), George Vancouver (Juvenile Turf), and Lines of Battle (Juvenile Turf) all followed a similar pattern, as did Infanta Branca, with Ryan Moore on board, who is on the also-eligible list for the Juvenile Fillies Turf.

As he rode back on his pony to the quarantine barn, O’Brien confirmed all his string to be in good shape, and that their first visit to the track had gone well. To the observation that one or two had appeared to have got a little warm, he said, “There was nothing out of the ordinary there, I‘d be more concerned if they hadn’t.”

Back at the barn, Aidan O’Brien again spoke with journalists present, reiterating many of the points he made Wednesday regarding his leading hopes Excelebration and St Nicholas Abbey. He also explained his decision to run Starspangledbanner at Dundalk on Friday (Oct. 26), where he finished fourth in a Listed race over five furlongs.
“We wanted to get him (Starspangledbanner) back into the sprinting habit and felt a race would be better for him than a series of workouts. Five furlongs is on the short side for him now, and from a bad draw I thought he ran well. I am not sure his draw here (14) is ideal, but a strongly run race over six and a half furlongs on this ground should suit him.”

The first of the Europeans to appear on the track at around 6.40 a.m. Thursday was the Ralph Beckett-trained Waterway Run (Juvenile Fillies Turf) under race rider Frankie Dettori, who had a nice stretch on the dirt before returning home.

Sense of Purpose (Marathon) was also out on the dirt this morning, and her preparation was closely watched by her trainer Dermot Weld.

Pat Smullen said after his exercise stint aboard Sense of Purpose, “I think she’s in great shape, but it’s all about how she takes to the surface. It’s an unknown and it’s different, and there’s nothing you can really do back at home to prepare them for it.”

The turf track also saw some action with the Jeremy Noseda-trained pair of The Gold Cheongsam (Juvenile Fillies Turf) and Fantastic Moon (Juvenile Turf) going for nice steady canters.
Noseda, speaking about his two 2yos, said, “I am very happy with both of them, they are picking up and looking better and better each day out here.”

The Noseda duo was closely followed by the John Gosden-trained The Fugue, with William Buick on board, and in similar fashion to those in front of her she completed a circuit of the turf at a steady canter.

Richard Hannon’s Sky Lantern (Juvenile Fillies Turf), in the hands of British champion jockey elect Richard Hughes, also put in some gentle work on the turf. She walked a circuit before cantering one lap of the track.

Richard Hannon Jr, who is representing his father said, “All went well this morning. Sky Lantern took to the grass well and came round the turn nicely. She’s very well, and right now it’s so far, so good.”

Trainer Roger Charlton who arrived in Los Angeles Wednesday night saw his charge Dundonnell (Juvenile Turf) walk a circuit of the track with his pony before doing a lap on his own in the hands of James Doyle at a nice steady pace.

Doyle, Dundonnell’s jockey said, “He seems very well and has adapted to the track. He seems to like his pony and this ground should suit him. It’s good to be here, and to be on a horse with a live chance in a race like this is massive.”

Speaking later, Charlton said, “When you come to these big international meetings, you see so many trainers doing so many different things, walking, jogging, working their horses, giving them easy lead-ups to the races, there are a lot of different approaches. He’s fit and well, and I think Dundonnell will be fine on the firm turf, but if it turns out to be too firm, it’s too firm – we’ll find out on the day.”

Roger Varian’s Nahrain (Filly & Mare Turf) had a very gentle canter around half a circuit of the track Thursday.

Varian said of his filly, “We just took her to the track today for a jog and a canter. She’s fit and well and in good form, and that’s the main thing. Time will tell if she’s good enough. We are putting a pair of blinkers on her at the suggestion of her jockey in the Flower Bowl (John Velazquez), who said that even though she’d won, she’d run a little lazily that day. Maybe the blinkers will give her a little extra edge. This is a tougher race, and you can’t give anything away.” Frankie Dettori has the mount on Friday.

Another Filly & Mare Turf contender, I’m A Dreamer, stepped up on her work from Wednesday and having cantered a circuit of the track picked up the pace and did a very nice breeze in the hands of Laura Pike

Once again the French came out to the track together but soon split up into different parties. Moonlight Cloud (Mile) had a nice stretch of her legs before returning to the barn.

Freddy Head said of Moonlight Cloud, “I am very happy with her. She has had a really good preparation for this race over the past month and a half. She’s been training around a bend back home in Lamorlaye (France), and I have no concerns about the ground. She’s had the perfect build up, and while I have a big respect for Wise Dan and Excelebration, it’s possible she can turn that (Deauville) form around.”

Mikel Delzangles, who flew in from Australia Wednesday, saw his pair of Flotilla (Juvenile Fillies Turf) and Ridasiyna (Filly & Mare Turf) put in a couple of nice steady canters on the main track. As soon as his two runners have run, Delzangles will be heading back to Australia to supervise Dunaden’s participation in Tuesday’s Melbourne Cup.

Delzangles said of his Juvenile Fillies Turf hope Flotilla, “She’s quite a mature filly for a 2 year old, and has taken to things well out here. She seems to have taken her run in the Marcel Boussac (finished 4th) well and I was pleased with that run given the soft ground that day. She should handle the ground here OK, and I will be hoping for a race run at a decent even pace.”

Of his Filly and Mare Turf hope Ridasiyna, Delzangles added, “She impressed me last time in the Prix de l’Opera as I was worried about the soft ground beforehand, but she won well in spite of it. This will be faster ground than she has raced on, and she had her only bad run at Deauville on firm ground, but before that she won on quick ground at Chantilly, so I think it will be OK for her.”

In similar fashion to Wednesday, Alain de Royer-Dupre’s Shareta (Turf) was put through her paces with another solid canter of the track. The daughter of Sinndar, with two group I wins this season in the Prix Vermeille and the Yorkshire Oaks, will be hoping to put the disappointment of her 9th place in last month’s soft ground Prix de L’Arc de Triomphe behind her.

Mahmood Al Zarooni’s Artigiano (Juvenile Turf), who will be ridden by Frankie Dettori on Saturday, had a stretch on the training track before heading out on to the dirt.

Al Zarooni said afterward, “He’s well, and we’re ready. All we can do now is pray for a little racing luck.”

Ceiling Kitty (Juvenile Sprint) was the last of the Europeans to go to the main track Thursday. Trainer Tom Dascombe’s daughter of Red Clubs looked a lot more settled than she did yesterday, and went three-quarters of a circuit at a trot with her pony before returning back down the stretch at a gentle canter.

Asked about her chances, Dascombe said of Ceiling Kitty, “To be honest I am not sure how she’ll go. Five furlongs may be her best trip, the dirt surface is an imponderable, so I am not sure quite what to expect. If she breaks well, if she handles the dirt and if she gets the trip, then she’ll go close.”

The Japanese runner in the Turf, Trailblazer, arrived at the Quarantine Barn at Santa Anita at around 3.15 a.m. on Wednesday after a short ride from Hollywood Park and was hand-walked on arrival for about an hour before being allowed the rest of the day off.

On Thursday, Trailblazer walked for a while in the barn area close to the Receiving Barn before going to the track and galloping a circuit. Speaking on behalf of Team Japan, interpreter Mikki Tsuge reported all to be well with the horse, and that his connections were pleased with the way the horse was coming into the race.