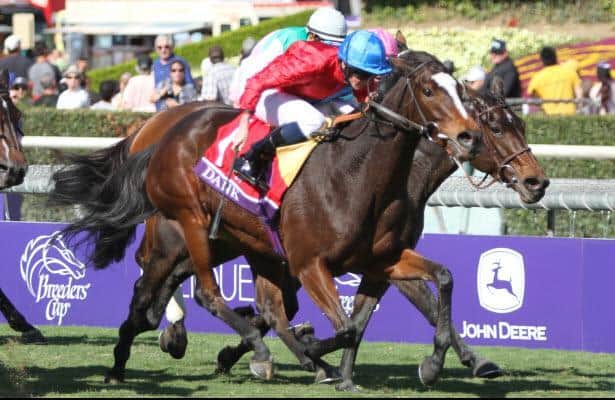 Toast of New York – Jamie Osborne’s challenger for the Breeders’ Cup Classic once again stretched his legs out on the main track Wednesday morning under regular work rider James McCarthy. The 3yo was on his toes as soon as he got on the track but McCarthy soon had him settled down and he then walked half a circuit with his pony before turning round and doing a steady canter all the way to the winning post before returning back to the barn through the paddock. Osborne is expected to arrive in California later Wednesday.

L’Amour De Ma Vie – Pia Brandt’s 5yo looked well at ease as she did a steady canter around a circuit of Santa Anita’s dirt track Wednesday morning. The gray mare, who will be the mount of Maxime Guyon in Friday’s race will be trying to give Brandt her first taste of success in America. Guyon has a good record on board the daughter of Dansili and has been successful in two of her three wins including the Balanchine Stakes at Meydan this year.

Magician – Defending Longines Breeders’ Cup Turf Champion was scratched from the race on Wednesday morning without ever setting foot on the track. He was found to be lame on his off foreleg in the Quarantine Barn when trotting in the barn. Trainer Aidan O’Brien said, “He was acutely lame in his off fore this morning, and it was an instant decision to take him out of the race.”

Magician will be retired and will take up stud duties at Ashford Stud, Kentucky.

Telescope – Highclere Thoroughbred’s Telescope, trained in Newmarket by Michael Stoute, and the mount of Ryan Moore, stretched his legs on the turf track at Santa Anita under regular exercise rider Kevin Bradshaw on Wednesday morning in the company of Stoute’s other Breeders’ Cup runner the defending Filly & Mare Turf champion Dank.

Chicquita – Despite the scratching of Magician, Irish trainer Aidan O’Brien will still be represented in this year’s renewal of the Longines Breeders’ Cup Turf, by the 4yo Chicquita, winner of the Irish Oaks in 2013.  Chicquita traveled in the O’Brien contingent of five horses that arrived at the Quarantine Barn at around 8:30 on Monday night, and should clear quarantine in time to appear on the track on Thursday morning. Frankie Dettori will retain the ride on the filly

Brown Panther – The Tom Dascombe-trained Brown Panther, who is part owned and was bred by former England international footballer Michael Owen, went out on the turf track for a gallop under regular exercise rider Chris Ely, who reported that everything was fine with his horse.

“He breezed about five furlongs and enjoyed himself out there, I just let him do his own thing and he was fine. He has taken to the pony that has been accompanying him at exercise really well, and this was the first time that he’s been on his own since he got here, but he was no problem whatsoever,” Ely reported.

Brown Panther missed his intended last start in the Canadian International, when he became unruly and bolted during the race preliminaries, unseating his regular jockey Richard Kingscote.

Flintshire – The Andre Fabre-trained Flintshire comes into the Turf off a second-place finish in the Prix de L’Arc de Triomphe to the outstanding race mare Treve. He continued with the training routine that he has been following all week, namely a steady canter on the main track, but this time with a slight increase in tempo at the end of his exercise.

Dank, Fiesolana, Just The Judge and Secret Gesture – Secret Gesture with Pat Smullen in the saddle was the first of the European horses to go out on to the main track at 6:30 Wednesday morning. Accompanied by her trainer Ralph Beckett on a pony the daughter of Galileo jogged for 3f before stepping up a gear with a steady canter down the home stretch. Beckett is no stranger to big-race success as he saddled the first two home in last year’s Epsom Oaks.

Smullen, who was sitting on Secret gesture for the first time said, “She was fine and she felt very well, and I hope she is coming back to her best and at her best she is a nice filly.”

Dank, Fiesolana and Just The Judge all went out on to the Turf Course and stepped up on the exercise that they did Tuesday. Dank, with Ryan Moore on board did a far more serious canter Wednesday morning and went at three-quarter pace for half a circuit. Moore was happy with the defending champion’s progress.

Michael Stoute’s travelling head lad James Savage reported, “She was a little bit fresh this morning, but that’s OK, better to be that way than flat.”

Willie McCreery’s Fiesolana, with raceday jockey Billy Lee in the saddle, also went for a slightly quicker spin on the Turf. A gentle canter followed by a slightly quicker one was the order of the day. Recent E.P. Taylor Stakes winner Just The Judge also went through some routine work out on the turf under the guidance of retiring jockey Jamie Spencer. A gentle canter followed by a slightly stronger spin was all that was asked of the filly.

Anodin, Karakontie and Veda – The three French representatives in this year’s renewal of the Breeders’ Cup Mile, again all went out together at around 8:15 a.m. for a canter on the main track, and then stepped up the tempo into a stronger canter at the end of their exercise.

Trainer Freddy Head, successful in this race as both a jockey and as a trainer on three occasions was again at the track to supervise Anodin’s preparations, and remains upbeat about his horse Anodin.

“Everything has gone according to plan,” he said. “The horse is in good form, and we will see how he goes on Saturday.”

His fellow trainer from France Jonathan Pease, who saddles this year’s Poule d’Esssai des Poulains (French 2000 Guineas) winner Karakontie, has yet to arrive in Santa Anita. In his absence Flaxman Holdings Ltd. racing manager Alan Cooper reported all to be well with the horse.

Mustajeeb – Irish trainer Dermot Weld is another overseas trainer who is yet to arrive at Santa Anita, but Mustajeeb continued his preparations with his big race jockey Pat Smullen aboard the horse on the main track a little after 7 a.m.

Smullen said of Mustajeeb who is bidding to give his trainer a first Breeders’ Cup success, “I’d say the horse is in good form, and this race has been the plan or him for a while. He ran well last time, and I’d hope will come on for that run. He didn’t do a lot today, but I’m happy enough with him.”

Toronado – Toronado, trained by Richard Hannon, and the 5-2 morning-line favorite for the race, again looked imposing as he stepped on to the turf track with England’s 2014 champion jockey Richard Hughes aboard. The winner of the Queen Anne Stakes at Royal Ascot was asked to do not much more than a steady canter on the turf, but Toronado has continued to impress work watchers with his well-being and general demeanor. Al Shaqab Racing’s representative Harry Herbert reported that everything about the horse was good as they moved towards Saturday’s test.

Trade Storm – Newmarket trainer David Simcock saddles England’s other runner in the race, Trade Storm, who comes to Santa Anita off an international success in the Woodbine Mile in Toronto in September. Simcock is due to arrive at Santa Anita Wednesday and will be at the track on Thursday morning to supervise the horse’s final preparations according to his travelling head lad Ian Russell.

Trade Storm galloped on the turf under his regular exercise rider Laura Pike, and Russell said afterwards, “Everything is good with both him and our other horse Caspar Netscher (Turf Sprint), they

are both in good form.”

Wind Fire – Wind Fire was the last of the Europeans out on the main track Wednesday morning with regular rider Claire Murray on board. The daughter of Distorted Humor stretched her legs with a steady canter in full view of trainer David Brown and owner Sheikh Fahd (Qatar Racing Limited).

“She’s looking really well” said Brown. “All she wants do is to get on with things.”

The Charlie Fellowes-trained Wet Sail was the first to get on to the turf and Claire Mackay wasted no time in getting the son of  Henrythenavigator to go at a steady canter around a circuit of the track.

“He was so cool going out on to the track this morning and is taking in everything incredibly well. I have always liked him, but he was a bit tricky to handle early on so we gelded him, and since then, he has been a different animal.” said Fellowes.

James Doyle who rode Commemorative in yesterday’s exercise once again was in the saddle and Charlie Hills’s 2yo looked in very good condition as he did a strong canter on the grass which allowed him to stretch his legs.

Hugo Palmer was trackside to witness Aktabantay do a similar piece of work to both Commemorative and Wet Sail. Palmer who is having his first Breeders’ Cup said, “It is nice to be able to have a runner good enough to run in the Breeders’ Cup, and I hope that this is the first of many.”

War Envoy – Aidan O’Brien’s challenger for the Breeder’s Cup Juvenile Turf is expected to clear quarantine later Wednesday and is likely to put in an appearance out on the track in the morning.

Osaila and Prize Exhibit – Richard Hannon’s Osaila with Frankie Dettori in the saddle went out on to the turf course in preparation for Friday’s Juvenile Fillies Turf. The effervescent Dettori looked very pleased to be back at Santa Anita and put in a steady piece of work aboard the daughter of Danehill Dancer.

Prize Exhibit, trained by Jamie Osborne went out on to the main track and did exactly the same as stable companion and Breeders’ Cup Classic contender Toast Of New York.

Qualify – The daughter of Fastnet Rock and the winner of this year’s Weld Park Stakes at The Curragh, who has been allocated the wide draw (14) in this year’s event is expected to be seen out on the track in the morning having cleared quarantine.

Caspar Netscher – Caspar Netscher increased the tempo on Tuesday’s work when cantering a circuit of the turf track under regular work rider Daryl McLaughlin. The son of Dutch Art looked at ease on the Santa Anita turf and is looking to follow up on his Nearctic Stakes win at Woodbine this month. Trainer David Simcock is due to arrive in California later Wednesday.