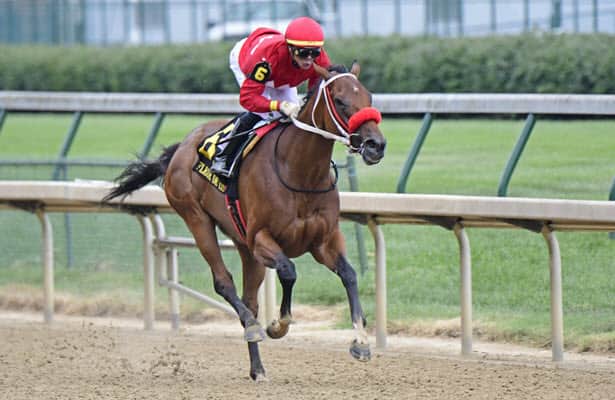 The $2 million Breeders’ Cup Distaff is expected to have a field of 11 fillies and mares who will race 1 1/8 miles at Del Mar on Saturday November 6. This is an accomplished field where all but two of them recorded a win in their most recent start.

The Distaff is one of the original Breeders’ Cup races from 1984 and since then 16 favorites, which includes two victories by Monomoy Girl and two by Royal Delta, won, this, the biggest race of the year for fillies and mares on the dirt. The winner of the Distaff went on to be crowned the division champion 18 times.

To help make a wagering plan, here is an early full field analysis for the Breeders’ Cup Distaff. The morning-line odds from Horse Racing Nation are tentative awaiting the final entries, jockey assignments, and the post-position draw which will be announced on Monday.

The field is listed in alphabetical order, with the jockeys listed from their most recent race.

As Time Goes By (20-1 – American Pharoah – Bob Baffert / John Velazquez – 10: 4-3-1 - $455,600) Trainer Bob Baffert, who wins with 13.6 percent of his Breeders’ Cup starters, does not have a Distaff victory among his 17 wins. As Time Goes By won a pair of Grade 2 stakes in the spring at Santa Anita before trying Grade 1 competition where she did not fare nearly as well. However, a second-place finish in the recent Zenyatta (G2) behind her stablemate Private Mission brought her into consideration for the Distaff. It does feel like this Distaff field presents a very tough challenge for this daughter of American Pharoah. Toss.

Blue Stripe (ARG) (30-1 – Equal Stripes (ARG) – Martin Ferro Nicolas / Frankie Dettori – 6: 4-0-2 - $41,882) Blue Stripe earned a “win and you’re in” spot in the Distaff when she won the Gran Premio Criadores (G1) in May at Palermo in Argentina. She won her last three races but has not run since that Breeders’ Cup qualifier. The quality of those races in South America can be measured by the low $41,000 in earnings from four victories. The six-month layoff and the enormous class challenge are serious obstacles. Toss.

Clairiere (12-1 – Curlin – Steve Asmussen / Ricardo Santana, Jr. – 9: 3-3-2 - $1,190,992) Like so many of the top Steve Asmussen runners, the more they compete the better they perform. Clairiere fits the bill with seven starts this year, all of which came in Grade 1 and 2 competition, most recently a victory in the Cotillion (G1). Asmussen, who has seven Breeders’ Cup victories, won the Distaff in 2014 with Untapable. Clairiere will make her first try against older horses and even though she finished in the top three six times in 2021, this is field figures to be too formidable for her to win against. Trifecta possible.

Dunbar Road (12-1 – Quality Road – Chad Brown / Flavien Prat – 15: 6-2-3 - $1,358,740) Trainer Chad Brown has piled up 15 Breeders’ Cup wins since 2008, but only one of them was in a dirt race. This will be the third appearance in the Distaff for Dunbar Road with a fifth place in 2019 and a third last year behind Monomoy Girl. In her most recent start in the Spinster (G1) at Keeneland, Dunbar Road was second behind Letruska but was clear of the rest of the field. Her last victory was in the 2020 Delaware Handicap (G2). Jockey Flavien Prat will have to decide between her and Private Mission. Use underneath.

Horologist (30-1 – Bill Mott – Horatio DePaz / Junior Alvarado – 26: 9-4-4 - $942,939) This 5-year-old mare has nine wins to her credit. In 2020, she won the Beldame (G2) and the Molly Pitcher (G3) and ended that year with a ninth-place finish in the Distaff. This year, she has two victories in listed stakes at Aqueduct and Saratoga. Even with nearly $1 million in career earnings, it is hard to expect significant improvement over her performance in last year’s Breeders’ Cup. Toss.

Letruska (6-5 – Super Saver – Fausto Gutierrez / Irad Ortiz, Jr. – 22: 17-1-1 - $2,236,459) Expect Letruska to be one of the most heavily bet favorites of this year’s World Championships, with so many reasons why. The 5-year-old mare won her last five races in a row and the four most recent were Breeders’ Cup Challenge qualifiers – the Spinster (G1), Personal Ensign (G1), Fleur de Lis (G2) and Ogden Phipps (G1). Letruska has dominated her competition every time that she has gotten to the lead early in the race. Her only loss, which was by a head to Shedaresthedevil in the Azeri (G2), came when she was in third in the early going and the winner got loose on the front end. Letruska did beat Shedaresthedevil soundly in the Phipps two races later. No doubt that jockey Irad Ortiz Jr. will want to get to the lead. Letruska won at six tracks in 2021. Even if she should lose in the Distaff, she still will be the older dirt female champion. Heavy favorite.

Malathaat (7-2 – Curlin – Todd Pletcher / John Velazquez – 7: 6-1-0 - $1,555,150) Trainer Todd Pletcher’s first Breeders’ Cup victory came in the 2004 Distaff with Ashado. Also among his 11 wins in the World Championships is Stopchargingmaria in this race in 2015. Malathaat is a neck shy of having a perfect seven-race record. Her only loss was in the CCA Oaks (G1) when she was sent to the lead, which had happened only once before in her career. Malathaat has three Grade 1 victories in the best races for 3-year-old fillies – the Ashland, Kentucky Oaks and Alabama. With a contentious early pace expected, Malathaat will get the right race flow as she faces older competition for the first time. That makes her a serious threat in the Distaff. Win contender.

Marche Lorraine (JPN) (30-1 – Orfevre (JPN) – Yoshito Yahagi / Yuga Kawada – 20: 8-2-2 - $1,805,677) Marche Lorraine won a rich purse in her last start in the Breeders’ Gold Cup, which was run in Japan. Typically, horses coming to run from Japan have high career earnings because of the big purses that are available. It is hard to support horses that have run only in Japan because the competition just does not measure up to American stakes races. Toss.

Private Mission (12-1 – Into Mischief – Bob Baffert / Flavien Prat – 5: 4-0-0 - $256,800) This lightly raced 3-year-old won all three of her starts this year, including the Zenyatta (G2), which was a Breeders’ Cup Challenge Series race, and the Torrey Pines (G3) at Del Mar. Both of those wins were by clear margins and came after pressing the pace. She is definitely in the best form of her career, but she has never faced competition like the top three or four horses in this field. Use underneath.

Royal Flag (12-1 – Candy Ride – Chad Brown / Joel Rosario – 12: 6-3-3 - $573,020) Royal Flag is the second runner from the barn of Chad Brown, whose runners have been winning graded stakes across the country on dirt and turf in September and October. The daughter of Candy Ride got her second graded-stakes victory of the year in the Beldame (G2) when she drew off to win by more than four lengths. She was third behind Letruska in the Personal Ensign (G1), beaten by a only half-length. In 12 career races, she never ran poorly while finishing in the top three every time. Trifecta finish possible.

Shedaresthedevil (4-1 – Daredevil – Brad Cox / Florent Geroux – 16: 9-2-4 - $2,291,458) Trainer Brad Cox has won seven Breeders’ Cup races since 2018, including two Distaffs with Monomoy Girl. Cox has had only 20 starts in the World Championships since 2014, so that means he won with 35 percent of his starters. Shedaresthedevil is the only horse to beat Letruska in her last eight starts – an easy fact to grab if you want try to beat the favorite in the Distaff. The daughter of Daredevil won the Clement L. Hirsch Stakes (G1), which was a “win and you’re in” qualifier, at Del Mar in August with a stalking trip. In her final prep race, she won the Locust Grove (G3) by a neck while running on the lead. Win contender.

Summary: Letruska heads a stellar field in the Distaff that is loaded with horses in excellent form. It includes several horses with past performances that are loaded with graded stakes victories – Letruska, Malathaat, Private Mission, Royal Flag, and Shedaresthedevil.

How will the contenders deal with the favorite Letruska? Their chances to win will wane if they let the streaking division leader run loose on the front end. But it is unlikely that any of them can survive a pace duel with her.

Private Mission feels like a one-dimensional horse that, like many Baffert runners, has to go the lead. Malathaat, Royal Flag and Shedaresthedevil have noteworthy wins running from off the pace to some extent.

This is Letruska’s Distaff to win, and if she can once again turn in a top performance, she will be very hard to beat in the Distaff.