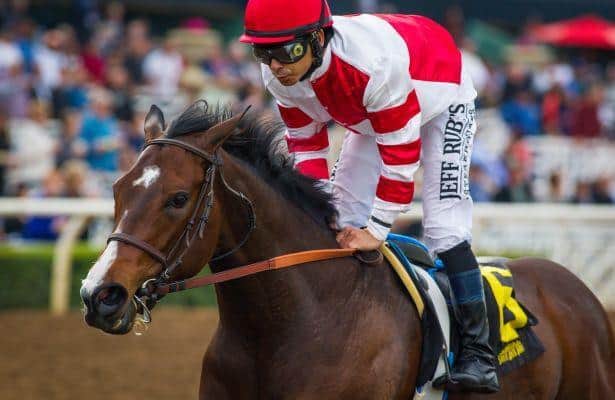 Beholder – Champion 6yo mare Beholder went to the track at 7 a.m. and galloped 1 1/2 mile over the main track in preparation for the Longines Breeders’ Cup Distaff.

“She’s feeling great, really moving good across the track,” said regular exercise rider Janeen Painter, who was in the irons. “She’s been really focused, behaving herself well, so I think she is ready to give her best shot.”

Before the main track opened, Painter reflected on her time with the two-time Breeders’ Cup heroine and three-time Eclipse Award winner Beholder.

“I galloped her a little bit at 2, mostly at late 4, 5 and 6. She’s much bigger and stronger that we ever thought she would be. When she came in her 4-year-old year, wow. You could see how much she had developed during the time she had off. “

Painter recalls the 2015 Pacific Classic as her favorite Beholder moment. “Of course the Pacific Classic, that was pretty special. The Kentucky Oaks race, that was a great race too, even though she ran second that is up there too. I get excited every time she runs and I know she runs her heart out every time she runs. You can’t say that about every single racehorse there is, but she does, she gives it 100 percent.”

Hall of Fame jockey Gary Stevens, who rode Beholder to victory in the 2013 Distaff at Santa Anita, expressed happiness with his Distaff post position (post eight), and also pointed out the 2015 Pacific Classic as his favorite Beholder memory.

“The Pacific Classic is my favorite Beholder moment. She beat the boys, it was a huge race and very memorable,” Stevens said.

“On paper, this is the best Distaff I’ve ridden in, but I can go back to 1988 with a great filly and a great mare in Winning Colors and Personal Ensign, I’ve been in some good Distaffs before. I don’t want to take anything away from years past, as I’ve said before, Beholder is the best horse I have ever ridden.”

Corona Del Inca – The 5yo Luhuk mare strolled to an easy gallop one lap around the main track at 7:45 a.m. Uruguayan jockey Pablo Falero, a legend in his native country and in Argentina, was in the irons.

“For me, it is a great honor to be here, and is a very important commitment and a life-long dream,” Falero said about his first Breeders’ Cup participation.

Corona Del Inca earned an automatic berth into the Distaff after annexing the Gran Premio Criadores by the smallest of margins at Palermo on May 1.

Curalina – Eclipse Thoroughbred Partners’ Curalina galloped 1 1/4m at Santa Anita Thursday in preparation for Friday’s Distaff, which will be her first start since finishing second in the Personal Ensign at Saratoga Aug. 27.

“We felt like if we were going to take our best shot at the Breeders’ Cup, bypassing the Spinster and the Beldame like we did last year with (2015 Distaff winner) Stopchargingmaria was the correct approach for her,” trainer Todd Pletcher said. “She does run well fresh. It takes a lot of discipline to pass up the Beldame or the Spinster, races like that where you’d be favored or certainly one of the favorites.”

Forever Unbridled – Charles Fipke’s homebred multiple Grade I winner Forever Unbridled left Barn 59 at 5:30 a.m. and galloped an easy 1 1/4m under the watchful gaze of trainer Dallas Stewart. Stewart will try to win his second Breeders’ Cup Distaff with a daughter of Unbridled’s Song, having landed his lone World Championships victory with Roger Devenport’s Unbridled Elaine in 2001 at Belmont Park.

I’m a Chatterbox – The 4yo Munnings filly I’m a Chatterbox, ridden by her trainer Larry Jones, went to the track at 7:50 a.m. for an easy 1m gallop and then visited the paddock for the third straight day.

Jones is seeking his first Breeders’ Cup victory, but did found success with two other fillies he brought to the event. In 2007, Proud Spell finished second in the Juvenile Fillies before winning the Kentucky Oaks the next spring and in 2011, Havre de Grace finished fourth against the males in the Breeders’ Cup Classic en route to Horse of the Year honors. When asked how I’m a Chatterbox stacked up against those two fillies, Jones replied, “She’s always been an overachiever. She was overlooked at the sales, maybe because she was from the first crop of Munnings and her dam hadn’t produced much. But, she always tries so hard and definitely matches up to them.”

The only time I’m a Chatterbox was worse than second this year was when she was fourth behind Cavorting in the Personal Ensign Stakes (G1) at Saratoga in late August. She then was a dominant winner of the Spinster Stakes (G1) at Keeneland in her last race.

“If there was a bias that day at Saratoga, it definitely worked against us,” Jones said. “No one was going to catch the winner. We feel our filly has only gotten better since then. But, this is tough race. There’s going to a Grade 1 winner finishing sixth in here.”

Land Over Sea – Land Over Sea was joined by Team O'Neill Breeders' Cup entrants Ralis (Turf), Gomo (Filly and Mare Sprint) and Term of Art (Juvenile) for morning gallops leading up to the two-day Breeders' Cup Championships at Santa Anita.

Trainer Doug O'Neill, who watched the stablemates' exercises from the apron at mid-stretch said, referring specifically to Land Over Sea, “She's been second to Songbird on three occasions and was runner-up in the Kentucky Oaks. So, despite her long odds, we feel like she deserves this chance, especially here on her home track.”

Obviously having watching ample amounts of pre-election coverage, O'Neill added with a smile, “However, our path to victory might require us turning red states blue and blue states red.”

Songbird – Now just a little over 24 hours away from the year's filly and mare championship-deciding race of the year, the Longines Breeders' Cup Distaff, trainer Jerry Hollendorfer watched his prized pupil, 6-5 morning line choice Songbird, walk in front of his barn.

“You really can't plan for how to run the race, because the moment the gates open, it could all change,” he said. “We know she can go to the front or sit off the pace; we're comfortable with her versatility. This really becomes a riders' race so you need to have confidence in your jockey. Mike (Smith) has ridden her in all of her starts and knows her very well.”

Added the hall-of-fame conditioner, “She's been so consistent, I really can't pick out one race that really stands out. With her, they're all special. But she was really good in her last start in Pennsylvania (the Cotillion Stakes) and she's even better now.”

Songbird went to the track for the final time Thursday morning in advance of Friday's Distaff, galloping 1m under Edgar Rodriguez. The Kentucky bred is scheduled for a schooling session in the paddock after Thursday's first race.

“She'll school in the paddock between races this afternoon,” trainer John Sadler said.

Sadler is undecided about what Stellar Wind will do Friday morning, the day of the race.

Asked what it would take for Stellar Wind to win, Sadler said: “She needs a good trip. I don't know what that trip is, but just a nice, smooth one and she should do well.”