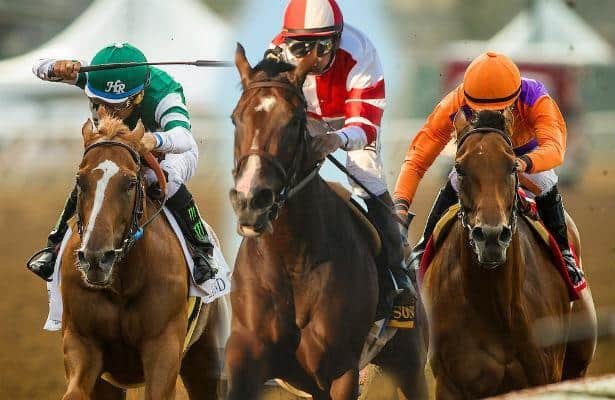 The Grade 1 2016 Breeders’ Cup Distaff may have only drawn a field of nine pre-entries, but they are nine of the best fillies and mares in the country. Heading up the 1 1/8 mile race are Eclipse champions Beholder, Songbird, and Stellar Wind. For more on the Distaff, check out Breeders’ Cup Distaff 2016: Pre-entry Analysis from Shapper da California Capper.

Below is the pre-entered field with projected odds by Zipse at the Track.

Beholder, winner of the 2013 Distaff, enters this year’s edition off three straight defeats, something she has never experienced before this year. After drawing the rail in the Grade 1 Clement L. Hirsh and the two post in the Grade 1 Zenyatta, Beholder wasn’t left with much choice but to take the lead, leaving Stellar Wind to sit off the pace, and ultimately overtake her. In between those two races, Beholder ran a bang-up race in the Grade 1 Pacific Classic, but there was no catching California Chrome that day. The six-year-old Henny Hughes mare is no stranger to the Breeders’ Cup winner’s circle, having won both the 2012 Juvenile Fillies and the 2013 Distaff. Her two Breeders’ Cup wins were both at Santa Anita Park, where the 2016 Breeders’ Cup will take place.

Three-year-old filly Songbird will be facing her biggest challenge yet in the Distaff. Her perfect record of 11 is about to be put on the line as she faces older fillies and mares for the first time. This race against the best fillies and mares in the country may force Songbird to find another gear that we have not yet seen. Following her Grade 1 Cotillion win, jockey Mike Smith said he had not reached the bottom of her yet. Winner of last year’s Breeders’ Cup Juvenile Fillies, the daughter of Medaglia d’Oro is back this year for a second Breeders’ Cup title.

Stellar Wind is also an imposing filly in this race. She put in a game fight against older fillies and mares in last year’s Breeders’ Cup Distaff only to be beaten by a neck. She then came back in 2016 to run second to Beholder in the Grade 1 Vanity Mile before stealing the spotlight from her in both the Clement L. Hirsch and the Zenyatta. The four-year-old daughter of Curlin showed she was good last year, winning four of six starts, but her ability to overcome Beholder this year, a multi-champion mare, has put her in the top ranks among the best fillies and mares in the country.

2022 Preakness Stakes: Ranking the field first to last
Steve Asmussen and Ron Winchell might still be in...
x