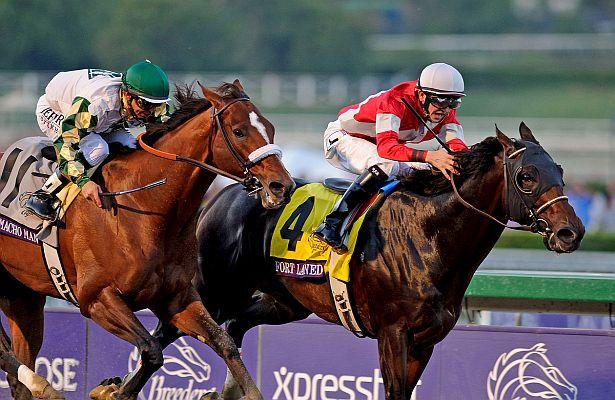 Ian Wilkes (Fort Larned, Classic, post 7) – “That’s OK. Seven’s a lucky number for me and looks good. Now it is all up to (jockey) Brian (Hernandez Jr.).”

Kathy Ritvo (Mucho Macho Man, Classic, post 6) – “It’s very good. I’m happy with it. I’d probably prefer not to get the one, but everything else is fine. We’re going to let (jockey) Gary (Stevens) handle it. He’s going to have to see how it goes.”

Manny Azpurua (Street Girl, Distaff, post 1) – “There were two numbers left (the one and five) and I knew I was going to get the one. But it doesn’t really matter in a six-horse field and we are not going to the lead anyway.”

Richard Mandella (Beholder, Distaff, post 5) – “It’s a good post. They were down to having the one and the five left and I sure didn’t want the one. So the five is fine.”

Bob Baffert (Game On Dude, Classic, post 9) – “I like his outside post; I didn’t want to be buried down on the inside. The field is strong. I was looking at it and if you’re putting in your Pick 4s or your Pick 6s, there’s not one (race) you can single. It’s so competitive this year.

“I think he’s much different horse this year in the way he’s run and the way he’s been training. He just seems like he’s in the zone right now.  Everything has to go smooth. The horse has to fire. The jockey has to fire.  We have to have them ready, so I feel really confident that he’s ready to run. Hopefully this could be his year.”

Bernie Schiappa (owner Game On Dude, Classic, post 9) – “I love our position, I love the draw. But you know it's a horse race so get him to the gate and Mike Smith will do the rest. I was hoping he would draw outside and it's a great position. Hopefully he'll get the job done and go on to be Horse of the Year.

“Being the favorite, there's always a little more pressure. But the horse deserves a little more recognition than he has received this year, I believe. I'm a little bit biased, but he's a fabulous horse and only Bob Baffert could have made him the horse that he is.”

Eric Guillot (Moreno, Classic, post 4) – “I’m not crazy about it. I was hoping I’d get a little bit further out and have the speed inside me, but it is what it is. I guess the post position in the beginning of the race isn’t as important as the end, right?”

D. Wayne Lukas, (Will Take Charge, Classic, post 10) – “The post isn’t a problem. These 3-year-olds start getting good as they go toward four and what’s most important on a day like Breeders’ Cup is you have to have them right on the right day.”