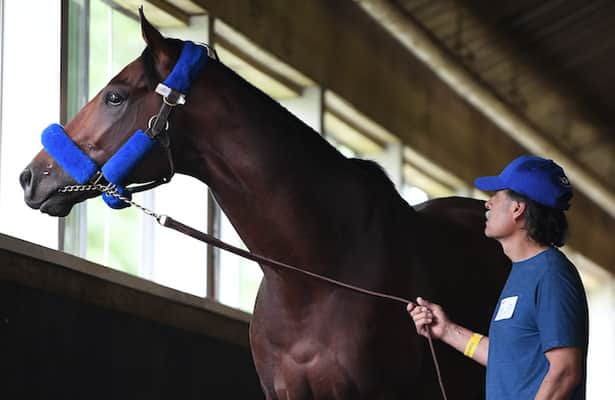 Flightline’s list of races might be short, but it is impressive. So impressive that he was made the early favorite Sunday in futures betting offshore for Breeders’ Cup Classic 2022.

Undefeated in four races with a six-length victory last month in the Met Mile (G1), 4-year-old Flightline opened at 3-1 at Bovada, the wagering site that is based in Costa Rica.

Owned by a partnership led by Kosta and Pete Hronis and trained by John Sadler, the $1 million Tapit colt is expected to start next in the Pacific Classic (G1) on Sept. 3 at Del Mar.

RELATED: A fit, happy Flightline is poised to race in 2023.

Country Grammer, the 5-year-old horse who won the Dubai World Cup (G1) before being transferred from Bob Baffert to trainer Sean McCarthy, was 12-1. So was Mo Donegal, the Belmont Stakes winner who still was listed even though he was ruled out of any further racing this year because of a bone bruise.

Charge It, the 3-year-old colt who ran away with Saturday’s Dwyer (G3) by 23 lengths, opened at 16-1, the same odds as Kentucky Derby and Preakness runner-up Epicenter.

There were 24 horses listed in the offshore futures for the Nov. 5 running of the Breeders’ Cup Classic at Keeneland.