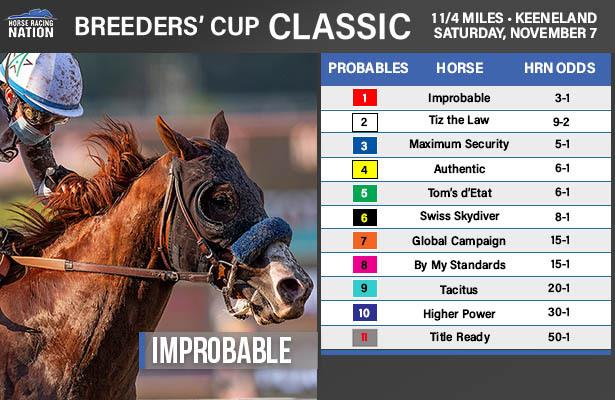 The 2020 Breeders’ Cup Classic will match up the top 3-year-olds Authentic and Tiz the Law against the horses that have been on top of the Older Male division throughout the year.

A field of 11 pre-entries was announced on Wednesday. Trainer Bob Baffert has three: the 4-year-olds Improbable and Maximum Security, along with the 3-year-old Authentic.

Since the inaugural Breeders’ Cup in 1984, 13 3-year-olds have won the Classic. Interestingly, that happened most recently in 2016, when Arrogate gave Baffert his third win in this race in his career. It was also Baffert's third consecutive victory in the Classic, in a winning streak that began in 2014 with Bayern and included American Pharoah at Keeneland in 2015.

The morning line shows how contentious the field is for this year’s Classic. With five horses at odds of 6-1 or lower and no heavy favorite likely, that leaves tough decisions as racing fans handicap the Breeders’ Cup.

To help make a wagering plan, here is a full field analysis for the Breeders’ Cup Classic, which will be run on Nov. 7 at Keeneland. The morning line odds from Horse Racing Nation are based on the pre-entries. The post-position draw is scheduled for Monday, Nov. 2, at 5 p.m. ET.

Improbable [ML 3-1 – City Zip - B. Baffert/I. Ortiz Jr. – 14: 7-3-0 - $1,709,520] — Based on his three consecutive Grade 1 victories in the Awesome Again, Whitney and Hollywood Gold Cup, Improbable deserves to be the Classic favorite, and he's the most likely winner. In those recent wins, the son of City Zip beat more of the Older Male division runners that are in this field — Maximum Security, By My Standards, Tom’s d’ Etat, Higher Power. He is proven at the 10-furlong distance and has overcome his starting gate issues. Most of all, Improbable has developed a more patient stalking style that should serve him well in the biggest race of his career. Win Contender

Tiz the Law [ML 9-2 – Constitution - B. Tagg/M. Franco – 8: 6-1-1 - $2,615,300] — The winner of the Grade 1 Belmont Stakes and Travers will return to the races following his loss to Authentic in the September running of the Kentucky Derby. His only two losses were at Churchill Downs, and trainer Barclay Tagg insists that his horse just does not appreciate the surface at the Louisville track. That being said, the 3-year-old Tiz the Law will have to face older horses for the first time, and this is a formidable group of them. In Classic history, 3-year-olds have won the race 37% of the time, and in November the difference between the age groups is not as significant. He will get two months between races, which should be ideal. Win Contender

Maximum Security [ML 5-1 – New Year’s Day - B. Baffert/L. Saez – 13: 10-2-0 - $12,251,900] — Maximum Security has 10 wins and the most money earned in the field. His terrific racing resume got one of its few negative results when he was clearly defeated by his stablemate Improbable in the Awesome Again. Baffert insists that he did not have Maximum Security at his fittest for that showdown. Whether that was true or not, Baffert has been training the son of New Year’s Day rigorously, and all reports say that he has looked tremendous in the morning. Although he has raced and won all over the world, he has never run at Keeneland. Maximum Security at the top of his game cannot be ignored because he will be coming with his determined and hard-to-beat stretch run. Top Choice

Authentic [ML 6-1 – Into Mischief - B. Baffert/J. Velazquez – 7: 5-2-0 - $3,071,200] — This year’s Kentucky Derby winner will bring his front-running style to Keeneland for the first time. In the Derby, he proved his ability to get the Classic distance when he could not be passed by Tiz the Law. In the Preakness, he lost a stretch duel to the filly Swiss Skydiver. Authentic will face older horses for the first time, but his trainer won the Classic three times, all with 3-year-olds. It looks like he will have company on the front end in the big race against a very tough field, and it will be his third race since Sept. 5. Toss

Tom's d'Etat [ML 6-1 – Smart Strike – A. Stall Jr./J. Rosario – 19: 11-2-2 - $1,702,272] — The tough and talented 7-year-old was the leader of the Older Male division in the early stages of the year, based on his wins in the Stephen Foster (G2) and the Oaklawn Mile. In the Foster he defeated By My Standards, and at Oaklawn he beat Improbable. However, the tables turned in the Whitney, when Tom’s d’Etat broke poorly and could not overcome that disadvantage against a slow pace and a top performance from Improbable. Trainer Al Stall Jr. has given his star plenty of time to prepare since Saratoga, and his son of Smart Strike has run well fresh in the past. Also, he is the only horse in the field who has won a stakes race at Keeneland and one of the few to have even run there. Win Contender

Global Campaign [ML 15-1 – Curlin - S. Hough/J. Castellano – 9: 6-0-1 - $781,080] — This son of Curlin got a breakthrough victory in the Woodward (G1) in September. The 4-year-old flashed plenty of talent in his career but has been plagued by foot problems, which have kept him out of several important races. At Saratoga, he got his first Grade 1 win while racing on the front end in a field that included Tacitus. He will have company in the early going in the Classic. Toss

By My Standards [ML 15-1 – Goldencents – B. Calhoun/G. Saez – 12: 6-4-1 - $1,764,430] — As his record shows, By My Standards always puts forth his best effort. The only race where he didn’t hit the board was in the Kentucky Derby in just the fourth start of his career. This year he tangled with the top horses in the division and with excellent results. Most recently, he won the Alysheba (G2) at Churchill Downs and was second in the Whitney behind Improbable but ahead of Tom’s d’Etat. Through all of this, he has yet to notch a Grade 1 victory. I expect him to run well at much higher odds than usual, but as a son of Goldencents, the mile-and-a-quarter distance of the Classic may not be ideal. Use underneath

Tacitus [ML 20-1 – Tapit – B. Mott/J. Ortiz – 14: 4-4-3 - $2,947,500] — Tacitus has won nearly $3 million in a career that lacks a Grade 1 victory and includes several second and third place finishes in big races. Most recently he was third in the Jockey Club Gold Cup (G3), beaten by a pair of 3-year-olds, and before that he was second in the Woodward (G1) behind Global Campaign. He will bring the biggest odds of his career to the Classic and likely will have to run from farther behind the lead than he has done recently. That may be a good thing as the distance will not be a problem and he could have some late run and hit the trifecta or superfecta at a big price. Use underneath

Title Ready [ML 50-1 – More Than Ready - D. Stewart/C. Lanerie – 22: 4-6-4 - $514,180] — Title Ready will be the longest price in the field as a horse without a stakes victory. The Dallas Stewart runner has placed in a few graded stakes races, including a third in the Fayette (G2) at Keeneland. He also won allowance at the Lexington track during the brief July meeting. Toss

Swiss Skydiver [ML 8-1 – Daredevil – K. McPeek/R. Albarado – 11: 6-3-1 - $1,792,980] — Swiss Skydiver was cross-entered in the Breeders’ Cup Distaff and the Classic, with the Distaff listed as first preference. That is by no means a commitment to run in the race against fillies and mares. The connections of 3-year-old filly will have the rest of the week to make a decision. Her victory in the Preakness over Kentucky Derby winner Authentic wrapped up a divisional championship. All year long she has done the unexpected, winning five times at tracks across the country. In the Distaff, she would have to face the Champion Monomoy Girl in what would be a great match-up between the two of the best female dirt stars. In the Classic, Swiss Skydiver would have to face the toughest field assembled anywhere in the country this year. A loss in the Classic would not tarnish her record, but a victory would make her a viable candidate for Horse of the Year. Use underneath