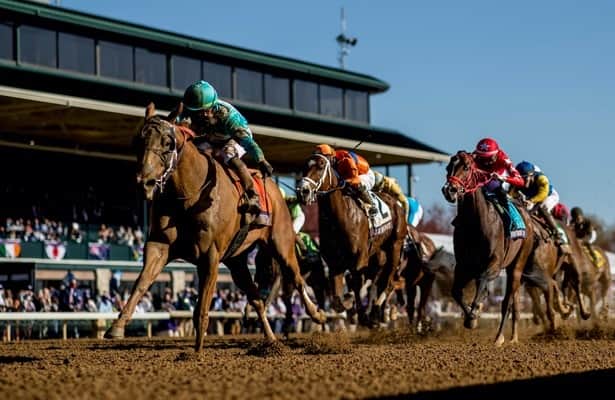 This year’s Breeders' Cup will be held at Keeneland Race Course in Lexington, Ky., on Nov. 4-5. The first U.S. Breeders’ Cup Challenge Series race of the year will be the Shoemaker Mile (G1) at Santa Anita Park on May 30.

The Breeders’ Cup Challenge Series, now in its 15th year, will be hosted at many of the world’s premier racetracks in Argentina, Brazil, Canada, Chile, England, France, Ireland, Japan, Peru, South Africa, and the United States.

The 2022 series in the U.S. has been restructured into a regional qualifying program to balance divisional competition across the country.

The exception to the regional format will be in the Breeders’ Cup Classic Division, which will have six domestic races in this year’s series. The complete 2022 schedule is available here.

“We’re excited to introduce our restructured regional format for the year’s domestic Challenge Series to better identify our top qualifiers from each part of the country as they move on to the World Championships,” said Dora Delgado, Breeders’ Cup executive vice president and chief racing officer. “The Win and You’re In format has been in place since 2007 and provides a fast track to the World Championships through an automatic selection into the race and free entry fees. We look forward to working again with our racetrack partners in conducting the Challenge Series races around the world this year.”

If not already Breeders’ Cup nominated, the Challenge winner must be nominated to the Breeders’ Cup program by the Championships’ pre-entry deadline of Oct. 24 to receive the rewards.

Next Monday’s Shoemaker Mile winner will gain a free starting position in the $2 million Breeders’ Cup Mile (G1) and will be designated as the Breeders’ Cup Challenge Western representative in the World Championships. The Fourstardave (G1) at Saratoga (East) on Aug. 13, and the Turf Mile (G1) at Keeneland (Midwest) on Oct. 8, are the other two automatic qualifiers in the Mile Division.

In support of the Horse Racing Integrity and Safety Act (HISA), which was signed into law in the U.S. in 2020, medications will not be permitted to be administered within 24 hours for all Breeders’ Cup Challenge Series races.

Some of the highlights of this year’s Challenge Series are as follows:

• NBC and CNBC will televise the “Breeders’ Cup Challenge Series: Win and You’re In - presented by America’s Best Racing,” featuring nine live programs in the U.S. this summer and fall. The full 2022 television schedule will be announced on Wednesday, May 25.

• There will be eight automatic berths awarded for the $6 million Breeders’ Cup Classic (G1). The 4-year-old Cafe Pharoah became the first horse to qualify for this year’s Breeders’ Cup Classic when he won the February Stakes (G1) at Tokyo Racecourse in Japan on Feb. 20. The next automatic qualifier in the division will be the Stephen Foster Stakes (G2) at Churchill Downs on July 2. The Stephen Foster will be followed by the Haskell Stakes (G1) at Monmouth Park on July 23 and the Whitney (G1) at Saratoga Race Course on Aug. 6. The Juddmonte International Stakes (G1) at York in England on Aug. 17 will be the only European Win and You’re In for the Classic. There will be two Classic Division automatic qualifying races on Sept. 3 when Saratoga hosts The Jockey Club Gold Cup (G1), and Del Mar will be the site of the Pacific Classic (G1). The Awesome Again Stakes (G1) at Santa Anita Park on Oct. 1 will be the final Classic Win and You’re In this year.

• Automatic qualifying positions in the U.S. for the $4 million Breeders’ Cup Turf (G1) will be held on three consecutive weekends, beginning in the East with the Sword Dancer (G1) at Saratoga on Aug. 27, continuing in the West with the Del Mar Handicap (G2) at Del Mar on Sept. 3, and concluding in the Midwest with the Turf Cup (G2) at Kentucky Downs on Sept. 10.

• In the U.S., the three “Win and You’re In” races for the $2 million Breeders’ Cup Distaff (G1) will begin in the East starting with the Ogden Phipps (G1) on June 11 as part of the Belmont Stakes (G1) day program at Belmont Park. The Ogden Phipps will be followed by the West automatic qualifier, the Clement L. Hirsch Stakes (G1) at Del Mar on Aug 6. The Midwest Distaff division Win and You’re In will be the  Spinster (G1) at Keeneland on Oct. 9.

• The three domestic races in the Filly & Mare Turf Division begin with the return of the Beverly D. Stakes (G1), which will be run this year at Churchill Downs on Aug. 13 as the Midwest automatic qualifier into the $2 million Maker’s Mark Breeders’ Cup Filly & Mare Turf (G1). The Beverly D. will be followed by the Flower Bowl (G2) at Saratoga, representing the East, on Sept. 3, and then the West automatic qualifier, the Rodeo Drive Stakes (G1) at Santa Anita, on Oct. 8.

• The three automatic berths into the $2 million Breeders’ Cup Juvenile (G1) will be decided in October. In the East, the Champagne Stakes (G1) at Belmont Park on Oct. 1 leads the trio. The two other Juvenile Division races will both be held on Oct. 8. Keeneland will host the Midwest Win and You’re In, the Breeders’ Futurity (G1), and in the West, Santa Anita will be the site for the American Pharoah Stakes (G1).

Complementing the season in North America, there will be 39 international Breeders’ Cup Challenge races. The international portion of the series began on Dec. 11 when the 7-year-old Village King (ARG) captured the Gran Premio International Carlos Pellegrini (G1) at Hipodromo de San Isidro in Argentina to gain the first automatic starting berth into the Breeders’ Cup Turf.

On May 1, La Validada (ARG) earned an invitation to the  Breeders’ Cup Distaff by winning the Gran Premio Criadores (G1) at Hipodromo Palermo in Argentina, and on May 15, Sodashi (JPN) won the Victoria Mile (G1) at Tokyo Racecourse and earned a Win and You’re In position for the Maker’s Mark Breeders’ Cup Filly & Mare Turf.