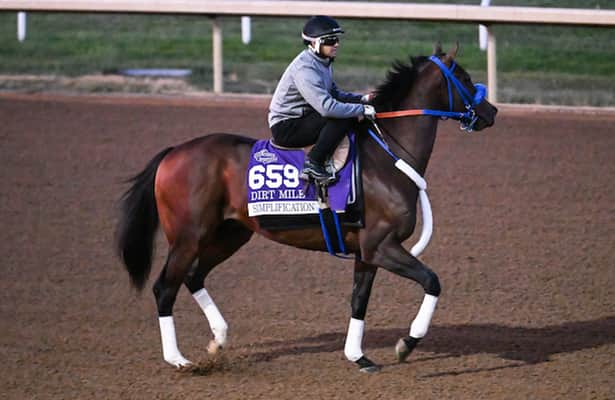 Tami Bobo was 16 when her parents divorced and headed in different directions. Rather than accompany one of them, she took her own path.

When she was 17, she became a single mother, scrambling to earn enough money to meet her needs and those of her newborn daughter, Brittney. She gave riding lessons in Oxford, Fla. She broke and trained horses. She bought and sold horses. Whatever it took.

“I certainly wouldn’t promote being a young mother. Looking back on it, in hindsight it was very difficult,” she said. “But it taught me a lot about life and how to navigate my way through it.”

She developed a determination and resourcefulness that help to explain why, in only her 11th year in the Thoroughbred industry, she will be represented by two horses in the Breeders’ Cup. Both are trained by Antonio Sano. Simplification is co-owned with Tristan DeMeric. She partnered with Lugamo Racing Stable on Congruent.

Simplification, a Florida-bred who was fourth in the Kentucky Derby and sixth in the Preakness after winning the Fountain of Youth Stakes (G2) at his Gulfstream Park home base, will take his usual best shot in the Dirt Mile on Saturday. Congruent, coming off a 2 1/2-length win in the slop in the Oct. 1 Laurel Futurity, faces long odds against overwhelming favorite Cave Rock in the Juvenile to cap Future Stars Friday.

Simplification has earned $769,950 through 11 starts. He represents Bobo’s willingness to take on risk. She decided to keep him after he was found to have sesamoiditis. She was convinced she would not receive fair value for him at auction.

The sale not attempted worked out well. “Simplification has always been there for us and shown up,” Bobo said. “Any time we’ve run him, he’s just a trouper.”

She and her husband, Fernando de Jesus, established First Finds Farm in Ocala, Fla., as a pinhooking operation for weanlings and yearlings in 2016. Congruent is one of the more intriguing prospects she has come across during that time.

She was so surprised when there was not heavy bidding for the son of Tapit at Fasig-Tipton’s Kentucky Select Yearling Sale that she signed the $200,000 sales slip “Shocker.” She went on to sell him to Lugamo Racing Stable, one of Sano’s clients, for $350,000 as a 2-year-old in training. As a testament to how much she believes in the colt, she bought back in.

Although the Juvenile represents Congruent’s first crack against graded-stakes company, Bobo is not hesitant to take that shot. “I think you can expect about anything in that entire race because they are babies,” she said. “They change daily, they mature daily.” She warned against judging any 2-year-olds.

Bobo entrusts virtually all of her runners to Sano because of his hands-on approach. He currently oversees 19 horses for her. “She has been a long-time supporter of the barn,” the Venezuela native said. “She trusts our work and decision-making, which, as a trainer, is the exact backup you need.”

Sano was impressed by the calming influence Bobo had on Simplification during the hustle and bustle of Preakness week at Pimlico Race Course. According to the trainer, usually high-strung Simplification was so docile in Bobo’s company that children were able to pose with him for pictures.

“I have a mentality for their mindset. I know what they are going to do before they do it,” she said of her ability to read horses. “I know that sounds strange, but I think other horsemen will tell you that.”

Bobo has displayed a keen eye for a horse time and again. In her first pinhooking venture, she made a private purchase of Take Charge Indy after he failed to meet his $80,000 reserve at the 2010 Keeneland September Yearling Sale. His value jumped as he began to display his talent on the track, leading to a substantial gain when she sold a majority interest in him ahead of a 19th-place finish in the Kentucky Derby.

Bobo and de Jesus each produce short lists at sales before comparing notes. Considering their combined skills, Sano calls them a “dream team.”

Bobo said she is constantly searching for “Saturday” horses at sales, meaning runners she believes have the talent and pedigree to possibly advance to major stakes at classic distances. In the case of this year’s Breeders’ Cup, it so happens she has a Friday horse as well.