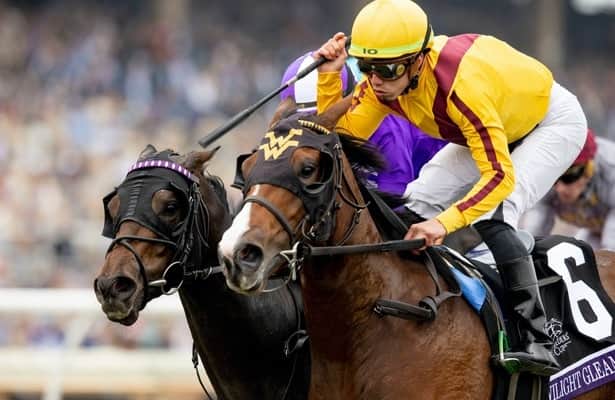 Twilight Gleaming (5-1) led at every call and ran away to win the Grade 2, $1 million Breeders’ Cup Juvenile Turf Sprint, the first of 14 championships being run the next two days at Del Mar.

The half-length victory gave the team of trainer Wesley Ward and jockey Irad Ortiz Jr. a third consecutive win in this race that was first run in 2018.

Go Bears Go (12-1), an Ireland-based colt, finished second followed another half-length back by Kaufymaker (24-1), the winner’s stablemate, in third and Derrynane (10-1) in fourth. The favorite Averly Jane (9-5), also from the Ward barn, was fifth.

Win big on the Breeders' Cup. Get your Super Screener today.

Jockey Irad Ortiz Jr. brought Twilight Gleaming home with a winning time of 56.24 seconds for the five furlongs on firm turf. The early fractions were 21.61 and 44.03 seconds.

Bred in Ireland by Pier House Stud, the winner is a 2-year-old by National Defense. Sold for $88,100 at last year’s Goffs Orby sale in Ireland, Twilight Gleaming is owned by Barbara Banke’s Stonestreet Stable.

Twilight Gleaming broke her maiden on her second try with a victory in May at Belmont Park. In her most recent race before Friday, she won by a neck in the Prix de la Valle d’Auge at Deauville, France.

“I was really confident in this filly," Ward said. "I feel bad for the other two owners because we are all trying to win, but this filly, she had good spacing from her win in France and every work at Keeneland just kept getting better and better. She was coming into it just fresh and fit and ready to go and she did it."