Breeders’ Cup 2020: Prospective fields and odds for all 14 races 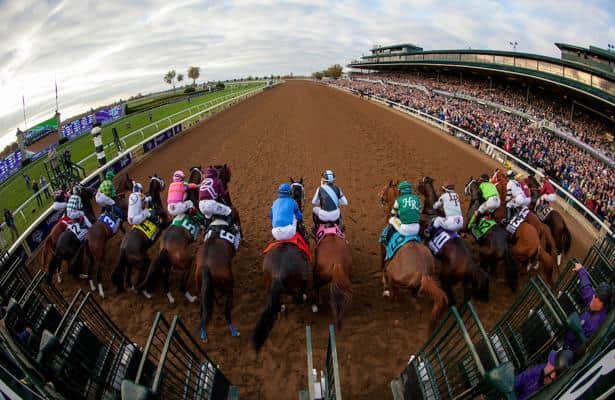 The 2020 Breeders' Cup will be light on fans but heavy on star power. This year's Classic has had a different early favorite every month for the last several months as Tom's d'Etat, Maximum Security, Improbable, Tiz the Law and Authentic each have had spectacular moments, vaulting them to the top throughout the year.

Below is a look at the prospective fields with our own morning-line odds for the Classic and all other Breeders' Cup races.

It should come as no surprise that Wesley Ward holds the keys to this year's Juvenile Turf Sprint. Ward's Golden Pal will be a heavy favorite in the Turf Sprint after a dominating performance in the Skidmore at Saratoga. A pair of Ward's top fillies, Royal Approval and Amanzi Yimpilo, have stakes credentials in their own rights and add to the depth of a field with no clear second choice.

Aidan O'Brien's Battleground and Todd Pletcher's Mutasaabeq are set to collide in the Juvenile Turf after impressive wins in their last starts. Gretzky the Great, Outadore, Public Sector and Fire at Will give the U.S. strong chances in this race, but the depth of this field hinges on the decisions of top Europeans St Mark's Basilica, Cadillac and New Mandate.

Four Grade 1 winners highlight a fantastic edition of the Juvenile Fillies. As many as five horses could win this race without anyone being surprised. The likely favorite is Bob Baffert's highly touted Princess Noor, who has dominated her overmatched foes in three starts, including the Del Mar Debutante (G1) and Chandelier (G2).

The top six or seven choices in the Juvenile Fillies Turf field all could be undefeated when they clash in this wide open affair. Brad Cox's Aunt Pearl likely will be a tepid choice off of her record-breaking performance in the Jessamine, but Ward's international star Campanelle and Christophe Clement's late-running Plum Ali are more than formidable opponents.

All eyes will be on Gamine as she returns to one-turn for the Filly & Mare Sprint. Can she produce the same powerhouse efforts that she did in the Test and the Acorn with the likes of Serengeti Empress breathing down on her every step of the way? The pace will be the key to this race, which features a nice mix of classy veterans and promising 3-year-olds.

With European star Battaash out, a course horse assumes the favorite's role. Leinster has won his last two starts, both Grade 2 races at Keeneland. If there is to be an upset, it very well could be a lady that follows in Belvoir Bay's footsteps. Got Stormy, Oleksandra and Kimari all have a strong chance to get the job done.

At this time, Complexity is likely to stay in the Dirt Mile, but Vekoma might point to the Sprint. The complexion of this race would change drastically if one or both of the likely favorites opt to go to the Sprint. Regardless, there are plenty of storylines worth following. Knicks Go and Mr. Money have regained their best form and will look to challenge Complexity, as will Art Collector, who is cutting back in distance after competing on the Triple Crown Trail.

Magical was not her usually stellar self in Saturday's Champion Stakes at Ascot, but her third-place finish should serve as a useful springboard to the Breeders' Cup. The seven-time Group 1 winner could take on the boys in the Turf, but if she runs in the Filly & Mare Turf, a fabulous showdown awaits between star American Rushing Fall and top Europeans Magical, Tarnawa and Cayenne Pepper.

George Weaver's Vekoma will be a handful if he winds up in the Sprint after his wins in the Carter and Met Mile. Despite losing Volatile, 2019 Sprint-winning trainer Steve Asmussen has a strong hand in here. The undefeated Yaupon looks like a future star, while romping allowance winner Nashville could be any type as well. Both of those runners would be giving up experience but could make up for it with tremendous upside.

The Breeders' Cup Mile lost the early favorite when European superstar Pinatubo unexpectedly retired. Though it would have been special to see such a great talent in the U.S., his defection has left this race as one of the best betting races of the Breeders' Cup. Two-time Group 1 winner Kameko likely will end up as the favorite, but Chad Brown's Uni and Digital Age and Peter Miller's Mo Forza have the class to hang with this top European.

Likely favorite Ghaiyyath was surprisingly retired on Monday morning, but the Europeans still have a strong hand in the Turf. Magical and Tarnawa are being considered for both the Turf and F&M Turf. Aidan O'Brien's Group 1 winner  Mogul is coming to the U.S. and could inherit the favorite role if the top top land elsewhere. The group of Americans are solid, but unspectacular, and certainly none of them have the talent of last year's winner and Horse of the Year Bricks and Mortar.

The 2020 Classic is shaping up to be one of the best editions of all time. It is filled with multiple Grade 1 winners from top to bottom, and many of these stars already have squared off. Maximum Security will look to get revenge on stablemate Improbable, while Tiz the Law will try to turn the tables on Authentic. The forgotten horse, Tom's d'Etat, fantastic filly Swiss Skydiver and undefeated Happy Saver are capable of hanging with the four mentioned above, giving this race great depth and star power.