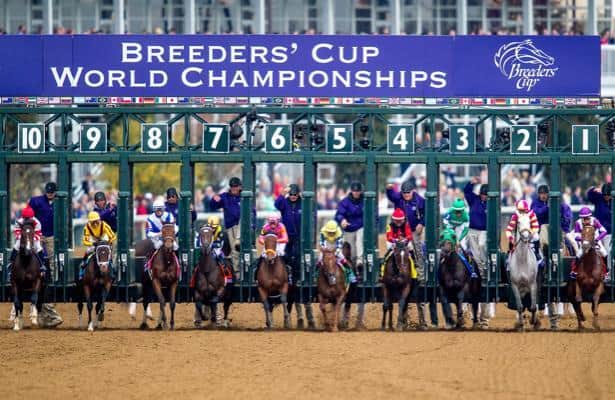 Pre-entires for the Breeders' Cup were submitted on Monday morning, and though they will not be released until Wednesday, the prospective fields for the 14 races are getting more clear by the day.

This year's event will not have as big of an international feel as usual as many of Europe's top contenders have bowed out, but most of this year's dirt races, including the Classic and Juvenile Fillies, look as deep and contentious as ever.

Below is a look at the latest field projections with our own morning-line odds for every Breeders' Cup race.

Wesley Ward's Golden Pal will battle Jackie's Warrior for the role of the biggest favorite on Friday. The impressive sprinter looks special in a division that lacks a clear second choice. Europeans have not fared well in Breeders' Cup Turf Sprints, and it will be interesting to see who they wind up sending.

Aidan O'Brien's Group 1 winner St Mark's Basilica is unlikely to make the trip to America, but O'Brien still could have the favorite in Group 2 winner Battleground. This will be one of the best betting races on the card as the favorite should be no lower than 7-2.

This compact field is full of star power as four Grade 1 winners square off. Princess Noor will be favored on the strength of her three effortless victories to begin her career, but she will be tested by those who have faced better competition, such as Simply Ravishing and Dayoutoftheoffice.

Brad Cox's Aunt Pearl will be a tepid choice off of her record-breaking performance in the Jessamine, but Wesley Ward's international star Campanelle and Christophe Clement's late-running Plum Ali are more than formidable opponents who will take plenty of wagering support as well.

The much-awaited showdown between Jackie's Warrior and Essential Quality got a little more interesting with Classier's impressive debut victory over the weekend. Trainer Bob Baffert confirmed to HRN that he would make the leap to the Juvenile for his next start.

Latest Defections: Hard Not to Love, Ce Ce, Sneaking Out

Gamine will be favored despite a wide array of opinions surrounding this talented filly. She has been spectacular in one-turn races, but two failed drug tests and a race full of speed will lead to plenty of doubters. If she falters, Bell's the One offers strong value as a closer who can pick up all the pieces.

With European star Battaash out and Diamond Oops opting for the Sprint, this race is as wide open as any Breeders' Cup race. Course specialist Leinster and multiple stakes winner Imprimis appear evenly matched as they take on a pair on talented ladies, Got Stormy and Oleksandra.

Vekoma, who would be the favorite in the Dirt Mile, is more likely to stick to one turn in the Sprint. If he bypasses this spot, Chad Brown's impressive Kelso winner Complexity would inherit the favorite's role. Art Collector and Knicks Go, who own fast victories over the Keeneland surface, will take plenty of support as well.

Star Europeans Tarnawa and Magical are both questionable for this spot as they could run in the Turf. Among those certain to run, Rushing Fall is the horse to beat. The world-class mare is as consistent as they come, and her only question mark is possible distance limitation. European Cayeene Pepper, Graham Motion's Mean Mary and former F&M Turf winner Sistercharlie all could play major roles in this stellar race as well.

Multiple G1 winner Vekoma likely will choose the Sprint over the Dirt Mile and will be a deserving favorite if he does. Steve Asmussen's dangerous trio of Yaupon, Nashville and Echo Town will look to challenge for the top spot. Peter Miller's C Z Rocket will try to keep his impressive winning streak going, and Patrick Biancone's Diamond Oops will try to duplicate his recent strong effort over this track.

The Breeders' Cup Mile took a hit when Pinatubo was retired earlier this month and lost another key runner when Mo Forza was withdrawn from consideration with a minor injury. The race gained a major contender when the connections of top European Siskin announced he would come to America for his final race. Siskin and other top Euro Kameko will battle for favoritism with the Chad Brown duo of Digital Age and defending champion Uni.

The Distaff field continues to get smaller by the week. The strength of the race now depends on Swiss Skydiver. A matchup between the Preakness winner and Monomoy Girl would bring excitement to this race. If Swiss Skydiver heads to the Classic, then Monomoy Girl will be the shortest-priced runner in the Breeders' Cup.

Aidan O'Brien's Mogul has been confirmed for the Turf, but the world awaits the decision on his seven-time Group 1 winner Magical. O'Brien's Japan and Serpentine are now unlikely to run, and Factor This from the Brad Cox barn will be pointed to the Mile. If Magical does not ship for the Breeders' Cup, then favoritism could go in a variety of directions. Mogul, Lord North and Tarnawa, who could run in the F&M Turf, all could vie for the leading role with the streaking Channel Maker.

Other than Swiss Skydiver's major decision between the Distaff and the Classic, the field for the marquee event appears set and it is one of the strongest groups in recent years. Improbable, Tiz the Law, Maximum Security, Authentic, Tom's d'Etat and Swiss Skydiver all have the credentials to win this race, and each horse has the tactical speed and versatility to work out a good trip. Those who take a stand will be rewarded as the favorite should be in the 7-2 to 4-1 range.