Breeder: Medina Spirit was the realization of a dream 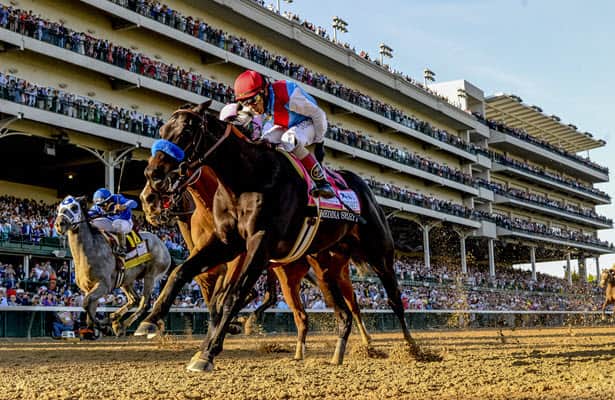 Gail Rice wondered whether she could keep the colt herself.

“I was thinking, he’s going to get too strong,” Rice told Horse Racing Nation Monday. “He was wanting to do this play-with-me stuff when he was little, and I was like ‘he’s big,’ and I think I need to sell him before I can’t handle him and then I teach him a bad habit.”

The Ocala, Fla., breeder was in possession of Medina Spirit, who would later blossom into the winner of the 2021 Kentucky Derby. After the decision not to hold onto him, she sent him to auction.

Once there, the Protonico colt out of Mongolian Changa, by Brilliant Speed, went for a paltry $1,000 to pinhooker Christy Whitman. Rice said she was surprised by that result.

Whitman turned around for the Ocala Breeders’ July 2020 2-year-olds and horses of racing age sale, when Medina Spirit went to Zedan Racing Stables for $35,000. The colt, who went on to finish first in the 2021 Kentucky Derby and second in the Breeders’ Cup Classic, died Monday at Santa Anita of an apparent heart attack after a work.

Rice said she was deeply saddened by Medina Spirit’s death.

“You could see it – when I saw him after the Breeders’ Cup, the horse had blossomed,” Rice said. “He was filling out, he was maturing. I was just really looking forward to his future.”

Rice always believed in the colt as he moved into the care of trainer Bob Baffert. Medina Spirit broke his maiden ondebut at Los Alamitos in December 2020.

To start his 3-year-old season, the colt finished second in the Sham (G3), before winning the Robert B. Lewis (G3). After runner-up effors in the San Felipe (G3) and the Santa Anita Derby (G1), it was on to Churchill Downs for the Kentucky Derby.

Before the Derby, the colt was overlooked, with even Baffert doubting he was the best horse in the race. But when the gate opened, Medina Spirit went straight to the lead under jockey John Velazquez and never looked back, winning the race at 12-1 odds.

Rice described her thoughts watching as the colt she bred completed the upset.

After the race, controversy began for Medina Spirit, who tested positive for 21 picograms of betamethasone. Baffert has claimed the positive test was because of a topical ointment used to treat a skin condition, rather than an injection, a claim seemingly supported by further testing.

Rice said she hoped that the cloud created by the positive test would not be the legacy of Medina Spirit, who went on to finish second in the Breeder’s Cup Classic. After that race, his drug test came back clear.

“His heart,” Rice said of her lasting memory of the colt. “It was the epitome of what we all wish and what we all want, why we’re in this business. Our passion is to see these horses run and the attitude in this horse, the fight and the big heart. … That’s what small breeders are here in this business for is to have that happen.”

Rice said she had coincidentally spent the day before Medina Spirit's death watching videos online of the colt's Derby victory.

"I always wanted to sell that million-dollar horse and I did – for $1,000. I just makes me laugh," Rice said. "... I go back and I watch these things and it's like the feeling is still inside of me and it gets rekindled. Every time somebody wants to talk about it, every time I see something about it. There's nothing like it. Today's another day, but that's never over for me. It's always there."