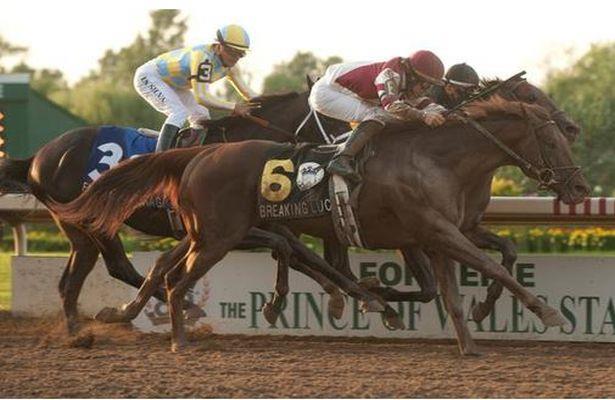 A field of nine, headlined by Prince of Wales champ Breaking Lucky, is entered for the third and final jewel, with each contender striving for an opportunity to be forever etched in the history books. Just like its U.S. counterpart, the Belmont Stakes, the Breeders’ is a test of endurance over a demanding 1 ½ miles.  What separates the Canadian Triple Crown from its American counterpart, a trio of dirt races, is a call for versatility.

Sunday’s  marathon over Woodbine’s E.P. Taylor Turf Course caps off a three-race series on three different surfaces starting with the 1 ¼-mile Queen’s Plate raced on the Woodbine ‘Poly’ which is followed by the 1 3/16-miles Prince of Wales Stakes, competed over the dirt at Fort Erie Racetrack.

It’s a challenge that now marks a 12 year crownless drought, dating back to Wando’s sweep in 2003.

A Canadian Triple Crown upset was yet again on the menu last month, as Gunpowder Farms’ Breaking Lucky, a rallying fifth in the Queen’s Plate, captured the 80th running of the Prince of Wales Stakes at Fort Erie Racetrack. Entering the starting gate at 13-1, the Reade Baker trainee attacked late with veteran rider Jim McAleney, edging out the Queen’s Plate winner and heavy favourite Shaman Ghost by a neck at the wire.

Breaking Lucky’s dominant run on July 28th came as no surprise to Baker, simply stating, “We were a bit too early in the Plate and were only beaten by four lengths. He’s been an improving horse. He never raced at two, so when he started late in the spring at Gulfstream, he got beat a long ways.”

The Sovereign Award-winning Baker added, “It takes some time to learn things and get along with things, so I was not at all discouraged with those starts.”

Sunday will mark Breaking Lucky’s career debut on the grass. He enters after a final prep on Woodbine’s dirt training track, going 1:03:00handily over five furlongs.

For this colt, Triple Crown upsets are a family affair. His sire, Lookin At Lucky, was a Preakness Stakes winner in 2010, many lengths the better of Kentucky Derby champ Super Saver.

Hall of Famer Roger Attfield sits at the top of the realm with eight career victories in the Breeders’ Stakes, last winning the event in 2009 with Charles Fipke’s Perfect Shower. Attfield and Fipke return on Sunday with Plate Trial winner, Danish Dynaformer. After breaking his maiden on Gulfstream’s turf in January, the colt has already proven his abilities on a variety of surfaces.

Entering the Breeders’ Stakes completes Danish Dynaformer’s trifecta of starts in all three Triple Crown Races, finishing a close second in the Queen’s Plate and sixth in the Prince of Wales. An impressive half-mile breeze of 47:2 marked his final prep on August 12th before saddling up this Sunday.

Mark Casse enters the Breeders’ Stakes with two of his highly talented individuals. Field of Courage will run for the iconic silks of owner John Oxley. With three wins in his six career starts, his most recent run was a third place finish to Shaman Ghost and Breaking Lucky in the July 28th Prince of Wales. Training on the turf on August 9th, the colt breezed a quick 59:3 over five furlongs. Field of Courage is a son of Marchfield, a two-time Sovereign Award and 2007 Breeders’ Stakes winner.

Casse’s second turf entrant is Conquest Stables’ Conquest Boogaloo. After a promising third place finish in the Queen’s Plate, the colt returned to the races at Fort Erie Racetrack, where he finished fifth in the Prince of Wales. As of August 13th, he has not posted a workout since he last ran on July 28th.  Conquest Boogaloo is out of Jules Best, a stakes placed turf mare.  Mark Casse seeks his second career win in the Breeders’ Stakes.

After sitting out of the Prince of Wales, trainer Daniel Vella returns to the Triple Crown with Ault. The B.C. bred has a strong turf pedigree. He is a son of English Channel, a multiple graded stakes grass winner, including the United Nations Stakes (g. I) and the 2007 Breeders’ Cup Turf (g. I). Ault is still searching for his first career victory, but has finished in the money in three of his four lifetime starts at Woodbine.

Take note that the Breeders’ Stakes is notorious for maiden upsets, the most recent being Miami Deco in 2010 who produced a record payoff winning at odds of 65-1 ($132.10 to win). Ault’s final work was a lengthy breeze on August 8th, posting a time of 1:14:4 over six furlongs. Ault runs for the silks of Canyon Farms, the owner of 2012 Queen’s Plate winner, Strait of Dover.

Lucky Lindy will make his first Triple Crown appearance this Sunday after a second-place finish in the July 26th Toronto Cup. A son of Harlan’s Holiday, he is trained by four-time Breeders’ Stakes winner Mark Frostad. Lucky Lindy enters Sunday’s event lightly raced, accounting for a maiden win in his four lifetime starts.  Running for Augustin Stable, the colt most recently worked on Woodbine’s Polytrack on August 8th. He posted 1:01:1 over a five furlong breeze.

Mike Doyle will saddle the Eaton Hall Farm homebred Samuel Dechamplain on Sunday. Following a maiden win in his two-year-old campaign, he returned with an encouraging second-place finish in the Summer Stakes (g.II) in his next start. It took the Henrythenavigator gelding nearly a year to return to the winners’ circle, as he ran to a half-length victory in the July 4th Charley Barley Stakes. His most recent start resulted in a seventh-place finish in the Toronto Cup to fellow Breeders’ Stakes participant, Lucky Lindy.

Stuart Simon and Chiefswood Stable return to the Canadian Triple Crown series with Portree. They sidelined the gelding for the Prince of Wales following Portree’s 11th place finish in the Queen’s Plate. The son of Niigon showed an abundance of promise in his starts prior. He finished fourth in the Plate Trial Stakes after winning two straight races (including his maiden) at the Ontario Sired level. On August 2nd, Portree took to the turf training track, where he impressed with a 58:4 breeze at five furlongs.  A win in the Breeders’ would be the very first for both Simon and Chiefswood Stables.

The 2015 Breeders’ Stakes will have two horses sired by Lookin At Lucky, as Olympic Bid ships north of the border for trainer Michael Matz. Olympic Bid is one of two maidens, along with Ault, entered in this year’s contest. His best result thus far was a second-place finish in a Delaware Park maiden allowance on June 8th. Most recently, the colt made a run on the Saratoga turf, finishing seventh in a 1 3/8-miles maiden allowance on July 26th. Before shipping north, Olympic Bid made his final prep at his home base at Fair Hill where he breezed a half mile in 49:2.

Also featured on Sunday’s card is the $200,000 Grade 2 Sky Classic Stakes, a 1 ¼-mile turf stakes for three-year-olds and upwards.  A talented six-horse field includes graded stakes winners Mr Speaker, Are You Kidding Me and Aldous Snow.

Attfield trainee Are You Kidding Me, a bay son of Run Away and Hide, arrives at the Sky Classic from consecutive scores in the Grade 2 Eclipse, a 1 1/16-mile ‘Poly’ tilt, and the Grade 2 Nijinsky Stakes, a 1 1/8-miles grass stake in which he defeated Sky Classic rival Golden Sabre by a ½-length. Alan Garcia retains the mount.

Sam-Son Farm homebred Aldous Snow, a bay son of Theatrical out of Brave Destiny, owns a solid record on the turf with five wins, three seconds and a third from 19 attempts. Last time out, Aldous Snow successfully defended his title in the grassy 1 ½-mile Grade 3 Singspiel Stakes under a prominent trip engineered by regular pilot Eurico Rosa da Silva.