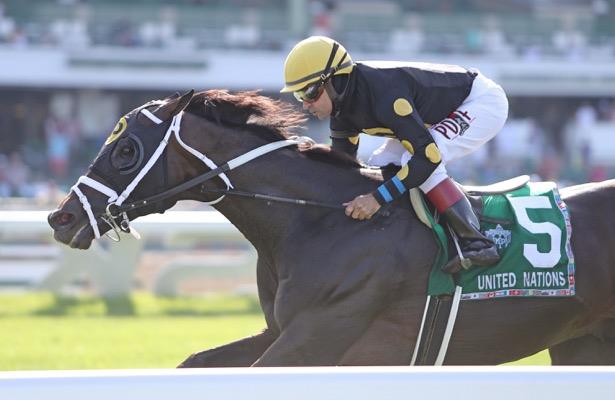 Aquaphobia, a 7-year-old Mike Maker trainee, made the United Nations his first graded triumph. It came in the son of Giant’s Causeway’s 36th career start.

Bravo, 48, meanwhile won the United Nations for the fifth time, with all those wins coming since 2012.

#5 Aquaphobia (10/1) gets bettors a price in the United Nations (G1) at Monmouthpic.twitter.com/J2CdyinAxM

Coming around the third turn, Bravo had Aquaphobia positioned comfortably along the rail behind the pace setter. Aquaphobia moved up just to the inside of Corelli entering the stretch, one length off Paret.

Once in the stretch, Bravo had the most horse left in the three-way battle. Aquaphobia pulled clear of Corelli, then passed Paret to score by a length.

“Joe Bravo rode him beautifully,” Maker said of Saturday's victory. “We had a lot of confidence in the horse coming in and he didn’t let us down. He’s run a mile and quarter in the past in he was successful, but he hasn’t had the opportunity to go that long or longer again. We felt this horse was better than we were getting out of him. I think the distance was the reason.

“He’d been training dynamite, so I was optimistic. Coming out of his last race, the Grade 2 Wise Dan (on June 20 at Churchill Downs), I thought that was a good race. He was beaten less than two lengths. So it looked like he was getting back to where we think he can be. He’s a classy, sound horse who makes it easy.”