Brant, Brown team up for Waya Stakes win with My Sister Nat 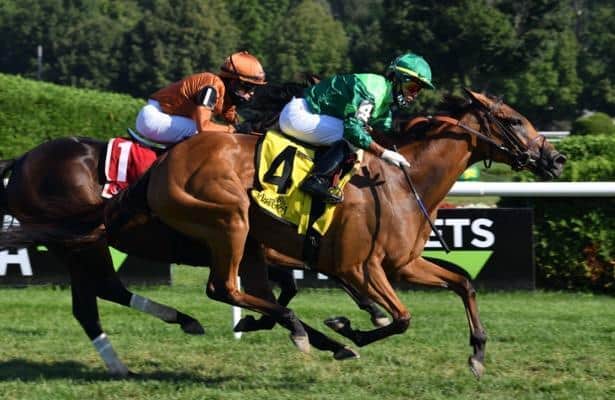 My Sister Nat tracked stablemate Fools Gold on Saturday before moving by and on to victory in Saratoga’s Grade 3, $150,000 Waya Stakes. The victory was the French-bred, 5-year-old mare’s first in six races since shifting from Europe to North America.

Fools Gold, the 2019 Waya winner, went out to the front Saturday in the 1½-mile, three-turn turf route for older fillies and mares. Under jockey Javier Castellano, the pace setter went through a half-mile in :50.72 and a mile in 1:41.76.

My Sister Nat came through the stretch three-wide with 7-5 favorite Mrs. Sippy just to her inside. Those two moved past Fools Gold, and then My Sister Nat and jockey Jose Ortiz beat the favorite by a half-length.

The Acclamation mare My Sister Nat, sent off as the 2-1 second choice, hit the wire in 2:30.26 for a win that returned $6.90. Graham Motion trainee Mrs. Sippy was second in her first start since last November’s Breeders’ Cup Filly and Mare Turf, while Fools Gold rounded out the trifecta.

My Sister Nat improved to 12: 3-4-3 lifetime. She made her North American debut last June at Belmont Park, and has raced on the New York circuit ever since.

"I have to thank Peter for keeping her in training," Brown said. "She's a half to Sistercharlie and it would have been easy to retire her. We found that last year it took all the way to the end of the year for her to really acclimate. We got her in a three-turn race at the end of the year in the Long Island at Aqueduct and she should have won but she got in a lot of trouble.

"In only her second three-turn race, we saw what she can do, and we're going to try and keep her in races like this."