Bran tries the downhill course in the Daytona Stakes 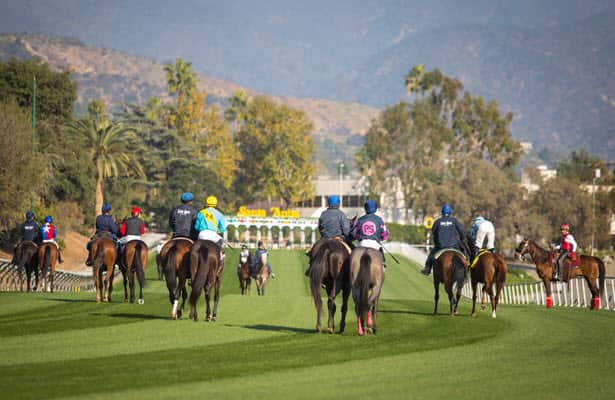 An ungraded stakes winner out of Santa Anita’s turf chute on April 10, Hronis Racing’s French-bred Bran tried the deep waters of Grade 2 competition at Churchill Downs May 6 and returns to Santa Anita as the likely favorite going about 6 1/2 furlongs down the hillside turf course in Sunday’s Grade 3, $100,000 Daytona Stakes, a race that has attracted six older horses.

Trained by John Sadler, Bran, a 4-year-old gelding, rallied to finish second, beaten 1 3/4 lengths in a field of 13 at odds of 40-1 in the Twin Spires Turf Sprint (G2) going 5 1/2 furlongs at Churchill, earning a career-best 94 Beyer Speed Figure, which followed a half length score in the April 10 Siren Lure Stakes here at Santa Anita.

Although he’s winless in two tries down Santa Anita’s unique hillside layout, Bran ran a solid second to multiple stakes winner Gregorian Chant over the course in a classified allowance three races back on March 25.

With leading man Juan Hernandez riding for the first time, Bran, who is 18: 5-4-3 overall with earnings of $286,392, will be seeking his first graded stakes win in the Daytona.

In what will be his first stakes assignment, trainer Dan Blacker’s streaking California-bred Burnin Turf, has won three consecutive races, the last two a pair of open company allowances over the course.

A 6-year-old Old English Rancho-bred gelding by Acclamation out of the Vronsky mare Hot Outta the Oven, Burnin Turf is owned by Next Wave Racing, LLC and the Ellwood Johnston Trust and will be ridden by Drayden Van Dyke, who is a perfect two for two with him. With an overall mark of 12: 5-0-4, Burnin Turf has earnings of $256,146.

Idle since running a close sixth in his U.S. debut going one mile on turf in the restricted Wickerr Stakes at Del Mar July 18, Homer Screen, a two-time graded stakes winner in Brazil, has five works on his tab for his return, four of them on Santa Anita’s inner training track, including a five furlong spin in 1:01.2 this past Sunday.

A 6-year-old full horse owned by Team Valor International, Homer Screen, who has five wins from seven overall starts, will be ridden back by Joe Bravo, who will no doubt hope to be rolling late.