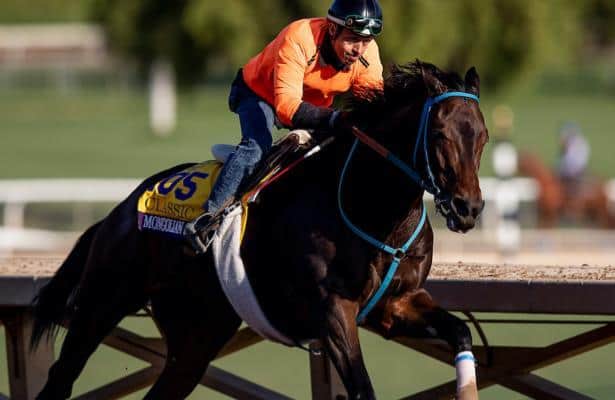 In a new report published Wednesday by the Breeders' Cup, the renowned Dr. Larry Bramlage said "there were opportunities to remove Mongolian Groom from competition" ahead of the Nov. 2 Breeders' Cup Classic that could have prevented the gelding's breakdown in the stretch at Santa Anita Park.

Rood and Riddle Equine Hospital’s Bramlage was immediately retained after the incident to conduct an evaluation of his pre-race condition and injury, as well as all safety protocols in place looking back to the 2019 Breeders' Cup.

The championships saw just one catastrophic injury from 229 horses to run in the Breeders' Cup, but Bramlage still found six suggested process improvements in his report -- read it in full below this story -- for future events.

Bramlage discovered that Mongolian Groom went into the Breeders' Cup with a pre-existing injury, a "fine stress fracture" in his left-hind distal cannon bone.

"In fact, he had small stress fractures in both hind cannon bones," the report states. "These fractures were in the depths of the bone, yet as of the start of the race had not caused any inflammation in the fetlock joint even though they were just millimeters away from the joint surface. A little more than one mile into the race the left hind fracture propagated, resulting in the chain of events, like dominoes falling, that created the fatal injury.

"There is no evidence that the horse’s injury was ignored or covered up. The stress fracture was the result of accumulated bruising of the distal cannon bone which resulted in the stress fracture. The horse was unaware it was even there during the race. As superior athletes can, his adrenaline levels wiped out any impediments to performance.

"He was well into the race, competing similarly to how he normally runs, just off of but near the lead. The race was one of the faster of the day and he was third as they exited the turn when the injury occurred. His jockey saw no reason for concern until the first fracture displaced."

The report also states that "there is no reason to believe medication played any role in the horse's injury."

Mongolian Groom was observed by five veterinarians in his lead up to the race, with Bramlage noting the number of examinations was above average.

In particular, an Oct. 31 note was made that Mongolian Groom appeared "questionable" on his left-hind.

"He was one of 110 Breeders’ Cup participant horses observed on the racetrack that day," the report states. "This gives the veterinarians very little time to do an assessment as there may be multiple horses passing by at the same time. The Breeders’ Cup horses are a minority of the horses training on the mornings before the Breeders’ Cup Championships; there are many other horses from the normal track population training on the track at the same time. That leaves little time to observe each horse critically beyond identifying it as a Breeders’ Cup participant, recording its number, and determining at which gait the horse is training."

Among Bramlage's recommendations is having consistency in the vets who monitor horses to note inconsistencies, as well as creating an "observation area" where Breeders' Cup contenders trot in their training in an attempt to discover any lameness.

"Since we are dealing with biologic beings and not inert machines, we will never eliminate every opportunity for an occult injury to manifest and will never reach 100% accuracy," the report concludes. "But improvement in process should make us better next year than this year and continual refinement should yield even better results the year after that. The process was good; it can be made a little better with some re-organization."

With the report below, click at the bottom right of the window to see a full screen version. If the embed isn't displaying, click here to read.

California racing board defends its embattled medical director
The California Horse Racing Board circled the wago...