Bradley was Waiting for Groupie Doll 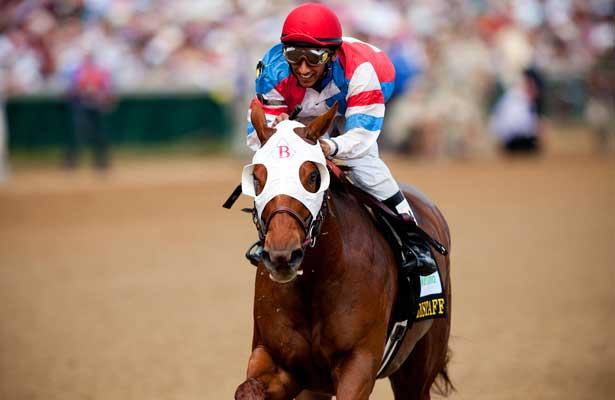 As he prepared Groupie Doll for her career finale in Sunday’s $200,000 Hurricane Bertie (G3) at Gulfstream Park Saturday morning, trainer Buff Bradley took a moment to look back at the first seconds of his two-time champion’s life.

“I remember, when she came out, telling Kim, ‘This is the one we’ve been waiting for out of this mare,’” Bradley recalled the moment he and his wife Kim got their first glimpse of Groupie Doll. “She was a big, red, good-looking filly. She was big from the very start. Kim will tell you that. She’d say, ‘Your first words were: ‘This is the one we’ve been waiting for.’ Not knowing that she was going to be a graded-stakes champion, but we wanted a good filly out of that mare, because I wanted to keep a good filly for the broodmare band.”

Bradley and his father, Fred, not only bred and foaled Groupie Doll, but they campaigned her in partnership with longtime clients William Hurst and Brent Burns during a career in which she earned $2.5 million. While watching Pope help out Saturday morning by giving her $3.1 million baby a sponge bath outside Barn 6 on the Gulfstream backstretch, Bradley was confident that Groupie Doll will be in good hands following her last race in the Hurricane Bertie.

“Now I can go down the road to see her and, hopefully, I’ll see some of her babies too. We’re excited, when she has babies, just to see those going,” said Bradley, who is planning to breed Groupie Doll’s half-sister, To the House, a 5-year-old mare by Brahms.Groupie Doll has one more order of business before embarking on her broodmare career, taking on six challengers in Sunday’s 6 ½-furlong sprint for fillies and mares. The 6-5 morning-line favorite drew the No. 1 post.

“It’s not what we wanted, obviously, but she was due to get a bad draw eventually. She’s been drawing well in the Breeders’ Cup and other races,” Bradley said. “I think her ability will overcome that. It’ll probably make it a little tougher for her.”

Groupie Doll will be challenged by Heart Stealer, the Marty Wolfson-trained winner of the Sugar Swirl (G3), as well as Grade 1stakes-placed Jamaican Smoke and Wildcat Lily in the field of seven.

“Anytime you sprint, everything’s got to break right. You want to get a good clean trip,” said Bradley, who has given the return mount aboard Groupie Doll to Rajiv Maragh. “We just hope it gets done. I’d be so happy for Groupie and Mandy.