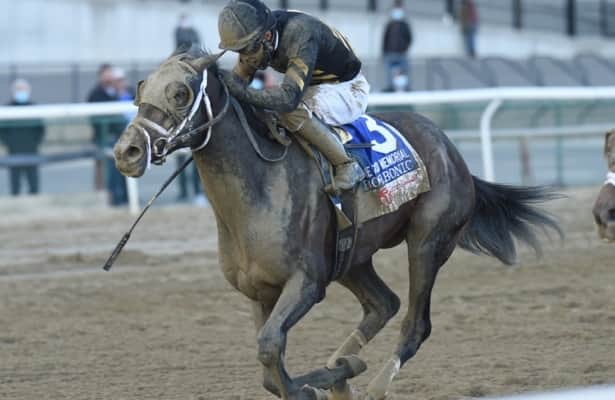 The victory capped a sensational day for the Pletcher barn, who successfully debuted promising New York-bred maiden Great Workout on the Wood Memorial undercard and also included a closing second from Haikal in the Excelsior (G3).

Bourbonic, a dark bay Bernardini colt, was sent to post as the longest shot on the board at 72-1 and topped an unlikely exacta over 15-1 stablemate Dynamic One that returned $453 for a $1 wager.

Patiently handled by Carmouche, Bourbonic closed from the last of nine to edge Dynamic One, who had made the lead at top of the lane after tracking the early foot of the prominent Gotham (G3) winner Weyburn.

“It was a very patient ride,” said Byron Hughes, the New York-based assistant for Pletcher. “That track often plays to frontrunners or horses closer to the pace. Yesterday, it was playing fair and there were some closers. He waited as long as he could and made one run and it paid off.”

A late bloomer, Bourbonic graduated at third asking in a $50,000 maiden claiming mile in December at the Big A and followed with a score against winners in January traveling a one-turn mile at Aqueduct. He entered the Wood Memorial from a runner-up effort in a mile and seventy yards optional-claiming tilt at Parx in February.

While many of the Pletcher-trained Kentucky Derby hopefuls wintered at Palm Beach Downs in Florida, Bourbonic remained with Hughes in New York. He said the added distance was beneficial for the improving dark bay.

“We always thought he wanted more distance, and two turns is something he needed,” said Hughes. “It was a good day for the team. He’s been a forward-training horse here. He loves to train and it’s been great to have him up here this winter.”

Dynamic One, owed by Repole Stable, Phipps Stable and St. Elias Stable, earned 40 Kentucky Derby qualifying points for his runner-up effort under Jose Ortiz. The Union Rags chestnut was piloted to a nine-furlong maiden victory in March by Carmouche at Aqueduct.

“He ran a game race,” said Hughes. “I was looking at the Trakus this morning and he actually ran 43 feet more than Bourbonic did. It was a game race and we were happy with his effort.”

Hughes said he was pleased with how both horses came out of the race.

“They both look good. They both ate up last night and are walking around here this morning with a purpose,” said Hughes.

“It was a big day for us at Keeneland too. Malathaat is undefeated and looked great doing it,” said Hughes.

Hughes said the barn is excited at their prospects for the Kentucky Derby slated for May 1 at Churchill Downs. They currently have four contenders on the leaderboard, including Florida Derby-winner Known Agenda (102 points), Bourbonic (100), Dynamic One (40) and Sainthood (40).

“It’s exciting. We went from not having any to having four in two weekends,” said Hughes. “These last shots paid off and the barn is excited for the Derby. All the hard work getting here at 4:30 in the morning, it pays off for everybody.”