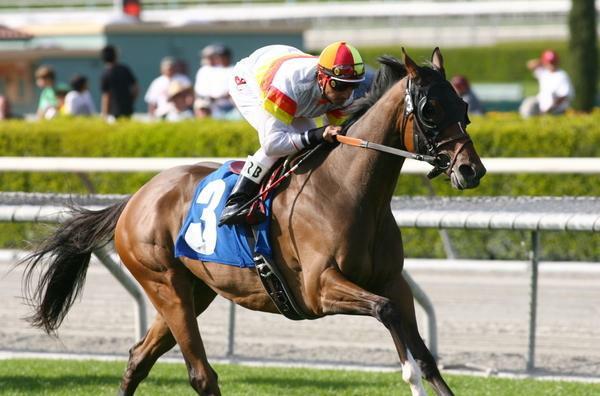 Classy Bourbon Bay, who has won seven of his nine starts over Santa Anita’s Camino Real Turf Course, returns to action for the first time since winning the Grade II San Juan Capistrano Handicap on April 22 in Sunday’s Grade II John Henry Turf Championship at 1 ¼ miles, a race that has attracted 10 turf veterans.

Ridden to consecutive victories by the now-departed Joel Rosario in his last two starts, the 6-year-old Sligo Bay gelding will get the services of Rafael Bejarano on Sunday. The Peruvian native has four wins from nine tries aboard Bourbon Bay.

Owned by David and Jill Heerensperger and trained by Hall of Famer Neil Drysdale, Bourbon Bay is stabled at Betfair Hollywood Park, but has two local turf works, the most recent a six furlong drill in a pedestrian 1:16.20 on Sept. 25.

Proven effective as both a deep closer and a horse that can sit mid-pack, Bourbon Bay has run well off the bench before, evidenced by his April 2010 win in the San Juan Capistrano, whereupon he was idle for six months prior to running third in the John Henry Turf Championship’s precursor, the Clement L. Hirsch, beaten just a length after sitting close to the pace.

Drysdale will also send out David Heerensperger’s Fire With Fire, who has good tactical speed as he pressed the pace, made the lead and ended up third, beaten 1 ¼ lengths in the Grade II, 1 3/8 miles (turf) Del Mar Handicap Aug. 25.

Trainer Todd Pletcher and New Jersey-based jockey “Jersey Joe” Bravo will team up with the speedy Turbo Compressor, who prior to running ninth and last in the Grade I Sword Dancer at Saratoga Aug. 18, was a gate to wire winner of the Grade I United Nations Stakes July 7 at Monmouth Park.

Pletcher, a five-time Eclipse Award winning trainer, had 180 wins from 655 starters at the time of entry, good for a 27 percent win clip in 2012.

Trainer Ron Ellis has a “now” commodity in Casino Host, a 4-year-old colt by Dynaformer who exits a hard-fought win in the Del Mar Handicap. Joe Talamo, who orchestrated Casino Host’s furious stretch rally, will be back aboard in the John Henry.

Casino Host is owned by Gary and Mary West and will be making his first start on the Santa Anita lawn Sunday. His career record is 15-4-3-2, with earnings of $575,175.

Slim Shadey, idle since a disappointing run in the Grade I Eddie Read Stakes at Del Mar July 21, retains the services of jockey Garret Gomez and should run well fresh. Two weeks prior to the Read, the Simon Callaghan trainee was fifth, beaten 4 ¾ lengths by Turbo Compressor in the July 7 United Nations.

Callaghan has since acknowledged that “Slim” didn’t have enough time between the two races and was “flat” in the Eddie Read.

Trainer Marty Jones will send out the 6-year-old Grassy, a turf marathoner who closed ground from off the pace in his Southern California debut, a conditioned allowance race going 1 1/16 miles on turf Aug 30 at Del Mar. The 6-year-old by El Prado was likely in need of the race, as he hadn’t started since running fourth in the Grade II Red Smith on Nov. 11, 2011, at Aqueduct.

Owned by Button Stable, George Hicker and Jones, Grassy will be ridden by Alonso Quinonez. His lifetime record, all on turf, is 18-5-3-3, with $474,624 in earnings.