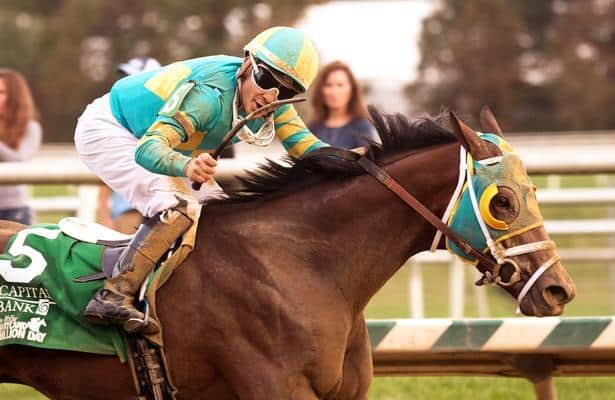 Swinging wide into the home stretch, Bonus Points rallied down the center of the track Saturday to win the $150,000 Maryland Million Classic Stakes at Laurel Park, giving jockey Nik Juarez, who is from Maryland, his third win on the card.

Juarez turned his mount loose in the final turn, and the pair circled the field while moving 2 3/4 lengths clear at the wire.

“I spoke to [trainer] Todd [Pletcher] this morning. The horse is very versatile, can run on the lead, can come off,” Juarez said. “So there’s plenty of speed inside me and that’s just how it set up. I was able to sit behind them, let them do their thing, and when it was time to run I had much the best underneath me.”

Horses jostled for position at the start of the 1 1/8-mile race, with Admirals War Chest ultimately winning the break. Jerandson was on the outside in second, with favorite John Jones along the rail. Bonus Points relaxed toward the back of the 11-horse field while the others fought for position. As Admirals War Chest opened up the first quarter in :23.53, Jerandson was pulled up out of the race.

Admirals War Chest continued to lead the field through a half-mile in :47.83 before John Jones took command on the inside. Three-quarters went in 1:12.74 and John Jones was hugging the rail, trying to maintain his lead. Ghost Bay and Southside Warrior moved up to his outside to challenge, but Bonus Points was moving best of all.

Southside Warrior was able to hang on through a mile in 1:38.08, but it was all Bonus Points from there.

Bred in Maryland, Bonus Points is by Majestic Warrior and out of Baby Love, by Not For Love. His homecoming in the Maryland Million Classic improved his record to 14-3-3-2. Trained by Pletcher, Bonus Points has earned $340,650 for Three Diamonds Farm.

Earlier on the Maryland Million card, Juarez also won aboard Clever Mind and Spartianos. Clever Mind made his race debut in the Nursery Stakes and rallied to a two-length win, and Spartianos went gate to wire in the Turf Stakes.

“It’s special. It’s really great to come back home and just to be back here for a day like this, but to win three is even better,” Juarez said the Classic. “I’m just very thankful.

“Two of my wrestling buddies, we were all wrestling partners in high school, they came out. My best friend since we were 6 years old, he came out, so it was very, very nice. It was nice to have them out here and of course my dad, as well.”

Other Maryland Million winners include Blu Moon Ace in the Sprint Handicap, Limited View in the Lassie Stakes, My Sistersledge in the Ladies Stakes, and the popular Maryland filly Crabcakes in the Distaff Handicap.