Bolo's comeback 'a labor of love' for trainer Carla Gaines 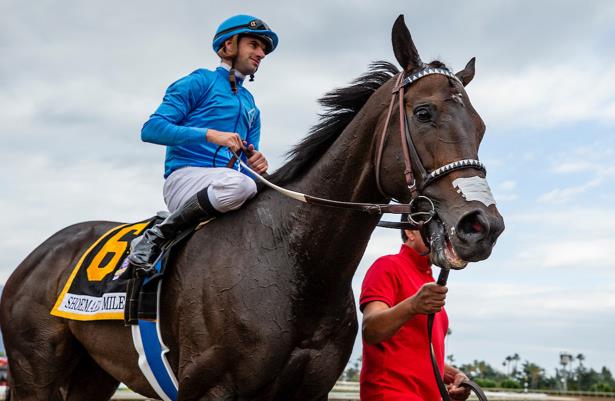 There was the first stage in late 2014 and early ’15, when the son of Temple City hit the Kentucky Derby trail and took his connections to Churchill Downs the first Saturday in May.

Then there was a second act, when Bolo developed into a formidable turf horse.

And then came a long third stage, when Bolo missed almost two whole years of racing due to a soft tissue injury.

Now for his fourth act, a healthy Bolo is back healthy, and maybe better than ever.

The 7-year-old gelding notched his first career Grade 1 win on Memorial Day at Santa Anita Park in the Shoemaker Mile Stakes, leading gate to wire as a 33-1 shot.

Bolo’s May 27 triumph was trainer Carla Gaines’ first in Grade 1 company since Dancing In Silks won the Breeders’ Cup Sprint back in 2009.

“He’s so resilient,” Gaines said of Bolo, “and he came back with that killer instinct.”

Bolo was bred in Kentucky by Spendthrift Farm and came into Gaines’ care as a 2-year-old in 2014. He’s campaigned by Golden Pegasus Racing Inc., a group which includes Keith Brackpool, a former Santa Anita executive for The Stronach Group.

“He was an exciting 2-year-old and just a really kind horse until he started getting in shape,” Gaines said of Bolo. “And after a race or two, then his (grand-sire) Dynaformer line started coming out in him, and he was very tough.”

Bolo won two starts his freshman campaign, and his ownership decided to try for the Kentucky Derby. He ran third in both the San Felipe Stakes (G2) and Santa Anita Derby (G1), giving him enough points for a trip to Louisville, Ky.

“It was a situation where the ownership group, they were very excited we had enough points to go to the Derby,” Gaines said. “I personally wanted to stay on the grass. But you can’t fight city hall and you can’t (pass up) that opportunity.”

After that, Bolo switched back to the turf and found his groove. He won the 2016 Arcadia Stakes (G2) over the Santa Anita turf as a 4-year-old, then returned in February 2017 and repeated as the event’s winner.

Bolo ran four more races as a 5-year-old before he was sidelined with an injury.

“He had a small – but they’re all significant – lesion in a tendon,” Gaines said.

At that point, Bolo’s connections had decisions to make.

“There was some interest at standing him at stud in Japan or Argentina after his injury,” Gaines said. “He was an older horse. He’d done everything. …

“Some of my friends at Spendthrift sort of encouraged me to look in another direction because if they don’t turn out to be a good stallion in some of those places, sometimes their life isn’t that great.

Ownership sent Bolo to a California farm, where he received care from veterinarians who specialize in his type of ailment. Bolo was also gelded during his time away from the track.

“The last time we scanned him, there was no evidence anything had ever been wrong with his tendon,” Gaines said. “If you look at him, you wouldn’t even be able to tell. Then we just preceded to start with a long process of getting him back.

“I said, ‘Keith, these things don’t always turn out the way you plan,’ even though we’d taken the time out and spent the money. He said, ‘I don’t care.’ He left me alone, ‘Take as long as you want and let me know when he’s ready to run.’”

After training to get back in racing form, Bolo finally returned to the starting gate April 28 in a 1 1/8-mile allowance optional claiming event at Santa Anita. In his first start since June 3, 2017, Bolo set the pace but was passed in the stretch and finished fifth.

“A mile and an eighth is probably a little further than he wants to run, and they just got to him inside the sixteenth pole,” Gaines said. “I said, ‘He’s back.’”

So Bolo’s connections entered the 7-year-old in the Shoemaker Mile, a $500,000 showcase for 3-year-olds and up.

Four-time graded stakes winner Sharp Samurai went off the 2-1 favorite in the nine-horse race. Meanwhile, at 33-1 Bolo was the second-longest shot in the field ahead of only 94-1 underdog Le Ken.

“He’s in the paddock and he’s a statue,” Gaines said of Bolo. “He didn’t move.

“Before, we’re all like getting knocked around and he’s leaping around. His eyes -- he had this fierce look in his eyes.”

As Bolo’s rivals jostled for position behind him, the veteran maintained his steady lead.

With the Shoemaker Mile including a "Win and You're In" spot for the Breeders' Cup Mile, Gaines said she’s still determining Bolo’s next step. Options include the July 21 Eddie Read Stakes (G2) and Aug. 18 Del Mar Mile (G2), both at Del Mar.

Those races present Bolo more chances to build on the fourth act of a decorated racing career.

“We went to the Derby with him and he’s part of the family, if you will,” Gaines said. “It was such a labor of love to get him back. It means the world to all of us.”

Megan Devine contributed to this report.