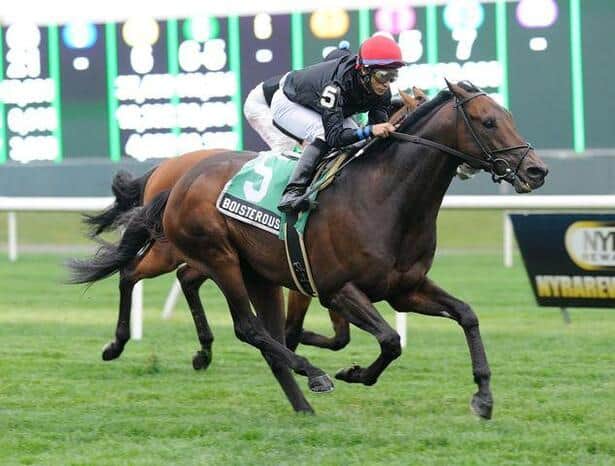 Phipps Stable's Boisterous, third in the Grade I Manhattan Handicap in New York on the Belmont Stakes undercard, has accepted high impost of 122 pounds as he heads a field of 11 turf specialists entered for Saturday's Grade III $200,000 Arlington Handicap.

A 5-year-old son of Distorted Humor, Boisterous had previously won the Grade III Fort March Stakes at Belmont in May as well as capturing last November's Grade II Red Smith Handicap at Aqueduct and the Grade III Knickerbocker at Belmont in Oct. 2011.

The Shug McGaughey-trained horse is an accomplished turf winner with seven victories in 14 starts and earnings in excess of a half-million dollars on the green. Alan Garcia is slated to ride.

Robert Courtney Jr.'s Rahystrada, winner of the 2010 edition of this race, returns to Arlington after a third-place run in the $500,000 Colonial Turf Cup in Virginia last month. The son of Rahy won that race last year and followed that up with a fifth-place finish in Arlington Million XXIX last August. Since that time, the Scooter Hughes trainee captured the Grade III Kentucky Cup Turf at Kentucky Downs last September. Joel Rosario picks up the mount aboard the 8-year-old gelding who will carry 120 pounds Saturday.

Lothenbach Stables' Mister Marti Gras returns to home base after taking his act on the road through his first four starts of 2012 – the best of which being a second-place finish in the Grade III Eclipse Stakes at Woodbine Race Course near Toronto. The Chris Block-trained son of Belong to Me was runner-up in this race last year and then followed that up with a victory over Polytrack in the Grade III Washington Park Handicap. Shaun Bridgmohan will make up most of the 118 pounds assigned to Mister Marti Gras.