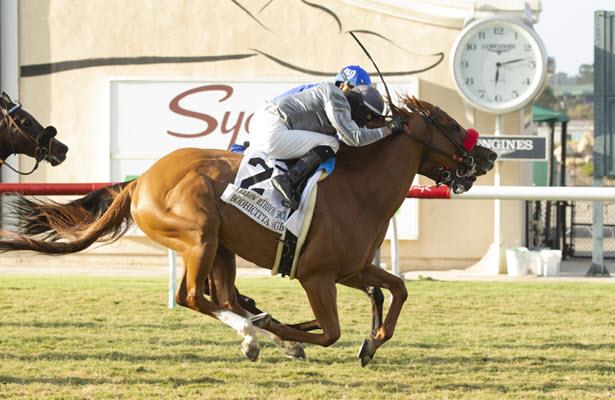 Bodhicitta and Flavien Prat came from off the pace and ran down longshot Tonahutu in the final stride to score a first graded stakes win under a well-timed ride in Saturday's $150,000 Yellow Ribbon Stakes (G2) at Del Mar.

Bodhicitta, who was exiting a runner-up finish to Yellow Ribbon rival Keeperof the Stars in the Grade 1 Gamely on May 25 at Santa Anita, was content to race in mid-pack while saving ground as 30-1 longshot Harmless carved mild opening fractions of :24.52, :49.97 and 1:14.58 for six furlongs with Tonahutu pressing the pace.

Tonahutu and Victor Espinoza got first jump on the pacesetter entering the stretch and surged to the front at the eighth pole, but rolling down the middle of the course came Bodhicitta, who after a couple right-handed cracks and vigorous hand ride just got up in the final stride to win by a nose. Tonahutu was followed across the wire by Harmless and Lady Prancelot. Defending champion Beau Recall, who shipped west for trainer Brad Cox and was made the 6/5 favorite, was never a factor.

Bodhicitta paid $11.20 as the 9/2 second choice. For Prat, it was his eighth stakes win through the first 12 days of racing at Del Mar.

"I had a good post (No. 2) today, so I was able to get right on the fence and save ground. I knew they were going slow, but my filly has a good turn of foot and we got it done.”

Trained by Richard Baltas, Bodhicitta was brought to the U.S. from Ireland last summer by owner Calvin Nguyen. She won back-to-back allowance races at Del Mar to kick off this season prior to her runner-up at 14-1 in the Gamely.

“The race went about like I thought it would, I didn’t see much speed in the race," Baltas said. "She has more tactical speed than some of the horses, like Beau Recall and others who come from the back. He (Prat) saved a lot of ground and we needed all of it."

Bred in Great Britain, Bodhicitta is by Showcasing out of the Teofilo mare Solfilia. Baltas said a start in the $150,000 John C. Mabee (G2) on Sept. 5 could be in the cards for Bodhicitta.

"When [Prat] won with her awhile back, Baltas said ‘This is my next (multiple-stakes winner) Vasilika,'" Baltas said. "It means a lot because he’s ridden a lot of good horses. We may go [in the Mabee]."