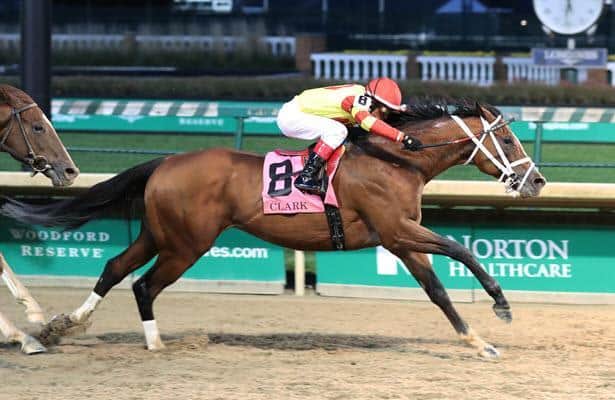 Bodexpress, who had been best-known for dumping Hall of Famer John Velazquez at the start of last year's Preakness Stakes, took his career to new heights on Friday when fending off favored Code of Honor in the stretch to win the Grade 1, $500,000 Clark Stakes at Churchill Downs.

Bodexpress -- whose three previous career wins all came going gate-to-wire at Gulfstream Park West-- failed to get the early lead as 99-1 shot Phantom Currency and Declan Cannon were intent on making the front. After an opening quarter mile in 23:39, Bodexpress was eased to the outside by Rafael Bejarano and commenced to press the leader through a half mile in 47.93 and six furlongs in 1:12.77.

Rounding the second turn, Bodexpress ranged up to Phantom Currency and made it three in a line on the front as Mr. Freeze had made his way forward along the rail. From there it was a quarter-mile sprint to the wire. Bodexpress first put away a tiring Mr. Freeze and then comfortably held off a late rally by Code of Honor to earn his first stakes win by one length.

Trained by Gustavo Delgado, Bodexpress completed 1 1/8 miles in 1:49.12 while rewarding backers with a $25.40 win mutuel. Code of Honor was followed across the wire by Owendale and Coastal Defense.

This is Delgado's first win in the Clark and Bejarano's second.

“This horse just showed so much run today,” Bejarano said. “I’m so proud of him. (Phantom Currency) was going so fast on the lead and we were able to sit a really good trip just behind him. He relaxed very nicely for me and turning for home I could feel I still had a lot of horse underneath me. He had a lot of energy in deep stretch when we needed it to hold off the rest of the horses.

"It’s very special winning a race like this returning to Kentucky to ride this year," Bejarano continued. "This is my home and we’ve had a lot of success here in my career. This was very special.”

Velazquez, who rode Code of Honor, noted quarters got tight for the favorite entering the stretch.

"We got into a good spot on the backstretch in between horses. We were chasing the speed of (Phantom Currency) and turning for home we didn’t have a lot of room," Velazquez said. "When I finally got a spot to run around the eighth pole, (Bodexpress) kept going and we weren’t able to catch him.”

Owned by Top Racing, Global Thoroughbreds and GDS Racing, Bodexpress improves 17: 4-4-3 with earnings approaching $700,000. The 4-year-old son of Bodemeister was exiting a runoff victory by 11 lengths against allowance company at Gulfstream Park West on Oct. 17.

Bodexpress earned entry into last year's Triple Crown when running second in the Florida Derby. After finishing 13th in the Kentucky Derby, he dropped Velazquez at the gate in the Preakness and completed the trip without a rider, gaining a bit of internet fame in the process.

“This is a different horse than we saw last year during the Triple Crown campaign,” said Gustavo Delgado Jr., who was on hand to saddle Bodexpress for his father. “He’s really matured. Turning for home I thought we had a really good shot.

"The horse deserves this most of all," Delgado added. "I’m very happy for everyone involved but we are so happy for Bodexpress.”

A return trip to the Pegasus World Cup in late January is likely next for Bodexpress, according to Delgado. This year, he finished fifth in the Gulfstream Park Grade 1.