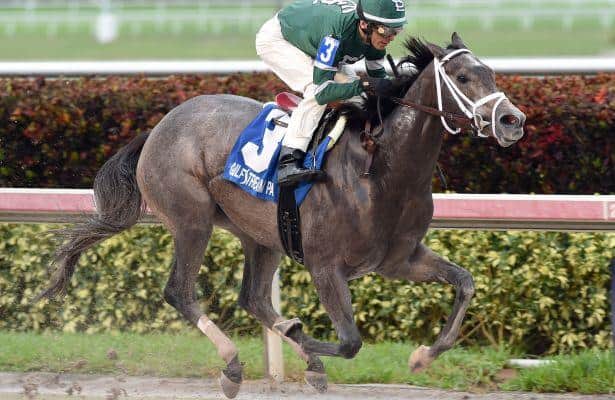 Photo: Lauren King
St. Elias Stable’s Bode’s Dream is slated to seek her fourth career victory without a loss in Saturday’s $100,000 Old Hat, a six-furlong sprint for 3-year-old fillies on a four-stakes card that will offer the $100,000 Palm Beach (G3), $100,000 Mucho Macho Man and the $100,000 Ginger Brew.
The daughter of Bodemeister returned from a six-month layoff to win the House Party Stakes at Gulfstream by 2 ¾ lengths. Trained by Todd Pletcher, Bode’s Dream broke her maiden at first asking by 3 ¾ lengths at Gulfstream in May
“She’s been very straightforward. She’s broke well and run well every time. Hopefully, she can continue on that path,” trainer Todd Pletcher said.
Hall of Fame jockey John Velazquez has the return mount aboard the undefeated filly.
“We’ll take it one step at a time. The plan would be to run here and see how things go and possibly run in the Forward Gal [G2; seven furlongs; Feb. 4] after that. We’ll keep stretching her out as long as she tells us to,” said Pletcher, who also entered recent maiden winner Sand Shark in the Old Hat.

Also entered in the 40th running of the Old Hat: Wildcat Kate, the House Party runner-up; Sister Nation, the runner-up in the Glorious Song Stakes at Woodbine last time out; Atenea, who is slated to make her U.S. debut after winning her two career starts in Ecuador by a combined 24 ¾ lengths; Sailor’s Valentine, an allowance runner-up at Churchill Downs last time out; and Summer Luck, an impressive maiden winner at Churchill in her juvenile finale.