Bocachica explains how things lined up for his 8-win night 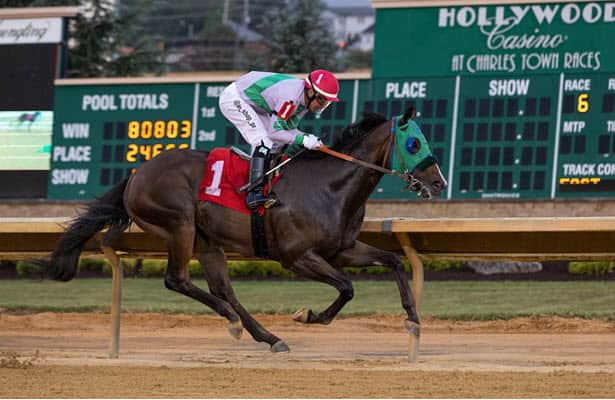 The list of jockeys who have won at least eight races on one Thoroughbred card is understandably thin – and undeniably eclectic.

Pat Day did it first at Arlington Park in 1989, at least according to an hour-long research dive into internet. In 2002, Yutaka Take was the first to do it in his native Japan, 14 years before Christophe Lemaire also did it at Tokyo Racecourse. Eddie Castro actually won nine times in one day at Calder in 2005. Brazil star João Moreira hung a pair of eights, in Singapore in 2013 and Hong Kong in 2017.

Then came Saturday, when Arnaldo Bocachica, 34, a native of Carolina, Puerto Rico, put his own twist on it. Not only did he win eight of the nine races he rode at Charles Town that night, he appeared to be the first to achieve that rarity in nothing but stakes races.

“The best day I had before that was three stakes in one day,” Bocachica said in a telephone conversation Monday afternoon with Horse Racing Nation. “I won five races that night.”

That was nothing like Saturday, when Bocachica won the first and second races and finished fourth in the third. And then he won the rest, including the West Virginia Breeders’ Classic aboard odds-on Muad’dib to get him to seven wins. Finally the even-money favorite Stowe Angel stormed to victory in the finale, bringing up No. 8.

Bocachica was blessed with seven favorites; only 9-1 long shot The Sky Is Falling in the second race delivered him an upset victory. But he has seen and lived the statistics that say favorites lose more than 60 percent of the time.

“You can have the best horse, but when the gate opens your horse can stumble,” he said. “He can break last. Somebody can bump you. You can be on the inside and never be able to get out. Or the other way. You can be stuck wide, and you lose a lot of ground. Something can happen to the horse. He can bleed. He can be sick. Or he just doesn’t want to try that day. Everything has to be right for you to win, so it’s not that easy.”

Erich Zimny, the vice president of operations at Charles Town, doubled down on Twitter, saying “if you took the percentage of the win pool bet on his mounts as the probability of (Bocachica) winning each race, the chances of him winning eight or more was about 0.3 percent, or 333-1. Absolutely incredible accomplishment.”

If luck was an ingredient on Bocachica’s big night, one man’s good fortune was another man’s tough break. Denis Araujo, who regularly rides the filly Door Buster, missed Saturday’s assignment in the fifth race. Since that part of Bocachica’s card was open, he got the call from trainer Ollie Figgins.

“I want to say thank you to Ollie, too,” Bocachica said. “He could have picked any jockey to ride this horse. The jockey that usually rides the horse, he got hurt and broke his collarbone, so they gave me the opportunity to ride the filly.”

Seven of Bocachica’s victories Saturday night were for Charles Town’s leading trainer Jeff Runco, giving him a track record, too. David Raim was the owner for five of the winners.

The partnership of Runco and Bocachica has been formidable. Runco has 107 victories this year, 101 of them at Charles Town. Bocachica has 190 wins from 584 starts for a strike rate of 32.5 percent. Of all the North American jockeys with at least 500 starts in 2021, Bocachica’s success rate is second only to Juan Díaz, who is winning at a rate of 35.5 percentage.

“Mr. Runco and the people that work for him have all his horses ready all year,” said Bocachica, who is well on his way to a fourth consecutive Charles Town riding title. “Every day he gives me the opportunity. My best horses are the ones I ride for him. I’m just thankful to be working for a trainer who is able to have the best horses, and he trusts me to be the one to ride them.”

“I came here because my first agent brought me here,” said Bocachica, referring to the late Joe Mascolo, also his father-in-law who died five years ago. “I stayed here because I was doing very good. The people from West Virginia love horse racing, they go to the track, and they just love it.”

Now that he has put himself in the rare air of the half-dozen jockeys who have won eight races on the same card, Bocachica could be excused for entertaining some wanderlust and moving his tack to a bigger colony.

“As of right now, I don’t have any plans to go anywhere,” he said. “I would like to in the future, if I have the opportunity to go to a bigger track.”

Although he has put down roots at Charles Town, his family has been scattered lately. His wife and his son, who is in jockey school, are in Puerto Rico. His daughter, mother and sister live in Florida.

“They were all watching Saturday night,” he said.

His fellow jockeys were paying attention, too, and they let Bocachica hear it with a good-natured bite in their words.

Bocachica just kept going about his business the way Day and Take and Lemaire did on their special days. Like Castro and Moreira and Moreira again. He just had to remind his rivals.

“Like I told them,” Bocachica said, “I’m just doing my job.”