Bobby Flay buys into Belmont contender We the People 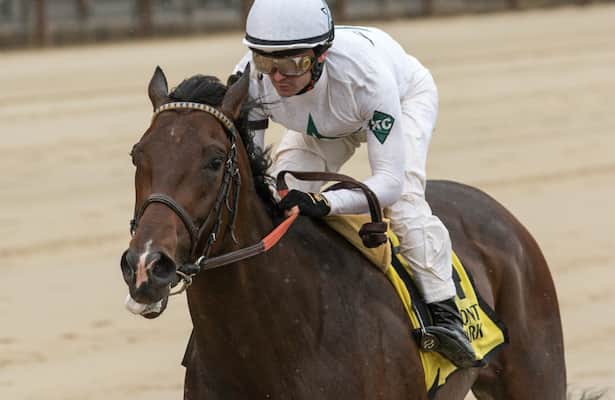 Celebrity chef and restaurant owner Bobby Flay has acquired an interest in Belmont Stakes contender We the People, the 10 1/4-length winner of the Peter Pan Stakes (G3) in his most recent start. Flay joined the ownership group that includes WinStar Farm, CMNWLTH and Siena Farm.

Flay previously had partnered with WinStar in Creator, who he bought into shortly before the 2017 Belmont Stakes. Creator went on to win that race by a nose. In partnership with Siena Farm and other partners, Flay also owns a share in 2022 Pimlico Special (G3) winner First Captain.

In addition to owning horses in partnerships, Flay also owns and breeds horses on his own. His homebred Pizza Bianca won the 2021 Breeders' Cup Juvenile Fillies Turf and most recently won the Hilltop Stakes at Pimlico on May 20. Flay's other graded-stakes winners include 2010 Breeders' Cup Juvenile Fillies Turf (G2) winner More Than Real and 2015 Turn Back the Alarm (G3) winner America.

Asked last week about his Belmont Stakes thoughts in a conversation for Friday’s Ron Flatter Racing Pod, Flay said, “I think We the People is in very good form. I have been watching him really since February. I think he’s crazy talented.”

“I’m thrilled to join the We the People team,” Flay said in a news release after joining the partnership. “I want to thank Lisa and Kenny Troutt of WinStar for giving me this exciting opportunity. Winning the 2016 Belmont with Creator will be a moment that me and my family will never forget.”

WinStar president, CEO and racing manager Elliott Walden said, “We appreciate Bobby wanting to partner with us again. He is great for the business and a great partner.”

Trained by Rodolphe Brisset, We the People was ridden by Flavien Prat for his victory in the Peter Pan and is expected to partner with Prat again in the Belmont. He broke his maiden by 5 3/4 lengths at Oaklawn Park in his career debut Feb. 12, then followed that up with a five-length allowance win March 12 at Oaklawn. We the People finished seventh behind Cyberknife in the April 2 Arkansas Derby (G1), his graded stakes debut, before returning to winning form in the Peter Pan.

We the People was bred in Kentucky by Henley Farms Inc. WinStar bought the colt for $230,000 at the 2021 Fasig-Tipton Gulfstream sale. The 3-year-old colt by Constitution is out of the Tiznow mare Letchworth, a half sister to 2011 Shakertown (G3) winner Stratford Hill and Grade 2-placed Armistice Day. This is also the family of 2003 Ballerina (G1) winner Harmony Lodge and Arkansas Derby (G1) winners Graeme Hall and Magnum Moon.

We the People turned in his final work ahead of the 1 1/2-mile Belmont Stakes, the final leg of the Triple Crown, breezing four furlongs in 47.59 seconds on Saturday at Belmont Park.