Blue Stripe is back in Breeders' Cup after Clement L. Hirsch win 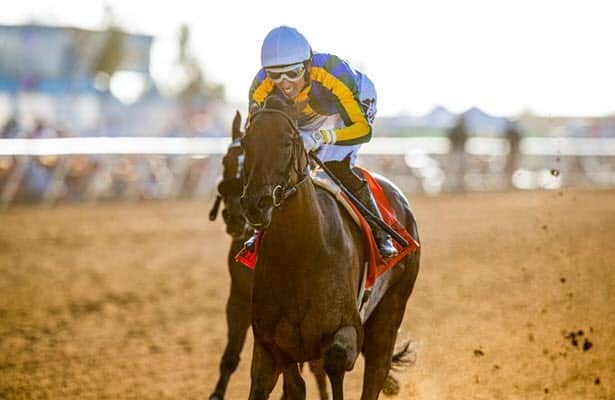 The South American mare Blue Stripe tracked a pair of leaders early, then went on by at the head of the stretch to register and impressive 1 3/4-length triumph in the Grade 1, $400,000 Clement L. Hirsch Saturday at Del Mar.

Click here for Del Mar entries and results
The 5-year-old by the Argentinian stallion Equal Stripes out of an Argentinian mare named Blues for Sale ran the 1 1/16-miles on dirt in 1:42.97 under jockey Hector Berrios. She now shows two firsts and a second this year in stakes company under the training of Marcelo Polanco after she failed to make a dent in the Breeders’ Cup Distaff field last November at Del Mar.

Blue Stripe & @HIBerrios turn the pressure on and score the upset in the @BreedersCup WAYI GI Clement L Hirsch. pic.twitter.com/qrvfSBQAff


Finishing second in the headliner was H & E Ranch’s Desert Dawn, who closed late to prove a head better than the race favorite, Flurry Racing Stables, et al’s Shedaresthedevil, who went off at 4-5.

By winning the Hirsch, Blue Stripe becomes a “win and you’re in” victress and an automatic entrant – with all fees paid – to this year’s $2-million Breeders’ Cup Distaff, which will be run at Keeneland in November.

Berrios, who is new to the Southern California racing circuit this season, was riding the bay mare for the first time.

Hector Berrios: “The race went exactly as we planned it. We wanted to sit behind the speed horses, then go get them late. She was running all the way. She was running well. Went we went past the half-mile (pole), we picked it up. She ran really well. She can run farther, too. I think she wants to run farther.”

Marcelo Polanco: “We talked about where she’s going to be because they scratched two horses and we had to change a little bit. We had her a little closer than we had before. Lucky everything worked. You know where we’re going…Keeneland.”