Blue Prize springs an upset to repeat in the Spinster Stakes 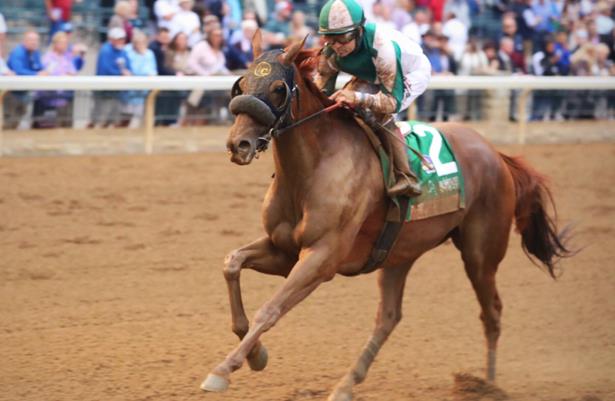 That proved to be a mistake to the tune of 7-1 as Blue Prize swept by those shorter-priced rivals and earn a return trip to the Breeders’ Cup Distaff set for Nov. 2 at Santa Anita Park.

Fourth in last year’s Distaff, only a length and a half behind winner Monomoy Girl, the 6-year-old daughter of Pure Prize is again getting good at the right time.

She’s a Julie set the fractions of 24.25 and 48.63. Into the stretch, however, Elate ranged up to her outside, and Dunbar Road took the rail to sandwich the pacesetter.

Dunbar Road ran widest of all in the field of five to repeat under jockey Joe Bravo in a final time of 1:50.30 for 1 1/8 miles.

"She broke on top," Bravo said. "She was really good -- really anxious."

"...I couldn't ask the race to set up any better. I was just tracking them."

Similar to in 2018, Blue Prize erred out near the finish line despite comfortable surroundings, with Keeneland her home track.

Elate -- who could go on to the Distaff and butt heads again with Midnight Bisou, or take on males in the Breeders' Cup Classic -- ran second. Dunbar Road finished third.

Jockey Jose Ortiz said Elate “was very comfortable, and we were in a good rhythm. She just got beat.”

Whit Beckman, assistant to trainer Chad Brown, surmised Dunbar Road's race: "She didn’t have the easiest post and trip on the inside, but she showed a lot of heart and made the best bid she could. The good news is she’s 3 and if all goes well, we’ll have her back next year."

Beckman said a Breeders' Cup decision would be made later for a sophomore filly with victories in the Alabama (G1) and Mother Goose (G2) earlier this season.

Bred in Argentina, Blue Prize runs for Merriebelle Stable. Ignacio Correas IV trains the mare, who entered off a confidence-building victory in Saratoga’s Summer Colony back on Aug. 18.

"I thought if she'd relax and had a target, she'd run big," Correas said.

Blue Prize was defeated in three other starts this season — twice by Elate — but hasn’t finished out of the money in what’s expected to be her final season on the racetrack.