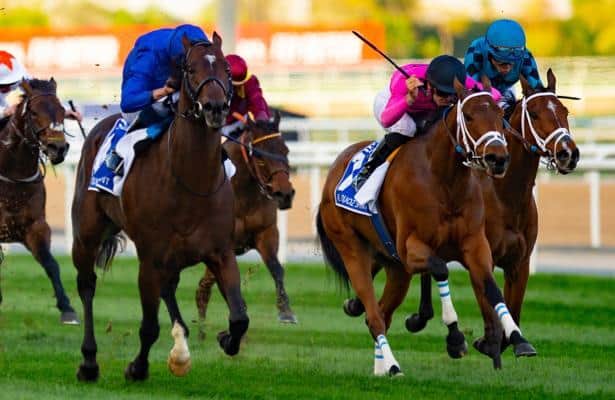 Godolphin’s 5-year-old Blue Point (IRE), winner of Tuesday’s King Stand Stakes (G1) at Royal Ascot, has been entered in Saturday’s six-furlong Diamond Jubilee Stakes (G1), headlining the final Group 1 of the Royal Meeting against 17 rivals and an automatic berth into the Breeders’ Cup Turf Sprint on the line through the international Breeders’ Cup Challenge.

The Breeders’ Cup Challenge is an international series of 86 stakes races, whose winners receive automatic starting positions and fees paid into a corresponding race of the Breeders’ Cup World Championships, which will be held at Santa Anita Park, in Arcadia, Calif., Nov 1-2.

As part of the benefits of the Challenge series, Breeders’ Cup will pay the entry fee for the Diamond Jubilee winner to start in the $1 million Turf Sprint, and will also provide a $40,000 travel allowance for all starters based outside of North America to compete in the World Championships.

Blue Point, trained by Charlie Appleby, successfully defended his King Stand title with a 1 ¼- length win over the favored Battassh (IRE) and improved his record this year to four wins in four starts, which includes consecutive Group 1 scores in the Al Quoz Sprint at Meydan in March to go along with Tuesday’s victory.

A bay son of Shamardal out of Scarlett Rose (GB) by Royal Applause, Blue Point is 10 of 19 lifetime.

He will be ridden on Saturday by James Doyle.

Regarding the decision to run in the Diamond Jubilee, Appleby told the Racing Post, “We were pleased with the way the horse has taken the race, we spoke about it at length yesterday and added the pros and cons.

"Blue Point seems to turn his A-game on at Ascot, he's held the track record over six furlongs there and he seems to be in the form of his life.”

If Blue Point wins Saturday, he would become the first horse since Choisir (AUS) in 2003 to claim both the King’s Stand and the Diamond Jubilee in the same week.

His 2019 wins have come in the listed six-furlong Unibet Cambridge Trophy Stakes at Doncaster on March 30 and the Duke Of York Clipper Lodger Stakes (G2) by 2 ¼ lengths at York on May 15 as the co-7-2 favorite.

Among his four wins in 11 starts, Invincible Army took the Merriebelle Stable Pavilion Stakes (G3) at Ascot in May of 2018, but finished ninth in the Commonwealth Cup (G1) at the Royal Meeting.

PJ McDonald has the mount on Saturday.

French-based City Light (FR) lost a heartbreaker at the wire against Merchant Navy in last year’s Diamond Jubilee fighting at the way to wire but missing by a short head, and ending a three-race win streak last spring.

Owned by Ecurie JI Bouchard/Madame I Corbani and trained Stephane Wattel, the 5-year-old by son of Siyouni (FR), ridden by Christophe Soumillon, has made just one start this year, finishing second to Inns of Court (IRE) in the listed six-furlong Prix Servanne at Maisson-Laffitte on April 26.

The Wesley Ward-owned and trained 5-year-old Bound for Nowhere, took the third spot in last year’s Diamond Jubilee, after breaking sharply and leading by himself in the center of the course during the first half of the race.

However, the bay son of The Factor could not sustain his drive to the wire and finished three-quarters of a length behind the winner.

Ridden by Tyler Gaffalione, Bound for Nowhere has won three times in 11 starts.

In his lone race of 2019, he finished second in the 5 ½-furlong Shakertown Stakes (G2) at Keeneland as the 8-5 favorite.

Phoenix Thoroughbreds and Cool Silk P’Ship’s Sands of Mali (FR) made his biggest career score last October at Ascot by winning the QIPCO British Champions Sprint Stakes (G1) by a length over Harry Angel at 28-1.

The 4-year-old of son of Panis, trained by Richard Fahey, finished second in last year’s Commonwealth Cup at Ascot, a half-length behind Eqtidaar (IRE).

Ridden by James McDonald, Sands of Mali finished third in the listed six-furlong Conditions Stakes at Hamilton on June 6 in his most recent start.

This year, the bay son of Equiano (FR), ridden by Oisin Murphy, finished third in the listed six-furlong Weatherbys Hamilton Stakes at Windsor on May 20.