Blue Grass connections will not be deterred by snowy forecast 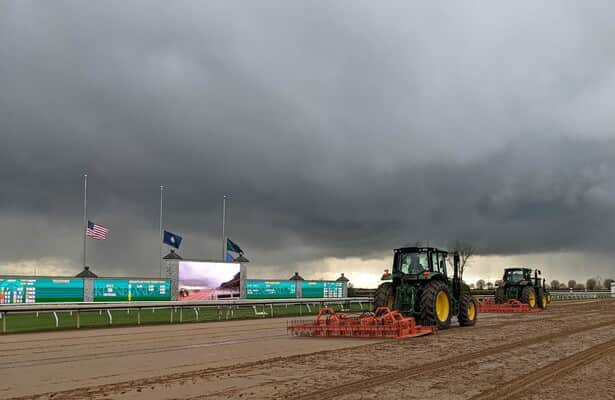 The weather forecast for Saturday’s Grade 1, $1 million Blue Grass Stakes looks downright lousy. But for some of the connections in one of the last major preps for the Kentucky Derby, things could be worse.

“I’d rather have bad weather and a better post position,” said Mike Maker, who trains Grantham (20-1), the maiden winner who drew the outside post for the field of 12 and was scratched on Saturday. “I don’t think the weather will matter to him.”

It may not be just rain that will hit Keeneland. The National Weather Service regional office in nearby Louisville predicted the cold rain that hit the track Friday would turn into a rain-and-snow mix overnight and linger until Saturday afternoon. Then it would turn back to rain after an accumulation of less than a half-inch of snow before post time, which is scheduled for 5:10 p.m. EDT.

The main track at Keeneland was sealed Friday night in anticipation of the bad weather.

In a season when 25 of the first 29 Derby dirt preps in the U.S. were run on fast tracks, Saturday figures to be unusual. Yet seven of the 12 starters have experience racing on wet tracks.

Two would-be starters have the most bad-weather experience. Grantham is 2: 0-1-0 on “off” tracks, including a second-place result in the Tampa Bay Derby (G2) on a course rated good. Still a maiden, Commandperformance is 2: 0-2-0 on wet going.

Play today with NYRA Bets!  Signup and get a $200 deposit bonus!

“Commandperformance’s debut was in the mud,” trainer Todd Pletcher said. “He seemed to run well. And I would think (stablemate) Emmanuel (9-2) would handle it if it comes up that way.”

Even though Emmanuel never has raced on a wet track, his frontrunning style could make him the only horse with clean air and no mud in his eyes going around the two turns and 1 1/8 miles Saturday. Starting from post 6, he does not figure to have the same trouble he did March 5. That was when his bid to go 3-for-3 to start his career ended with a wide-running, fourth-place finish in the Fountain of Youth (G2) at Gulfstream Park.

Morning-line favorite Smile Happy (9-5), first and second in his Grade 2 starts, comes back from a seven-week break. His stablemate Rattle N Roll (8-1) returns to the scene of his last win, which was Oct. 9 in the Breeders’ Futurity (G1). Both come from off the pace, and neither has raced on a wet track.

“Should be OK,” their trainer Kenny McPeek said succinctly.

If there is a horse who might be worse off with bad weather, it might be Blackadder (20-1), a deep closer who broke his maiden in a race that was taken off the turf and put onto a fast track Dec. 26 at Santa Anita. Then his former trainer Bob Baffert switched him to the synthetic track at Golden Gate Fields, where he won a narrow victory in the El Camino Real Derby on Feb. 12.

“Hopefully the weather helps me, because he is a long shot,” said Florent Géroux, who got the call from Blackadder’s new trainer Rodolphe Brisset to become the Quality Road colt’s fifth different rider in as many races. “I don’t think it should affect him. We’ll have to see the races (Saturday), but usually the track is no problem here when it rains.”

No one has more local knowledge of Keeneland’s main track than trainer D. Wayne Lukas, 86, who saddles deep-closing, maiden winner Ethereal Road (20-1). Also by Quality Road, the colt finished third Dec. 18 in a muddy maiden race at Oaklawn, where he was a close second to 75-1 long shot Un Ojo his last time out in the Rebel (G2).

For all the optimism about how their horses will do on what could be a sloppy track Saturday, it was not like the trainers were looking forward to it.