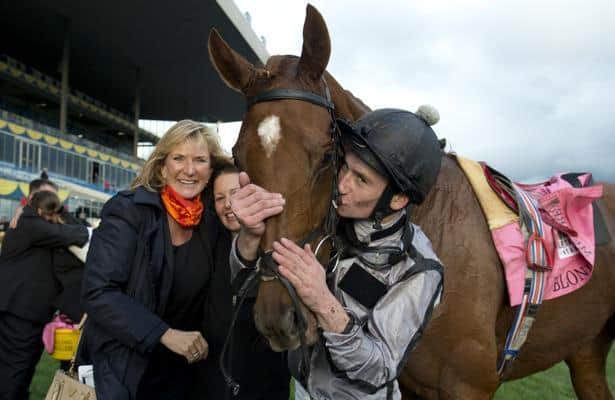 In her first race in North America since October of 2015, Blond Me made a strong outside move and drove on late to win Sunday’s Grade 1, $500,000 E. P. Taylor Stakes at Woodbine.

Blond Me out-ran Kitten’s Roar in the final furlong over soft turf, finishing 1 1/4 miles in 2:08.08 in the final race before the featured Pattison Canadian International.

Twice a Group 2 winner in Europe, the Irish-bred daughter of Tamayuz went off at odds of 8-1. She had made two previous starts domestically, in Belmont's Grade 2 Sands Point and Keeneland's invitation-only Queen Elizabeth II Challenge Cup Stakes two years ago.

"It was of course a big wish of mine to come back and hopefully to win the race," said owner Barbara Keller. "Blondie, as we call her, was good enough."

Behind Kitten’s Roar, Fourstar Crook got up for 3rd.

A field of seven contested the E. P. Taylor after the scratches of Sassy Little Lila (12-1 on the morning line) and Puca (20-1).

"You always get sick when you see the opposition because you think, 'Oh my God, they're so good,'" Keller said.

Connections knew, however, that Blond Me had run well over soft ground before Sunday. The mare was 11th in her previous start but had to be pulled up, Keller said. The race before that, Aug. 3 at Goodwood, she ran 2nd in Group 1 competition.

"When she was 2nd at Goodwood, the ground was far from ideal," said Anna Lisa Balding, wife of trainer Andrew Balding. "It was pretty sticky after a lot of rain the day before. We walked the track this morning. I think as everybody knows, soft ground in Canada's different from soft ground in the U.K.

"...Obviously it's a dream result, and it's just fantastic."