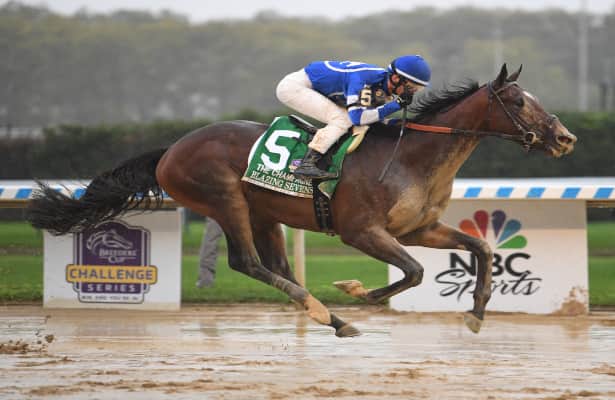 The Grade 1, $500,000 Champagne produced another unlikely winner on Saturday at Belmont at the Big A, with trainer Chad Brown’s Blazing Sevens closing down the center of a sloppy and sealed main track to prevail by 3 1/4 lengths en route to a potential start in the Breeders’ Cup Juvenile.

The 151st running of the Champagne, run at one mile on the main track for 2-year-olds, served as a Breeders’ Cup "win and you’re in" event for the $2 million Juvenile, which is slated for Nov. 4 at Keeneland at 1 1/16 miles on dirt.

Click her for Belmont at Aqueduct entries and results.

Blazing Sevens’ victory in the Champagne wasn’t the most implausible considering his wildly impressive debut at Saratoga Race Course on July 24, which he won by 6 1/4 lengths with an 85 Beyer Speed Figure. It was an upset nonetheless given his distant third-place finish last out in the Hopeful (G1), run in near identical wet-track conditions on Sept. 5 at the Spa. That effort led bettors to dismiss the son of Good Magic, winner of the 2017 Juvenile for Brown, and he was sent off as the co-longest shot on the board at 8-1 with slower debut winner Champions Dream.

“I was worried,” said Brown. “After the Hopeful, I told the owners I was planning on going to the Breeders’ Futurity (at Keeneland) and I called an audible last week after his work. I felt like he was doing so well and a legit Breeders’ Cup candidate. I was dying to get him around two turns, but I would rather have the five weeks’ rest and not four. So, I decided to ship him here and, sure enough, the hurricane came north and I was sick over it the last two days. I was already committed here, so I stuck with it and thankfully, he handled the mud here today. Maybe it was a Saratoga thing last time, I’m not really sure. He didn’t run bad last time, he just wasn’t himself. Today, he was moving through perfectly.”

At first, the public’s indifference to Blazing Sevens seemed prescient. New York-bred Andiamo a Firenze broke on top and led the field through sensible splits of 23.32 seconds for the opening quarter-mile and 47.09 for the half in rainy conditions while Blazing Sevens lagged at the back of the field of six.

After three-quarters in 1:11.86, Andiamo a Firenze continued to look strong into the stretch, but quickly ceded the lead to Verifying, who slipped through the inside to take command with Gulfport looming large on his outside. Blazing Sevens, meanwhile, forged his own path even wider on the track under Flavien Prat and took off in earnest after the top two, who had no answer for the dark bay colt in the last sixteenth as he drew off to a convincing score in a final time of 1:37.07.

Owned by Rodeo Creek Racing, Blazing Sevens returned $19 on a $2 win wager and increased his earnings to $368,750. The victory was his second from three starts for Brown, who won his fourth Champagne.

“It’s such a reward because he (Good Magic) was unlucky in the (2017) Champagne himself,” said Brown. “I thought he was very unlucky, actually. It was some good karma for us today that his son was able to get his head in front in the Champagne and win like he did. He’s been a wonderful horse to get along with. He’s all class. I want to thank Pete Bradley for picking him out and John and Carla Capek, the owners. This is their second year in owning horses and they’re lovely people, very deserving. If he comes out healthy, it’s on to the Breeders’ Cup.”

The Brad Cox-trained Verifying hung on for second, 1 1/2 lengths in front of Gulfport in third. Similarly to the winner, Verifying won his debut on Aug. 27 at the Spa with an 85 Beyer and was making just his second start in the Champagne. Gulfport, on the other hand, has developed a penchant for picking up minor awards in NYRA stakes, as he also has a pair of runner-up finishes in the Hopeful and Saratoga Special (G2) to his credit.

Andiamo a Firenze finished fourth, 4 1/4 lengths ahead of Champions Dream, who was followed home by Top Recruit.