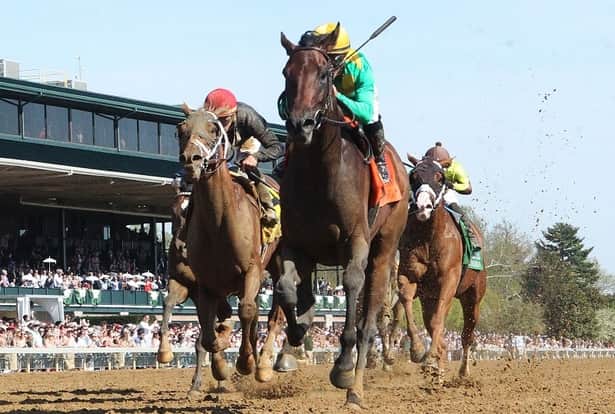 Saturday’s $200,000 Blame Stakes is the local prep race for the Grade 2 Stephen Foster at Churchill Downs on July 2. The Blame, which will be run at 1 1/8 miles, drew a field of eight older male handicap horses.Blame, who was the Champion Older Male Horse of 2010, had 9 wins from 13 starts and never finished worse than third in his career while earning $4.3 million. In 2010, the son of Arch won four times which included the Breeders’ Cup Classic (G1) where he handed Zenyatta the only loss of her career.

Here is a full-field analysis for the Blame with odds provided by the Horse Racing Nation staff. With post-time scheduled for 5:26 p.m. EDT, the Blame is carded as race 10 out of 11.

1. Proxy (8-1 – Tapit – Michael Stidham / Luis Saez – 10: 3-4-1 - $399,350) Proxy is in fine form for Michael Stidham with a recent third in the Ben Ali (G3) at Keeneland and a second the race before in the New Orleans Classic (G2). He made four starts on the 2021 Kentucky Derby trail but then took a break from April to February when he won an allowance at Fair Grounds before those aforementioned stakes races. Use underneath.

2. Super Stock (10-1 – Dialed In – Steve Asmussen / Corey Lanerie – 18: 4-3-3 - $1,255,677) This 4-year-old is the leading money winner and the only millionaire in the field. He actually broke his maiden in his third start in the Texas Futurity and since then has only raced in stakes. Last year, Super Stock won the Arkansas Derby (G1), the Ellis Park Derby, and the Zia Park Derby. In his career, he had just one a significant layoff and that was only three-months going from his juvenile campaign to the Kentucky Derby trail. You have to expect him to show up and probably finish in the top four. Use underneath.

4. Militarist (15-1 – Liam’s Map – Carlo Vaccarezza / Rafael Bejarano – 11: 2-1-2 - $160,655) Militarist was fourth in the Clark (G1) behind handicap horses like Maxfield, Happy Saver, and Midnight Bourbon. This year in two starts he followed an allowance fourth with a second at Churchill on Kentucky Derby Day when he came rolling down the stretch from last in a 12-horse field. The 5-year-old will need to take another step forward to be a serious contender in the Blame. Live longshot.

5. Dynamic One (3-1 – Union Rags – Todd Pletcher / Tyler Gaffalione – 2: 1-0-1 - $358,620) On the 2021 Kentucky Derby trail, this son of Union Rags had the lead and was beaten by a head in the Wood Memorial (G2). He did not handle the large field in the Derby but bounced back to win the restricted Curlin Stakes at Saratoga. After a poor showing in the Travers (G1) Dynamic One was off for six months. He returned to finish third in the Challenger (G3) at Tampa and second in the Ben Ali (G3) at Churchill Downs. Win contender.

6. Scalding (2-1 – Nyquist – Shug McGaughey / Javier Castellano – 6: 4-1-0 - $306,150) Scalding is a lightly-raced 4-year-old who broke his maiden in January at Gulfsteam and went on to win four races in a row including an allowance at Tampa Bay Downs and then the Challenger (G3) and the Ben Ali. His first win was on the front-end but more recent success came with a stalking style. Regular rider and Hall of Famer Javier Castellano stays on board. Top choice.

7. Santos Dumont (30-1 – Street Sense – Chris Hartman / Mitchell Murrill – 9: 3-2-2 - $235,147) Santos Dumont spent the winter at Oaklawn Park where he ran three times following a ten-month layoff. He began with a pair of allowance victories and then a third. The Blame will be his first try in stakes race. Overall, the Oaklawn Park has not carried over well to top tracks like Churchill. Toss.

8. Americanrevolution (5-2 – Constitution – Todd Pletcher / Florent Geroux – 7: 5-0-1 - $944,535) The 4-year-old New York-bred will return from a December layoff after winning the Cigar Mile (G1) with a stalking trip. Last year, he was third in the Pennsylvania Derby (G1) in his first try in an open-company stake. Trainer Todd Pletcher was looking to run Americanrevolution in a New York-bred stake at Belmont on Saturday that did not fill. He has been training at Belmont Park, so he will have to ship to Kentucky. Win contender.

Summary: The Blame Stakes drew a solid field of handicap horses where the top three choices are likely to produce the winner of the race.

Todd Pletcher trains two of them with Dynamic One looking to get a victory after a pair of top three finishes in graded stakes this year and Americanrevolution who last seen winning the Cigar Mile (G1) in December.

Scalding is certainly the horse to beat with a current four-race winning streak this year for Shug McGaughey. He beat Dynamic One twice in the Challenger (G3) at Tampa and most recently in the Ben Ali (G3) at Churchill.